In the heart of downtown Laguna, installations transform the area into an open-air exhibit for public enjoyment.

Public art plays a significant role in enhancing the beauty of Laguna. In fact, more than 65 installments accentuate all parts of the coastal city. In the downtown area in particular, its presence adds depth and character to the historic space and reinforces the town’s reputation as an artists’ colony.

On Forest Avenue, restaurants and boutiques are joined by public art pieces, each placed in an effort to enrich the experience of visitors and locals alike. They seamlessly blend into their surroundings while transforming the area into a walkable public gallery. From Coast Highway to City Hall, this bustling street offers five pieces from four talented artists. 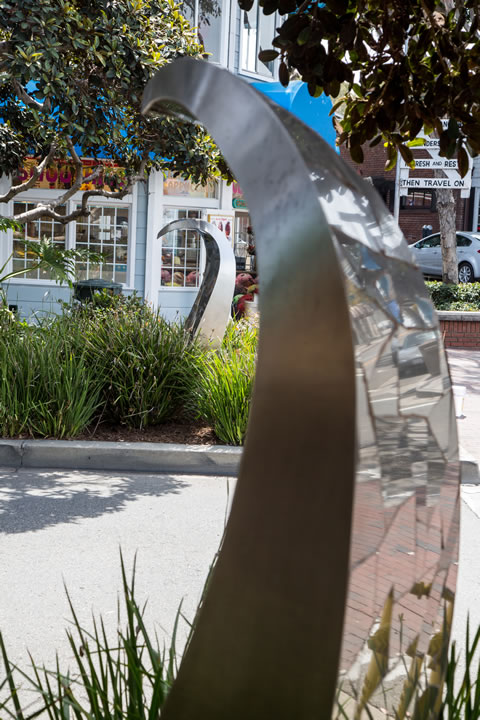 A Laguna Beach resident, Larry has created art for nearly 50 years. With his ability to manipulate metal and stone, he crafts extraordinary public pieces. Located at the entrance of Forest Avenue from South Coast Highway, North and South Waves serves as the starting point of Forest Avenue’s public art journey. The piece is made up of two abstract waves created from stainless steel and fragmented granite. Despite their size and intriguing appearance, these ocean waves blend in beautifully with the shrubbery from which they emerge.

While the piece has become a part of Laguna’s everyday beauty, there was some disagreement about its presence at first. According to Larry, back in 2003 there were objections by members of the City Council who believed that the waves might be too modern for the town. But despite that initial hurdle, the waves remain; the city has certainly embraced them, as well as modern expression.

For Larry, public art is his way of making a difference in the world and within himself. “It’s an opportunity to really feel some self-worth,” he says. “After doing this for some time, I’ve developed enough self-esteem to feel confident in myself and what I create.” 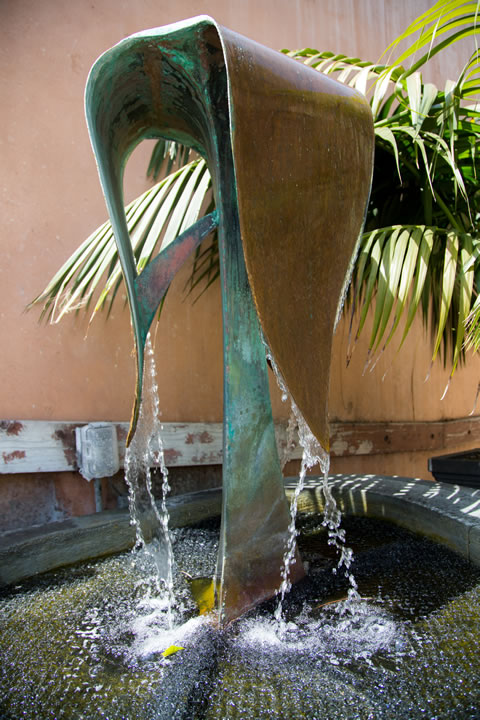 Larry’s second piece is a bit more elusive and understated than the first. Water Lily, a fountain made of brass, copper and stainless steel, is situated near the intersection of Forest Avenue and Glenneyre Street, discreetly located between two buildings. The structure comprises three brass leaves that direct water into an irregularly shaped, concrete basin.

It serves as a source of peace and tranquility a few steps away from the energetic avenue. Upon encountering the piece, visitors will notice sound emanating from the water that cascades down each brass leaf into a pool of water. Larry explains that the inspiration behind the fountain was that kind of sound. “When water falls from more than one source, you get harmony—like violins all playing at once,” he says. “By making [the fountain] with three leaves, I was able to come up with a really beautiful sound.” 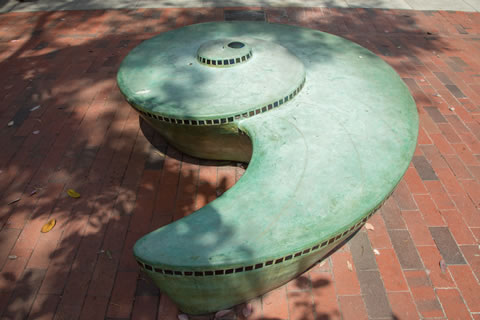 Carolyn is yet another longtime Laguna resident with decades of artistic experience under her belt. While she is often regarded for her unique and beautiful work with gold and silver leaf, Carolyn also sculpts, and she produced one of Forest Avenue’s most utilized public pieces.

Positioned at Forest Avenue and Glenneyre Street, the Chambered Nautilus Bench is one of a series of artist-designed benches scattered throughout the city. It offers passersby a chance to not only experience the art, but to relax and take in the rest of what downtown Laguna has to offer. The concrete piece is tinted turquoise and adorned with bits of tile that line its curvature. At the center of the structure is a dark, iridescent pearl, which—according to legend—grants wishes to anyone who places his or her hand upon it.

The legend, inscribed on a nearby plaque, tells the tale of Triton, his affection for a sea nymph and the creation of the most beautiful shell in the sea. It concludes with the statement, “Touch the pearl in the center of the shell and your travel wish will come true.” 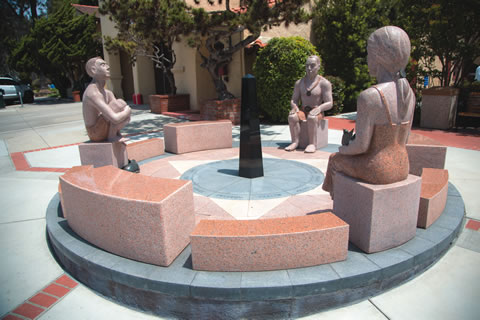 Linda is an Irish-born sculptor with a passion for public art. Her sculptures depict the human form, created with metal versions of earthy components like leaves, branches and vines. In contrast to her usual work, The People’s Council, located at City Hall, was carved out of granite. “Design-wise it was a little different than what I usually do, but it was an opportunity to make something that really interested me,” Linda says.

The piece features three figures, symbolizing men, women and children, sitting around a granite disk with a black obelisk placed in the center. Acting like a sundial of sorts, the obelisk’s shadow casts itself on the words carved into the disk, representing aspirations of the community. As the sun passes though the sky, the shadow travels over motivational words such as success, peace, love and justice.

For Linda, creating art for the public is a great responsibility that she takes very seriously. “As I often try to do with my art,” she says. “I wanted to create positive and uplifting images for the people of Laguna to embrace. They’re the ones who will be seeing it every day they walk by.” 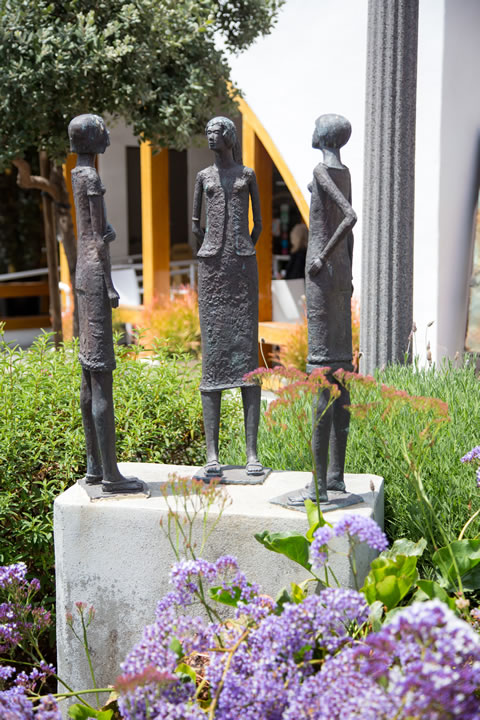 Ralph is a man whose passion for the arts has inspired him to make pieces for over half a century. A sculptor of bronze and stone—and a Laguna resident since 1966—Ralph creates moments frozen in time to be displayed for the world. He has used the Italian stone of the Carrara mountains as well as limestone, both of which he encountered while living in Europe. In more recent years, bronze has become a major interest for Ralph; he forms the sculpture with a malleable material, such as clay, and then a foundry creates the end result.

His Forest Avenue piece, The Discussion, is one example of his work with bronze. It showcases three tall women engaging in conversation, much like a scene one could actually spot while strolling down Forest Avenue. A project funded by the lodging establishments and city of Laguna Beach, The Discussion characterizes the artist’s aesthetic of featuring elongated figures in casual wear. The bronze figures can be found on the corner of Ocean Avenue and Forest surrounded by lush, vibrant greenery and flowers.