International artists, each with roots in their own cultures, transcend boundaries with the universal language of art.

“Lost in Translation Too”

The first “Lost in Translation” exhibit was such a success that JoAnne Artman has concocted a sequel: “Lost in Translation Too” is an eclectic group show featuring international artists, namely Belgian-born Anja Van Herle, Anthony Hunter from Great Britain, Pedro Bonnin from Mexico and Alberto Murillo from Spain. Each of these artists draws on the influences and culture of his or her native country, but weaves those inspirations into relevant, contemporary pieces that resonate both globally and locally.

“Whenever we’re all talking about different things, the conversation gets lost in translation, but the art doesn’t,” JoAnne says. “It all translates in the art. That’s the whole beauty of art. It has universal appeal.”

Each of the highlighted artists differs in distinct ways, yet there’s enough common ground between them to make sense as a group presentation. Anja studied makeup artistry and seriously considered a career in that field, so her highly stylized acrylic-on-panel paintings reflect the high fashion and beauty marketing concerns of her education. One painting, “Quiet Crystals,” is adorned with real Swarovski crystals that add a chic sparkle.

Pedro shares Anja’s fashion sensibilities in his hyper-realistic oil-on-canvas paintings that could be mistaken for photographs. Pedro uses his friends as models, yet freeze-frames them in gravity-defying poses that cause viewers to ponder the boundaries between reality and fiction.

Meanwhile, some of Anthony’s colorful work recalls that of Russian-born American abstract painter Mark Rothko. Others reference popular British artists of the 1990s and early 2000s, including Damien Hirst, for whom Anthony was an art fabricator. Anthony utilizes a gloss, scraping the pigment and “attacking” it with his brush.

Alberto combines acrylic paint with resin to create glossy abstract pieces with unexpected color combinations. His palette reflects the hustle and bustle of cities, from Madrid to Tampa, Fla., that he has called home.

Mabel Poblet is a young Cuban artist whose view of the world—and her native country—was shattered once she left the isolated Caribbean island. This changing outlook can be seen in the collages she makes from recycled material and small shards of mirror-like plastic, turning something broken and dangerous into something beautiful and reflective.

“Up until she was 24, she had never left the country,” says gallery owner Carla Tesak Arzente of Mabel, who’s now 28. “…  Her work represents the little shattered pieces of what she believed it to be, her fragmented view of the world. Her view out the window is fragmented; it’s in pieces, never [to] be complete or whole again.”

In the six years since she opened saltfineart, Carla has noticed sustained interest in international and Latin American art. “Art allows a view from the inside out, and you are seeing through their eyes,” she says. “As immigration continues to be a huge issue, art is a looking glass, a telescope inward to building bridges of understanding.”

Carla notes that Latin American work tends to be more conceptual than art from less-challenged regions. “Something about hardship tends to breed more interesting, layered, profound work,” she says. Also, in countries like Cuba, where political dissent is punished and citizens’ speech and behavior are closely monitored, conceptual art can be a way to obfuscate meaning from the authorities.

Carla and her Cuban artists are closely following the recent changes in relations with the U.S. in anticipation that conditions may improve for citizens of the island nation. “Hope is potent,” she says. “It’s morphing. It’s running through the veins of the Cuban population.”

An expanded area inside of saltfineart has transformed into a new gallery—RAWsalt—that specializes in works by emerging artists from across the globe, including those hailing from Japan, Russia, New York, Spain, France, California Cuba and Connecticut.

Among them is New  York-based Aya Kakeda, who was born and raised in Tokyo and paints intricate, enchanting scenes from the Toltai Island she invented as a child. Julio Labra, who attended Laguna College of Art & Design and now lives in Santa Ana, creates paintings and drawings of people and animals in midaction—some with a magical quality—leaving the viewer intrigued about the subject’s story. RAWsalt, which displays paintings, drawings, photography, multimedia pieces and other installations, celebrated its grand opening in April. (949-715-5554; rawsalt.net)

Forest & Ocean Gallery has teamed up with the Laguna Plein Air Painters Association (LPAPA) to showcase landscape paintings created in the great outdoors. As part of this partnership, which launched in May, the gallery is hosting painters from the association as artists in residence, with selected pieces rotating every two to four weeks.

Forest & Ocean is not only exhibiting the painters’ work on a regular basis, but is also allowing LPAPA to organize and host events such as juried shows. LPAPA was formed nearly 20 years ago to promote and support the plein-air art form and now includes approximately 300 members. The group’s invitational, held each year in October, brings the Laguna art community together with events for art lovers and collectors of all ages. (949-371-3313; forestoceangallery.com) 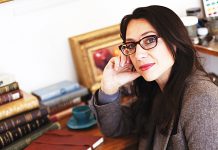