Two young, entrepreneurial brothers are creating holiday ornaments modeled after iconic landmarks for locals and tourists to treasure at home.

Local brothers Sawyer and Jackson Collins have come together to build their very own business. Inspired by the memorable landmarks and symbols of Laguna Beach, the duo founded Iconic Ornaments, designing holiday decorations based on the city they love.

Sawyer and Jackson, now ages 13 and 15, respectively, wanted tourists and locals alike to have something to bring home that is representative of Laguna. Last year, they designed a Christmas tree ornament that looks like the famous lifeguard tower at Main Beach and, this year, they are selling one fashioned after the beloved trolley cars that can be seen driving along Coast Highway in the summer.

Both designs can be purchased online at iconicornaments.com and locally at Bushards Pharmacy & Apothecary, Laguna Art Museum, Laguna Beach Books and Good Together House.

A portion of each purchase is donated to the Pacific Marine Mammal Center, one of the brothers’ favorite local organizations. Sawyer and Jackson have raised more than $2,000 to help the center in its mission to rescue and rehabilitate sick and injured seals and sea lions. In honor of their contributions, Sawyer and Jackson are going to be honored as Junior Philanthropists of the Year at the PMMC’s gala in October.

Laguna Beach Magazine: What inspired you to start making the ornaments?

Jackson Collins: We have a Leaning Tower of Pisa ornament on our Christmas tree every single year and it’s one of our favorites and it’s kind of the same design [as the ones we’ve created]. It’s made out of glass [and] paint with some glitter on it. … My parents got it in Italy when they went, before we both were born. But we love that. And, you know, it’s just like what you think of when you go to Italy, I guess. You want to visit that [tower]. And so we started thinking, … “Are there any iconic … structures in Laguna Beach that every single person knows?” We came across the lifeguard tower and we didn’t find anyone else that made it so, [we] kind of started from there.

How do you go about designing your ornaments?

JC: First of all, we like to take the … most iconic and well-known structures that we can find in Laguna and then, eventually, we’ll branch out to other cities. But for now, just Laguna. And we kind of just … imagine, if you have been to Laguna once or twice, what do you remember? And … every local will know of it, [too].

How are the ornaments made?

JC: We take pictures from every side and give the … dimensions … [to] our factory overseas, which is in China, and they can scale it down for us. Or, if they struggle to do that, we can, you know, scale it down. Kind of just give them the dimensions and photos and then we get a rough model … and then we can make changes from there.

Why did you decide to donate some of the money to the Pacific Marine Mammal Center?

JC: So, both Sawyer and I have been to … seal releases when we were younger. When I was in kindergarden, my class went to a seal release early in the morning at, I think it was Crescent Bay. It was just like really cool and … we like what they do a lot and they’re local.

Do you have another iconic Laguna Beach symbol picked out for next year?

JC: Beyond the trolley ornament, we haven’t really, you know, started looking at [ideas]. We have a few in mind, but not really anything close to choosing I guess. Kind of still up in the air.

What are your future plans for the business?

JC: Newport—there’s a lot of stuff in Newport we can go with. We haven’t really … [decided on] anything specific yet, but Newport has a lot of iconic structures. … For the near future, I think we’ll stick to California and Orange County, but who knows, we might go out further. [It] just depends how it all works out. 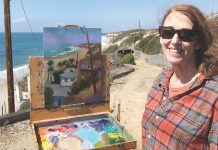