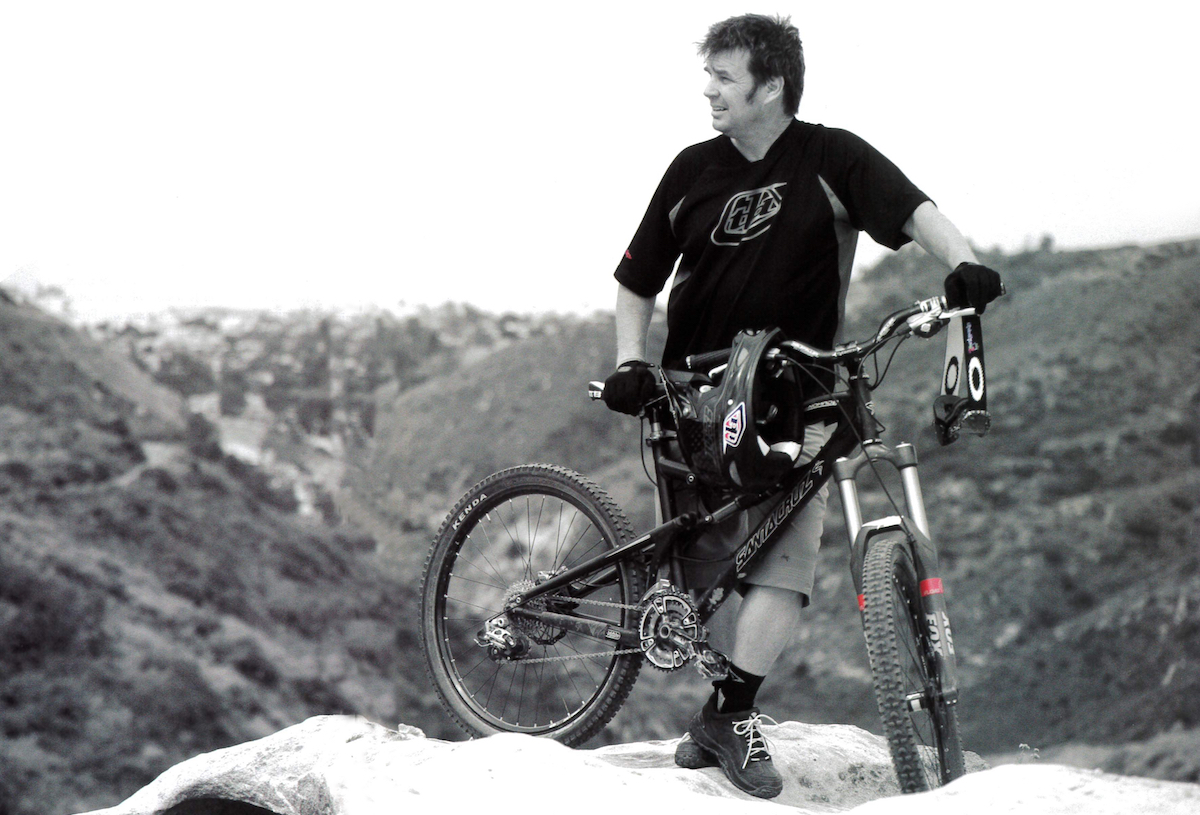 Troy Lee has transformed his lifelong passion of art and motorcycle racing into an impressive international business empire.

On paper Laguna Beach resident Troy Lee’s rise to the upper echelon of the business world appears unlikely. As a youngster he had an unstable family life, whimsically moving from town to town. He dropped out of school. He lived in a garage for 12 years, tinkering with motorcycles and painting his buddies’ helmets for little more than pocket change.

An undercurrent of pride permeates his voice as he talks about his unconventional upbringing. “My dad’s a gypsy,” says Troy. “He travels in his camper and paints and does whatever comes along.” Troy is dressed for work in his company’s brand of casual sportswear, a Troy Lee Designs retro plaid shirt and shorts. A few spiky strands of gray hair betray his age, although it remains easy to spot the wide-eyed exuberance of the 15-year-old kid who started his career by painting “No Smoking” signs. “I grew up in Pasadena and kind of bounced around from there,” he says. “My dad had an art studio on Coast Highway in Newport Beach, then he got sick of taxes and everything and said, ‘We’re outta here—we’re going to live off the land.’ ”

After stints in Mammoth Creek and Nevada City, Troy moved back to Orange County when he was 15, staying in a room behind Jim Busby’s race shop in Laguna Beach. It proved to be the ideal training ground for exploring his two loves: racing motorcycles and painting. “A lot of people in Laguna are into racing,” Troy says. “I started painting my friends’ helmets and then they just started showing up at my house. At the time it was $40 to paint a helmet. I grew up racing. I still race—but my buddies got faster, and they really put us on the map.”

Today Troy Lee Designs works on about 15 custom-designed helmets per week. At a cost of $2,000 or more, it may seem surprising there’s nearly a three-month waiting list. The helmets are created for clientele that’s typically made up of motorsports’ top professionals—men and women who demand the very best. A short list of racers who wear TLD helmets includes Juan Montoya, champion Formula One, Indy and NASCAR driver; Jeremy McGrath, winner of seven 250cc Supercross Championships; Jeff Ward, the first rider in history to win every major AMA motocross national championship; and Danica Patrick, IndyCar Series rookie of the year and NASCAR driver. 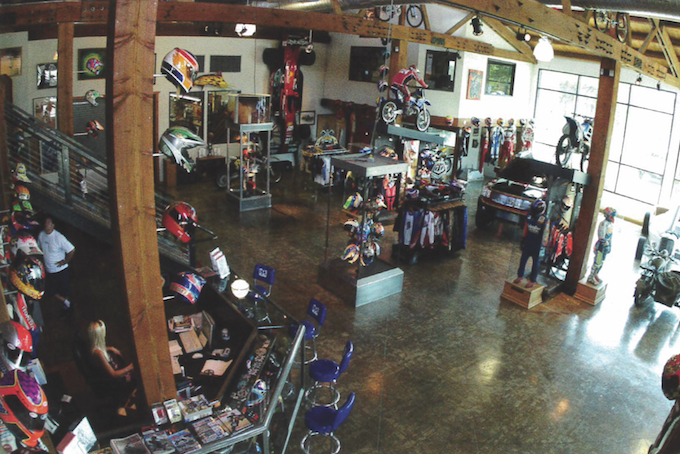 “We have about 230 racers that we wrap our arms around,” says Troy. “Everyone from mountain bikers and BMX to motocross, supercross and speedway to Indy cars and NASCAR. We have the Troy Lee Suzuki team in Canada the Troy Lee Kawasaki team in France and the Troy Lee Honda Red Bull team here.”

Designing helmets is still the most gratifying part of Troy’s business, he says. Backed by a team of talented artists who specialize in gold leafing, airbrushing, graphics and graffiti, Troy first ascertains what the sponsors want and then it’s about collaborating with the athlete to find the right artistic design. “Before I start, it’s usually about figuring out the logos—taking care of the sponsors who are paying them millions of dollars to race—and then they can use the rest of the canvas for their expression.

“The thing I try to do is make sure the helmet looks good at speed,” he continues. “Sometimes I’ve noticed there are helmets that look good from 5 feet away but don’t look good on the track. These guys are going 100, sometimes 200 mph and it needs to work visually.”

Often Troy develops a storyboard concept for a helmet’s special design. When Jimmy Vasser was racing in Mexico, they designed a helmet of metal flake, with pompom ball fringe and flashing lights, to evoke a Lowrider theme. They did a helmet for Scott Russell that has an Indian headdress in homage to his nickname, Screaming Chief. When Juan Montoya was racing on Halloween one year Troy and his artists made him a helmet with Day of the Dead graphics. McGrath built a whole shelf in his shop to display 63 of his helmets, Troy says. “Each one of them tells a chronological story. ‘Here’s my rookie year, here’s my first championship’—it’s very cool.”

Virtually every big racing team has some kind of charity affiliation to which many of the drivers donate their helmets. The helmet the Troy Lee Designs team made for Paul Newman was auctioned off for $47,000. “I encourage that,” says Troy. “I say, ‘You’re making a lot of money so why not raise some money for a local charity or hospital?’ A fan gets to buy a helmet worn at Monaco or something so it’s kind of cool—a helmet shield that still has the bugs on it! I recommend just keeping it that way.”

The Past, Present and Future of Racing

Eight years ago, the company leveraged their success on the track into their own line of motorcycle accessories in casual-wear apparel products. “That’s probably the biggest part of our business now,” Troy confides. “We don’t make boots or shoes, but we do everything from the ankles up—knee guards, knee braces, elbow guards, jerseys and pants. We have a production line for our own helmets, too; we design the helmets and have them done in the Far East.”

Troy hired the former vice president of DC Shoes to help guide a style of clothing that embodies the visceral thrills of motor sports as thoroughly as Quiksilver defines the laid-back coolness of surfing. “I’m not trying to break into anyone’s market,” Troy says to the comparison. “We’re doing something a little bit different. It has more of a motor sports feeling—that’s our market, our niche. Even the jeans, they have an extra piece of fabric around the knees.”

Until now, the company has sold its clothing and accessory products through distributors and a network of motorcycle and bicycle shops around the world. This summer, Troy Lee Designs will be opening its first retail outlet at the Lab Anti-Mall in Costa Mesa. “I’m excited about it,” he says. “It’s going to be three-quarters sportswear, a little bit about motorcycles and a little bit about bicycles.”

The custom-design work, though, is done right in their Corona shop. Its centerpiece is a 5,000-square-foot museum of motor-racing artifacts. Tourists from around the globe come by to see the memorabilia and the artists at work. Dozens of beautifully painted TLD helmets with racing history are on display. There’s a Métisse Desert Racer bike, the model favored by Steve McQueen in the landmark motorcycle film “On Any Sunday.” There’s a rocket-quick road bike used for sprint competitions at the Bonneville Salt Flats, an array of modern dirt bikes and Jeff Ward’s Del Taco Indy Race League car mounted on the wall. “It’s funny,” says Troy. “We have people who go to Disneyland and then come to our place. We have a big following in Europe and Japan.”

A Day in the Dirt

Every year over the Thanksgiving holidays, Troy Lee Designs and Elrod Racing presents “A Day in the Dirt,” hosted by the Hollywood Stunt and Film Community, at LACR in Palmdale. Although the race extravaganza is open to the public for entry and spectator viewing, it is focused on professional racers of all disciplines getting together with their brethren in the entertainment community. “There are more champions at this event than any other in the world because there’s so many coming from different demographics,” Troy says.

“Really, Steve McQueen started it,” he explains. “It was the only time movie studios really shut down. All the movie guys—makeup artists, stunt guys, directors—everybody loves to get out and play on motorcycles and have a good time. “We’ve been doing it for 13 years. Now it’s with the kids of McQueen—they bring all the movie studio people and I bring all the racers. It’s almost like Woodstock. The nightlife is just super—the movie people really know how to set it up.” 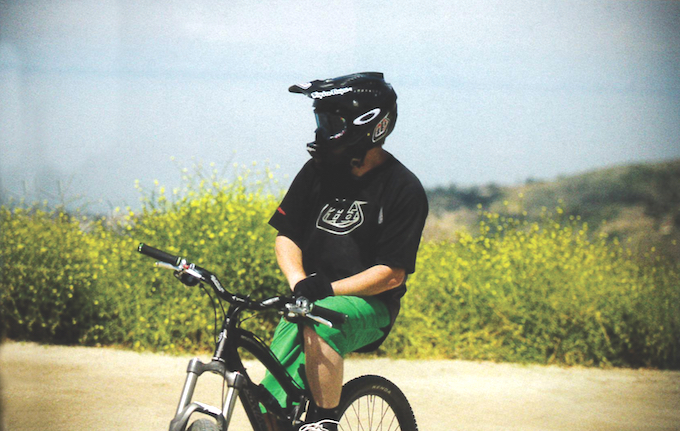 Last year more than 1,200 riders and 5,000 spectators attended the three-day event. Proceeds from Friday’s practice session are donated to the Steve McQueen Memorial Fund for Boys Republic. Event categories include Pro/Am, Mini, Vintage, Women, Stunt Team, Film Industry, Beginner/Novice, Vet Classic, Open, Moto-A-Gogo Team, and conclude on Sunday afternoon with the Coup de Grace Survival race. “It’s a great family thing,” says Troy, who is married with four children. “I try to drag them everywhere I go—just like my dad did with me.

Perhaps the sweetest fruit of Troy Lee’s success came when he was able to return to Laguna Beach.

“I’d bought a little house in Corona, where I’d started my business. But I always wanted to come back; I love it here.” Troy and his family had been living in town for seven years now. When asked about the lifestyle advantages Laguna offers, Troy’s reasoning comes faster than his brain can process it all. “Laguna is insane! It’s a super environment for being an artist—I think there’s over 100 galleries. I can ride my mountain bike—it’s like I’m out in the wilderness. . . I love the restaurants—they are amazing.”

Some of Troy’s preferred dining spots include Blue Laguna and French 75. “There’s not one I don’t like,” he insists. “If it’s not an amazing restaurant, it won’t make it in Laguna. Everybody does a really good job.” For a night out with the family, he recommends Sorento Grille. “We love the half off on Monday nights—that’s our new favorite.”

Troy’s ebullience for Laguna Beach becomes more thoughtful when he considers its residents. “You just run into some really good people, whether it’s riding bikes or whatever,” he says. “I’ve been hiring more and more artists from Laguna, some really creative people. Yeah, it’s great, we have five or six employees from Laguna and we’re always carpooling to work. I don’t ever want to take a vacation—Laguna is my vacation.”

On the 2010 article: While Troy Lee Designs may be headquartered in Corona, Lee’s Laguna Beach roots run deep. He and his family live in town near his eponymous boutique, where he’s hired local artists to paint custom helmets for many of the world’s leading racers.