A local favorite, La Sirena Grill in south Laguna Beach has offered fresh Mexican cuisine prepared with sustainability in mind for over a decade. Giving diners a clear conscience, menus are printed on recycled paper, compostable and biodegradable materials are used in the to-go packaging, and even the walls feature reclaimed wood.

It’s the quality food, however, that keeps customers coming back to both the South Coast Highway restaurant, which opened in 2002, and the first location established in 1999 on Mermaid Street. Dishes are made with organic rice and beans as well as humanely raised meat, from grass-fed beef to free-range chicken without the use of hormones or antibiotics.

Although the daily specials change and there may be updates from time to time, La Sirena’s success proves that if something isn’t broken, you don’t need to fix it. The menu ranges from tacos, burritos and nachos to enchiladas, fajitas and tortas (a Mexican sandwich), plus a complete breakfast lineup. All sauces, salsas and guacamole are made from scratch, some daily during the busy summer months, as well the long-simmered spicy chicken tortilla soup. The flavorful, tomato-based broth—chock-full of tempting pieces of chicken, onions and peppers, and topped with melted jack cheese and strips of crispy tortilla chips—will have you scraping the bottom of the bowl to get every last drop.

One of the most popular entrees is the blackened wild salmon salad. It’s a light and refreshing mix of organic greens, avocados, cucumbers, tomatoes, bell peppers, red onion, papaya salsa and wild Alaskan salmon seasoned with just the right kick that balances the sweet-yet-tangy lime-cilantro dressing without overpowering it.

Another top choice is the beer-battered Baja fish taco made with the daily catch such as wild Alaskan pollock. The warm, slightly crispy fish is tucked into a soft corn tortilla and topped with “Sirena cabbage,” a blend with onions, cilantro, pico de gallo and a zesty aioli sauce that will leave you craving more.

Both the salad and taco options are perfect after a day at the beach or for a casual meal with friends. Order at the counter, then settle into a booth or grab a seat at the bar—there are 20 craft brews on tap to choose from. Ballast Point’s pale ale and Sculpin IPA are always available, in addition to 18 other rotating taps featuring some regional breweries from San Diego and San Clemente. Wines from Tablas Creek Vineyard are also on draft, while signature margaritas can be mixed at the bar. For a nonalcoholic beverage, you can’t go wrong with the “aguas frescas”—a thirst-quenching juice blend that translates to “fresh waters”—in both Jamaica (hibiscus tea with a cranberry-like taste) and watermelon-strawberry flavors.

If you’re still seeking something sweet at the end of your visit, head back to the counter to select a huge cookie from one of the canisters: The coconut-butterscotch is a creative combination that’s big enough to share, but you’ll probably want to keep the whole thing for yourself—go ahead, we won’t tell.

Tip: Try an off-menu item: sopes. The traditional, street food-style Mexican snacks feature a fried masa base loaded with meat and other toppings. 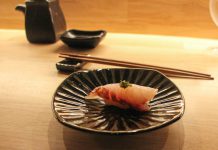 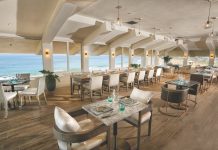 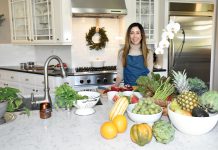