One Laguna, a high-tech interactive media center, will soon open its doors for the public to explore deeper connections with the city of Laguna Beach. Inside, visitors and locals alike can discover what the community has to offer while snagging local deals and offers through state-of-the-art technology, including numerous high-definition touch screens that guide users through shops, restaurants, galleries, beaches and other points of interest throughout the city. This interactive directory, called “Perfect Laguna,” includes every business in Laguna Beach with multiple touch points of information.

These are just some of the innovative elements of One Laguna, which is slated to open later this month. One Laguna is located in the heart of Laguna Beach on the second floor of 225 Forest Ave. Through a partnership with Firebrand Media, Laguna College of Art & Design’s newest gallery occupies the space’s first floor. 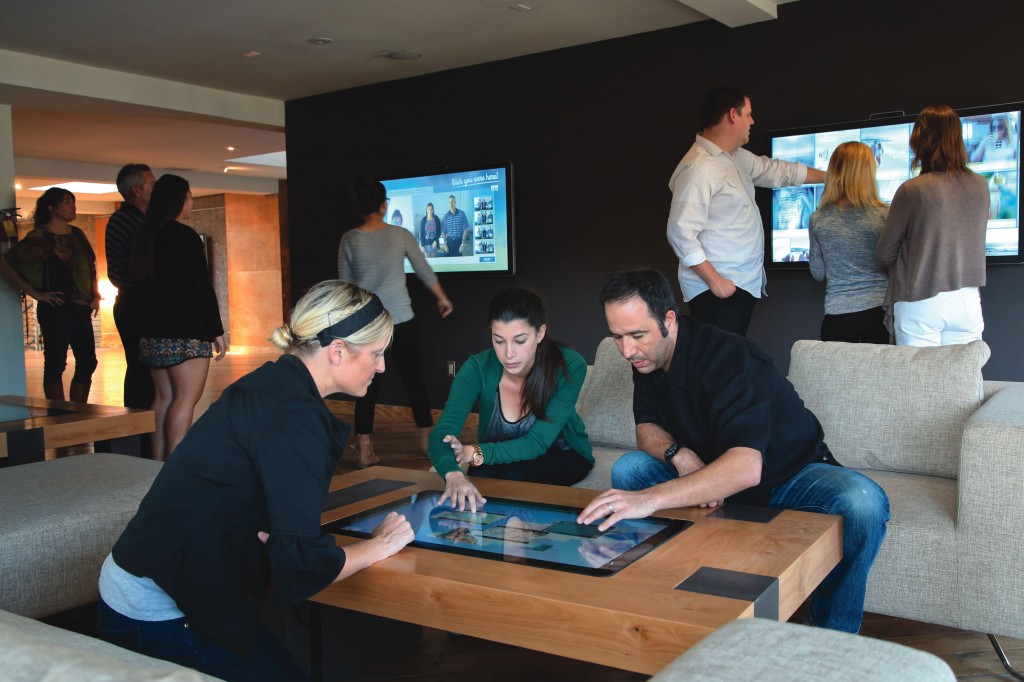 One Laguna is the brainchild of Allan Simon, chairman of Firebrand Media, which publishes Laguna Beach Magazine. Allan sought to help businesses throughout the city by creating a hub for locals and visitors to learn about everything the community has to offer, get great deals and check out novel technology and art. After about six months from conception to installation, it’s finally time to open.

“I’m very excited,” Allan says. “It’s been an idea that’s germinated into reality. … I have very high hopes for it. … We want them [the public] to see it and feel it and touch it and talk about it. In the summertime, we absolutely expect lines down the street.”

Over the next year, there are plans to add e-commerce—the ability to purchase items or theater tickets, or book a hotel room from the center’s computers—as well as real estate and rental listings and possibly even a 3-D printer.

“We want to be a space for thinkers and tinkerers … and a gathering place for locals,” says project manager Marc Ostrick, an interactive and digital media specialist.

The urban, loft-like space features exposed brick walls, iron beams and skylights. In the back, a large window creates a sunny, inviting space for the social media lounge, where a livestream of Facebook, Twitter and Instagram feeds will display posts and photos with hashtags such as #OneLaguna and #LagunaBeach on a 55-inch screen. Visitors can “get coffee, kick back and enjoy all the feeds and images that celebrate Laguna,” Marc says. 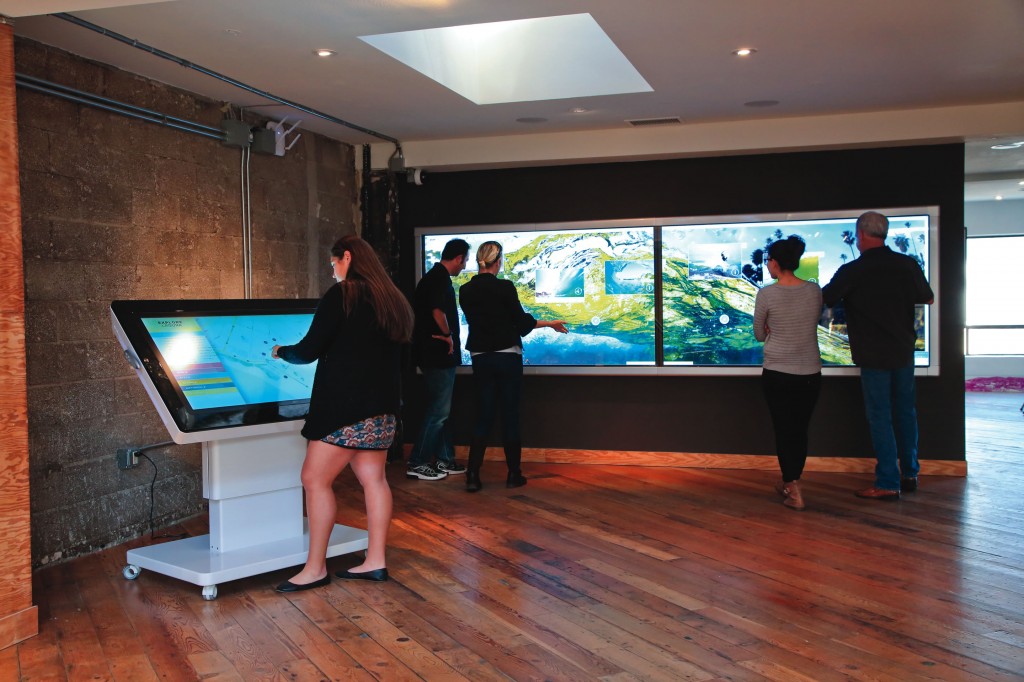 Next to that display, another screen equipped with a webcam will allow visitors to take a photo of themselves and mix it with Laguna scenes to create a custom digital postcard that can be emailed to friends or posted on social media sites.

Two coffee tables with embedded screens will serve as a virtual gallery highlighting local art, photos and videos. Eventually, visitors will be able to purchase artwork right from the screen if something catches their eyes. 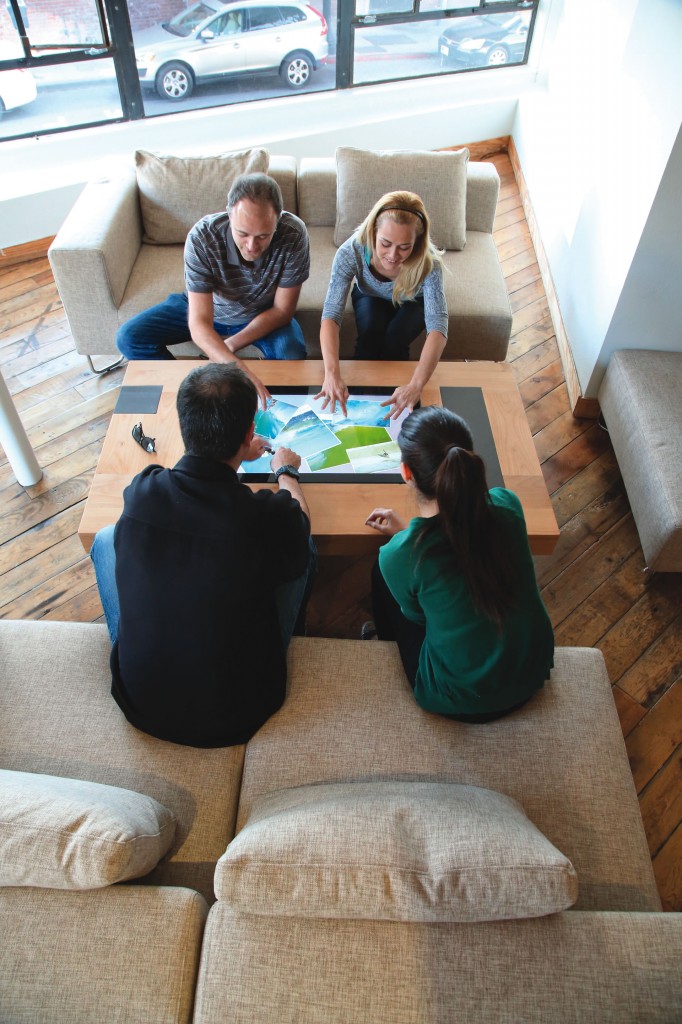 “We want it to be a useful resource that’s a lot of fun,” Marc says of the center. “It’s a fun way to kind of get introduced to a town and the spirit of the community … and celebrate the culture and lifestyle that make Laguna what it is.”

In the main part of the room, two 84-inch, 4K (ultra-high-definition) screens overlaid with a custom piece of glass will allow 32-point interactive touch. That means 32 fingers can be tapping the screen at one time to play videos, enlarge photos or learn about the photographer or landmark featured in the picture. When not in use, the screen will show 4K video such as undersea footage by MacGillivray Freeman Films, a Laguna-based studio and the world’s largest independent producer of IMAX films including “Everest,” the highest grossing IMAX film in history.

Meanwhile, two tables embedded with computer screens will feature clickable maps with information about places to eat (both restaurants and bars), play (beaches, trails, festivals, et cetera), stay (hotels and resorts) and shop (stores, spas, galleries and more). Four large, wall-mounted screens will offer similar information. Visitors can save details to their One Laguna account, send them to a smartphone using near field communication (a quick data transfer over radio waves when devices are in close proximity) or print them out to take home, creating a handy resource for their time in the city. Friendly, knowledgeable staff members will be available to assist. For even more insight into the community, tablet computers will allow users to view digital versions of Firebrand Media’s magazines and newspapers.

“One Laguna is a natural extension for Firebrand,” says Steve Zepezauer, Firebrand’s CEO and editorial director. “From the beginning, our goal has always been to celebrate Laguna and connect customers to businesses.”

While making those connections, One Laguna provides an opportunity to test the limits of new technology that’s not widely in use, according to Jonathan Tavss of Scarlet Terrier Productions, who has overseen the project’s technological development and implementation. Jonathan was working on similar projects with next-generation technology as part of the NG Connect Program, a collective assembled by Alcatel-Lucent.

He says One Laguna aims to take interactivity with smartphones further than others have. And, the center’s ever-changing aspect makes it stand out from other museums that use multitouch screens with static data. In the summer, One Laguna will turn a spotlight on seasonal events such as the Festival of Arts, Pageant of the Masters, Sawdust Art Festival and surfing competitions. Even from day to day, videos will change, the social media stream will always be fresh and content may switch to nightlife options as people begin to make plans in the afternoon.

“People can come back and have a different experience every single time,” Jonathan says.  “ … The opening is just the beginning. The really cool part is when you come back and see how things have changed. … It’s a living product.” LBM