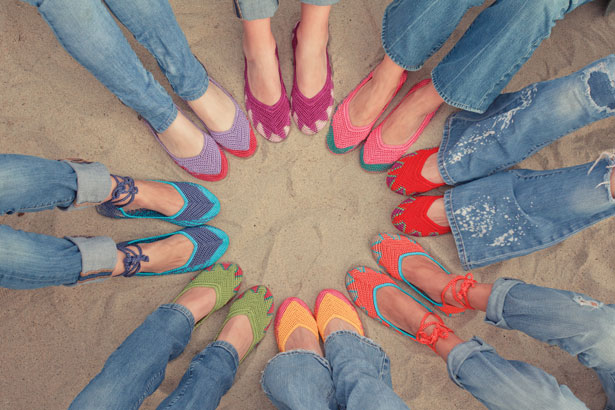 ‘Celebrate the Humanity of Homemade’

So reads a quote along the wall of Buy Hand, a cute new shop on Coast Highway that carries handcrafted and one-of-a-kind treasures for the home, body and soul. Inspired to do more than just sell items, but also foster the community through her business, owner Kativa Reddy says, “I believe every little item has a bit of soul of the person who made it.” In a collection that represents 16 artists from Southern California—including a few from Laguna—find fun items such as crocheted clothing and children’s toys, home décor accessories, jewelry, tote bags, stationary and pet items coming soon. (670 S. Coast Hwy., Unit B; 949-715-0515; lagunabuyhand.com) —A.B.

When Laguna locals and fashion veterans Jennifer Samson and Nicole Halpern discovered the art of India’s hand-crocheted flats, they immediately knew they had to have them—and so would every other “chic and easy” SoCal woman. The design duo soon began crafting a collection for the U.S., and Painted Bird—the name inspired by the bird of India, the peacock, and its beautifully vibrant colors—took flight this summer. Labeled after Laguna’s streets, each style is available in three different patterns, an array of colors—from “Broadway” black to “Sunset” orange (dyed chemical-free)—and both an open flat and ankle strap. “They’re super comfortable, and with a global look and feel, can be worn anywhere and with anything,” Jennifer says. “They’re the perfect everyday accessory.” Find them at high-end boutiques like Laguna Supply, or online at shoppaintedbird.com. Look for a fun metallic collection in the fall. —A.B.

Phillipe Horvath, whose environmental design studio is based out of Laguna, presented his innovative sustainable design project, TCORE, at the EDF Pavilion in London’s Olympic Village. U.K. energy company EDF lauded Phillipe’s design in the group’s Sustainable Design Challenge held in Paris last summer, naming TCORE one of the eight finalists in the competition. TCORE is a pre-fabricated modular design unit consisting of a utility core (including a tankless water heater and a washer/dryer), a kitchen and a bathroom—all made from recycled aluminum and topped with solar panels. By bundling a residence’s energy-dependent technical and mechanical functions into a centralized and efficiently designed unit, TCORE significantly reduces day-to-day energy waste. (Horvath & Associates, 3275 L1 Laguna Canyon Rd.; 949-290-9085; phillipehorvath.com) —H.O. 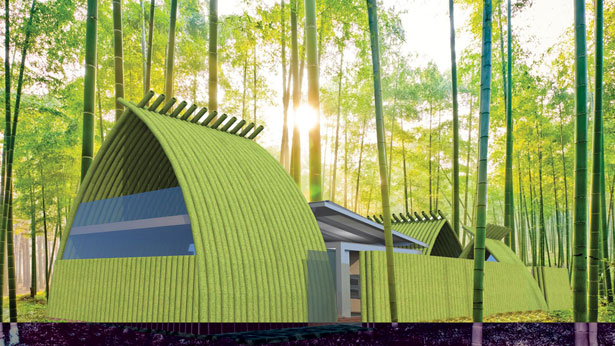 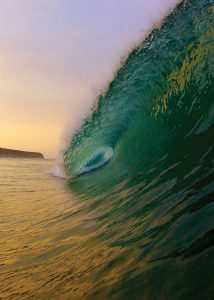 Laguna Teen Shoots For The Stars

Laguna local Quinn Matthews boasts an impressive résumé for a 17-year-old: As a surf photographer, he’s worked with companies like Jack’s Surfboards and Freak Traction and publications including Surfer Magazine and Surfline. Hurley has made some T-shirts from his designs after he won an environmental design contest for the group’s H2O campaign the last two years. The up-and-comer designs and digitally self-publishes Rail, a quarterly surf magazine featuring the best of his own surf photography. His photos also spent time this summer on the walls of popular local hangout Zinc Café & Market.

Like any 21st century self-starter, Quinn demonstrates an impressive command on social media. You can check out his work on his website, quinnmatthewsphotography.com, or on his Facebook, Tumblr or Flickr—just search Quinn Matthews Photography. —H.O. 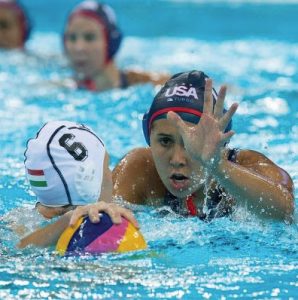 Water polo gold medalist and Laguna Beach resident Annika Dries has come a long way since she was a Breaker, though she was a stand-out even then—she was named both Orange County Player of the Year and CIF MVP in 2009, the year she graduated high school. The nation’s top college water polo program at Stanford University was quick to recruit her, where she continued to win game after game. She earned the MVP spot in the 2011 NCAA tournament, as well as national collegiate player of the year.

Annika’s Olympic path began early on, when she became the youngest woman to train with the U.S. national water polo team in 2009. She took a hiatus from her time at Stanford in order to train full-time with the team, and she officially joined the ranks in May. The second youngest on the U.S. roster, Annika joined a team with a solid record: The U.S. is the only team that has medaled in each Olympics since water polo was added to the lineup in 2000. This year, the team scored a gold medal win. —H.O.

According to a report called “Healthy Places, Healthy People” published by the Orange County Health Care Agency, 54 percent of ninth grade students in Laguna Beach Unified School District have tried alcohol. Laguna Beach and Santa Ana Unified, also at 54 percent, have the highest percentages in Orange County and exceed the state average of 47 percent. In the same report, Laguna Beach was found to have the highest percentage of OC ninth graders that have tried smoking, at 30 percent. The California average is 20 percent. The report is available online at ochealthinfo.com.

In an interesting contrast, a study released in June by the UCLA Center for Health Policy Research and the California Center for Public Health Advocacy used data from the 2010 California Physical Fitness Tests to find the percentage of obese or overweight children in 250 California cities. The study, titled “Overweight and Obesity among Children by California City-2010” reported on fifth, seventh and ninth graders, and found that Laguna Beach had the lowest obesity percentage in OC, at 14.3 percent. The report is available online at healthpolicy.ucla.edu. —L.D.

Her Roots Are Showing 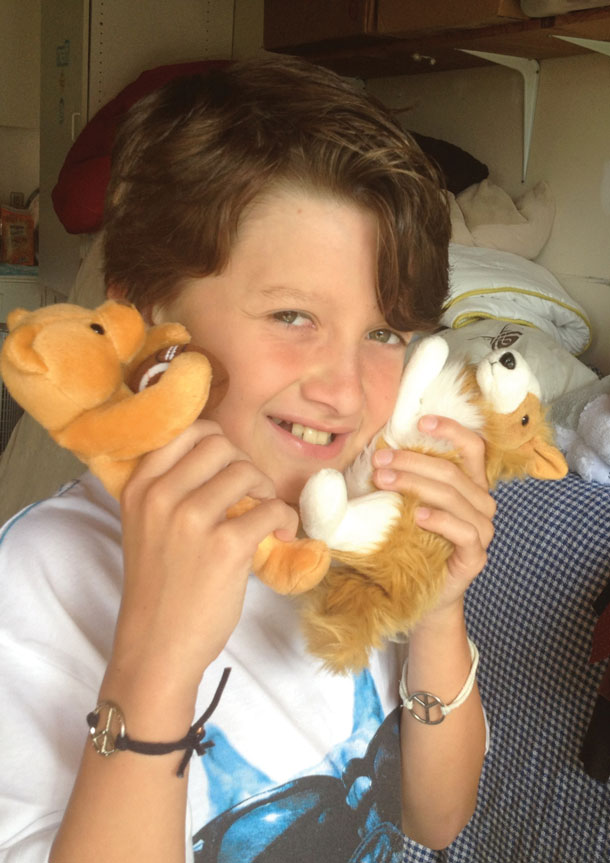 Laguna Beach residents offered a wave of support when Sabrina and Michael McMurray, locals and owners of the beloved Penguin Cafe, got news that their son, William, has an inoperable and fast-growing tumor called brain stem glioma. The family does not have medical insurance.

In additional to unofficial offerings of support and another fundraiser in early August, Sabrina’s friend, resident Kelly Fontenot, organized a fundraiser for the family  held at Mozambique Aug. 14. For updates on William’s treatment, and for more information about the family and how you can help them, visit the McMurrays’ blog at ourlil.com/william. There is also a donation box at the Penguin Café, located at 981 S. Coast Hwy. —H.O.

Something Borrowed at Montage 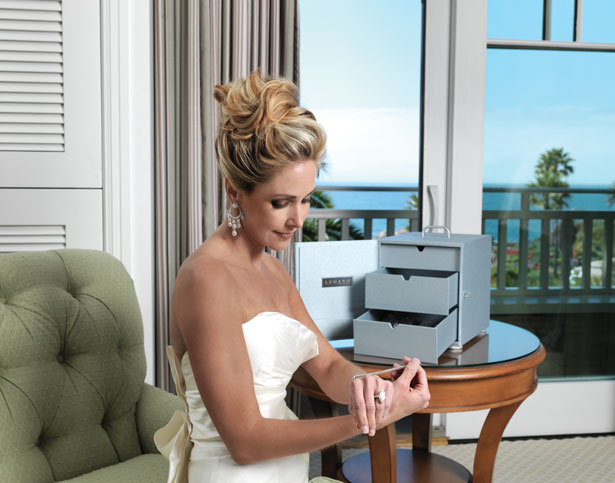 Montage Laguna Beach is offering the “Something Borrowed” program this year that gives brides-to-be the opportunity to borrow luxurious and beautiful jewelry for their special day. The resort has paired up with jewelers such as Lugano Diamonds so brides may borrow their products, leaving brides only to search for “something old” and “something blue.” Brides that hold their wedding at any Montage property between April 11 and Dec. 30 will be able to experience this once in a lifetime opportunity. The jewelers are offering many glamorous items, including diamond encrusted brooches and bracelets inlaid with precious gems. The bride can work directly with her Montage Hotels & Resorts wedding specialist to select items, and couples have the opportunity to make a lifetime commitment to their selected jeweler for memories that will last long after the wedding. (montagelagunabeach.com). —L.Z.

Local Mark Edwards, 22, has created a clothing line for the followers of the electronic dance music scene. At a young age, Mark is diving into entrepreneurship with products that inspire street wear, music and creativity. “I was looking to be on the cutting edge of fashion,” Mark says. “I wanted to come out with something new.” Dlife is an expanding brand that currently includes LED hats, T-shirts, illuminating miniature billboards  and LED ice cubes. Mark draws much of his inspiration from music, his lifestyle and his artistic hometown. “Laguna residents are energetic and youthful. People out here want what’s fresh, new and different,” he says, also mentioning the boutiques and shops that line Coast Highway. Mark has big dreams for his clothing line. “We would like to see this brand have a contagion effect,” he says. So far, Dlife is slowly finding itself among the electronic dance music scene, and his products are currently available in limited quantities at Family Sports in La Mirada.(dlifebrand.blogspot.com) —L.Z.

As surf industry globetrotters, locals Brandy Faber and Steven “Sli Dawg” Chew know a thing or two about wine. “Some of the best wine regions are near the greatest surf locations,” Brandy says. “When the waves are no good … you go to wine country.” So when the pair was approached by fellow Laguna native, Jeff Farthing—now a winemaker in Lodi and Napa—about starting a wine company that would combine each of their skill sets (Brandy’s marketing expertise and Steven’s artistic talent) and mutual love of the “California lifestyle,” Purple Corduroy was born. A double entendre, the name symbolizes both epic surf (purple blobs on the surf forecast) and vineyard rows dotted with purple grapes. Their dream came to fruition this May when it released its first varietal, Red Siren Zinfandel, with a bottle depicting a drawing of a red siren soaring over three swell lines and clutching “sacred grapes.” Available at La Sirena (south), Dizz’s As Is, Olamendi’s and Laguna Beach Wine Gallery, the zin pairs well with barbecued California cuisine. Look for a white blend in the near future. (purplecorduroy.com) —A.B.

Fun-Sized Parks for All

Laguna resident and the parks’ landscape architect, Bob Borthwick, worked with a low budget to make this happen. “Frontage Road Park will provide an attractive little place for the neighborhood and continue the beautification process of Laguna Creek,” Bob says. “Park Avenue View Park will continue the landscape from the Canyon.” —V.Y. LBM