Laguna Outreach for Community Arts exposes locals to the joys of creativity. 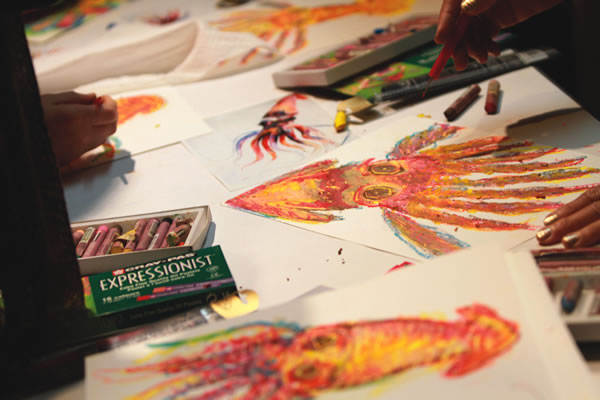 Despite serving approximately 20,000 people since its inception in 1992, Laguna Outreach for Community Arts (LOCA) shows no signs of slowing down or becoming staid in its programming. Instead, the arts organization continues to add to its roster new and innovative offerings for participants of all ages, from preschoolers to senior citizens. LOCA’s staples currently include Senior Art Escapes workshops at the Susi Q Senior Center, Art and Sea Experience sessions presented in conjunction with Laguna’s Pacific Marine Mammal Center, botanical art classes at the Laguna Nursery and, of course, programs at four local public schools—Laguna Beach High School, Thurston Middle School, Top of the World Elementary School and El Morro Elementary School.

“[LOCA] is a true grassroots organization, founded in Laguna Beach … and dedicated to art education for the community,” co-founder Mada Leach says of the nonprofit. “It takes art out of the elite kind of place—out of the gallery, out of the museum—and places it squarely within the community. We’ve gone from being strictly local to drawing from all over Orange County—most of Orange County has been impacted.” 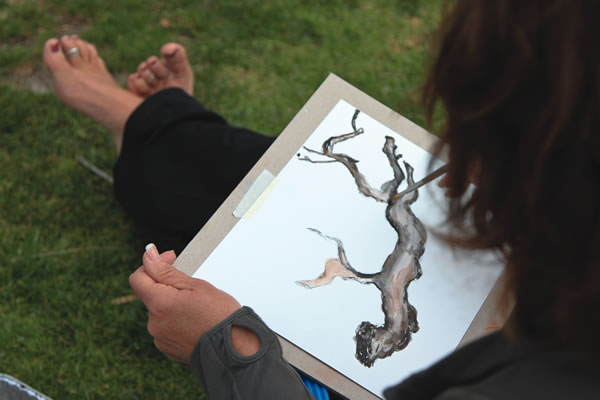 Since the organization’s founding 21 years ago, LOCA has primarily remained a homegrown effort to increase arts education throughout the local community. Founders and artists Mada and Anne England first met more than 20 years ago at the Festival of Arts. Becoming fast friends, the two women lamented the fact that local schools’ art budgets had recently been cut and resolved to do something about the loss. “We knew nothing about nonprofits but wanted to get artists interested in teaching and get them funded,” Mada says.

Sue, who is now acting president of LOCA’s board of directors, recalls the group’s motivation to help expand the fledgling organization: “We realized that art education wasn’t as prominent in schools as it had been,” she explains. “We wanted to form a group that can help schools and community needs.”

Initially, LOCA operated without a designated home base. Paperwork and documents were stored in individuals’ homes, and Mada housed a portable printing press in her garage. “One of the early people [involved], Mary Bryant, had all of our files on a little porch under a tarp,” Mada says. “We were really bare bones.” Along the way, a local Wells Fargo branch stepped in to loan LOCA an on-site office and storage space.

Once the fledgling organization had established a physical presence in the community, its membership substantially grew—and continues to grow, with nearly 100 members and 25 to 30 artists on the in-house teaching roster. “We are always on the lookout for artists,” Mada adds. “New artists coming to town reach out to us, like [textile artist] Gretchen Shannon, who moved to Laguna from Philadelphia.” 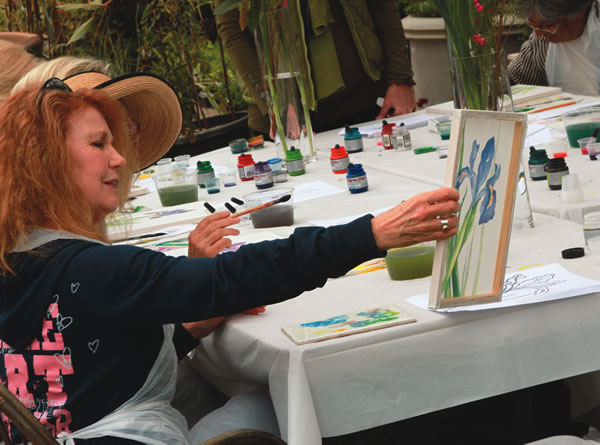 “Great ideas come forth from LOCA and can be implemented quickly,” says Sherry Bullard, LOCA’s educational project coordinator for the past 12 years. “We are passionate about art education and mentoring new generations of artists. The important part is developing new programs.”

One of the nonprofit’s most popular programs is a workshop in making personal shrines. Taught by mosaic artist Carolyn Machado, the class allows students to produce artworks that are deeply connected to their lives. For example, Carolyn’s personal shrine includes childhood photographs juxtaposed against a mirror that literally reflects her life now. As her canvas she chose an old jewelry box, but other students use cigar boxes, silver trays or other objects as the foundations for their shrines. “It’s all about them, about bringing personal things to class,” Carolyn explains. “Or, it could be a gift—for a daughter or a mother.

“LOCA looks for things that are not offered around town. … The opportunity [to get involved] is there for everyone,” she continues. “It’s an opportunity for artists and non-artists to explore the arts on some level—whether they take the knowledge home and keep going doesn’t matter. It’s the exposure. It takes the mystique out of being an artist and gives [people] an appreciation for what we do.”

Other LOCA mainstays include a solar printing workshop with Peter Tiner, a retired Laguna Beach High School teacher, and a digital photography class that helps students keep abreast of changes in technology. Meanwhile, a junior curator class offered in the past at Laguna Beach High School taught students the basics of curating a professional art exhibition. LOCA’s most recent endeavor, a partnership with the Woman’s Club of Laguna Beach, is called the Intergenerational Literacy Project. The initiative pairs second-graders with trained senior mentors to collaborate on creating fully illustrated books.

Last year, LOCA partnered with the Laguna College of Art & Design (LCAD) to develop a mentorship program for college students. The program offered part-time, paid positions to students who collaborated with LOCA teachers to present workshops at the senior center. “Our thinking was to take people interested in the arts profession and give them exposure and income—to show them that teaching doesn’t have to be on an elementary level. It can be any age,” Mada explains of the initiative.

LOCA’s leadership works tirelessly to develop fresh programming for the organization’s ever-evolving roster. Mada even adds that the organization is currently exploring opportunities for corporate partnerships that would allow companies to send employees to LOCA workshops as a creative outlet.

“We are … in a growth spurt right now,” she adds. “I don’t see LOCA wrapping up anytime soon. We are here to stay.” 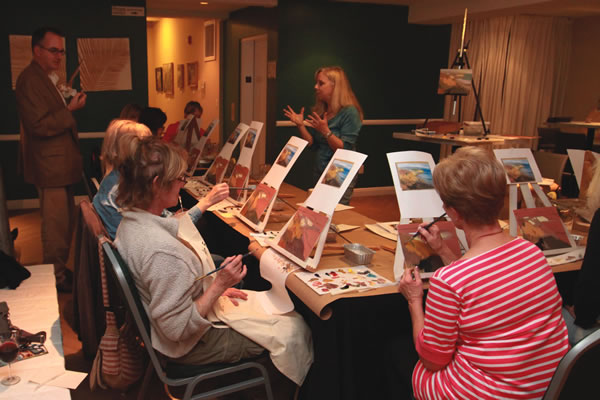 Over the years, LOCA has sought to integrate itself into the Laguna landscape through a variety of relationships with nearby nonprofits and independently operated businesses. Through these local alliances, the once-humble organization has made its presence widely known across the community.

One of these definitive relationships is with the Susi Q Senior Center, where LOCA presents its regular Senior Art Escapes. In partnership with the center, LOCA organizes professionally taught workshops for participants ages 55 and older. Many of the pieces created during the workshops are later exhibited and sold in the center’s on-site Gallery Q space. “The classes are almost always filled and often with a waiting list,” says Carole Zavala, arts manager for the Susi Q Senior Center. “It has provided seniors with opportunities to explore new mediums—printmaking, jewelry, mask making—in addition to traditional courses.

“I love working with LOCA, and their offers have broadened creative opportunities for our 55 and over population in town,” she adds.

Another of LOCA’s primary connections is to the Pacific Marine Mammal Center (PMMC). Through its Art & Sea Experience, LOCA provides participants with the opportunity to observe sea lions and seals that are being rehabilitated at the PMMC. After a tour of the center, students enjoy a guided art class during which they recreate the PMMC’s resident marine mammals. The singular experiences are offered six times each year on various Saturdays and typically serve 12 to 18 participants per class. PMMC board member and volunteer Mary Ferguson acts as a docent, giving tours and discussing the animals before students head upstairs for an art lesson, which can range from drawing to sculpting to making masks.

Mary firmly believes that LOCA’s influence across Laguna is integral to the community’s vibrancy. “LOCA fulfills a large desire amongst the Laguna Beach community to further arts education,” she says. “Laguna Beach schools do a good job, but can only do so much. LOCA steps in to provide an even richer experience and a broad offering of classes for all ages.”

In addition, LOCA presents workshops that explore Laguna’s distinctive flora. Botanical classes held at the Laguna Nursery include the participation of nursery owner, horticulturalist and landscape designer Ruben Flores, who gives presentations prior to the classes. “I love Ruben and the information he provides,” participant Lavonne Smith says of the outdoor sessions. “What he says, his enthusiasm and demonstrations always relate to class.”

LOCA continues to flourish through fundraising efforts and grants from the city of Laguna, the Laguna Beach Festival of Arts Foundation, the Laguna Beach Community Foundation and many others. Additional support comes from LOCA subscribers and members, as well as proceeds collected from sales of items featured in the organization’s online boutique. The nonprofit recently debuted LOCA critters, 3-D cutouts of animals like fish and rabbits created by local artists that were made available for purchase on LOCA’s website beginning in October. “We try to be creative with fundraising since there is so much competition,” Sue explains.

Through its myriad workshops and community collaborations, LOCA offers students and teachers across Southern California the opportunity to unlock their intrinsic creativity. “For local residents, there’s no excuse for anyone in town not to have dabbled in art,” LOCA instructor Carolyn adds. “I learn from my students, too. I’m always learning, like [in] life—how can you know it all?” LBM