Miki Izumisawa literally built, by hand, the sushi bar she works behind. She starts work at 242 Cafe Fusion Sushi each day by tying a cloth band around her head and taking inventory of the fresh fish at the restaurant. “[Miki] is the plumber; she’s the electrician; she’s everything,” says sous chef Susan Yoon. “She’s better than any male chef.”

Ask Miki about her background and she’s quietly understated. She’d rather tell you the story behind each impeccably crafted dish than discuss her time working under sushi master Nobu Matsuhisa, or boast of being a part of an exclusive community of female sushi chefs.

“Every dish has a story,” Miki says. As an artist (she created all of the artworks that adorn the restaurant), her sushi dishes each carry meaning. The restaurant doesn’t adhere to all the rules of traditional sushi etiquette, but there is a sign at the end of the bar illustrating a stipulation—do not ask for soy sauce. In the menu, you’ll also see that there is to be no customization.

Although Miki grew up in Japan, she creates fusion dishes, incorporating inspiration from everything from Disney princesses to the environment. “Anyone can make traditional sushi,” she says. “I want to do what I want to do. For traditional, you can go to another chef.”

The menu is filled with bright photos of food, many times adjacent to a picture of what inspired it. The Orange Sand Beach, a roll of spicy marinated pepper salmon with soy vinegar sauce, sits next to an idyllic picture of a beach. The Snow White roll, made with a selection of fish and mango paste, serrano chili, scallions, plum paste and Parmesan, draws colors from the eponymous fairytale. One favorite is the Laguna Canyon roll, Miki’s take on a rainbow roll, inspired by history: She sears the fish with a blowtorch, symbolizing the 1993 canyon fire, then sprinkles salad atop the roll, because “after the rain, the plants grow again.”

Other highlights include the Integrated P With G, Moss Pink, Give You Energy and famous Sexy Handroll, a beautifully concocted hand roll of spicy tuna, scallops, “secret crunchies” and Miki’s secret sauce.

There is one Japanese tradition 242 brings to Laguna: the restaurant’s Omakase—or chef’s selection—menu, which starts with soup before moving into four chef’s choice plates.

So what’s next for the chef? “I’m thinking of a cake,” Miki says. She looks into the distance, and adds with a smile, “A sushi cake—it would have rice, decorated with fish.” LBM

Tip: The restaurant is small, seating no more than 20 people, so arrive early to avoid a long wait. Also, take advantage of 242’s extensive sake menu. 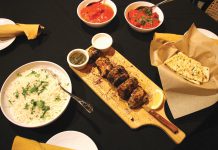 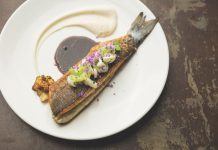