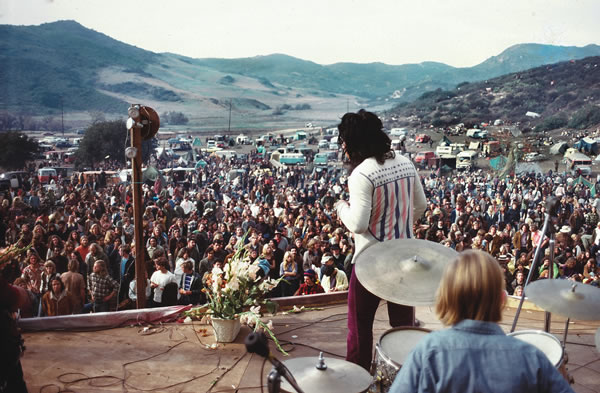 The weather was cold and crisp in Laguna canyon, but the vibes were toasty at the 1970 Christmas Happening, a one-time event by and for 25,000 flower children.

By Dana Nichols  | Photos by Mark Chamberlain, BC Space

Forty-two years ago, holiday season 1970, a 50-foot lumber-and-nails stage went up in Laguna canyon as people got word that a big happening—The Great Happening—The Christmas Happening—was to occur. Long-haired hippies came from far and wide, having glimpsed posters of a green angel and red hand-lettering that beckoned, “Be a witness to the birth of the ‘New Age.’ All wise beings who perceive the inner light shining brightly on this village are requested to bring their presence to celestial music cosmic light show, Laguna Beach, California, spiritual center of the world. A coming together to celebrate the birth of the one feeling in all. Dec. 25, 1970.”
The Christmas Happening continued until Dec. 27 in the grassy bowl-shaped Sycamore Flats near the El Toro Road intersection. Conceived as an entirely free music festival with inspirational and spiritual speakers, the event ended up being so good in some ways, and so bad in others, that it was as though the tune of the hippie era had played its last resounding notes to Laguna Beach and anyone else who might be listening.“I remember wandering around the whole area and seeing these long-haired guys, wives, children and the music in this absolutely idyllic setting, climbing up the sycamore trees and looking at free music,” artist-photographer Mark Chamberlain says. “People were giving things away: drinks, joints, food. It was really a magical experience.” Mark, a Midwest transplant, had observed the event with a camera on his arm.

Eiler Larsen, the Laguna Beach greeter, kicked off the concert under the stage’s large cross with a “Merry Christmas everyone!” Peaceniks, runaways and free-lovers boogied to local musicians covering songs of the day, eating vegetarian food donated by neighborly churches and camping overnight. 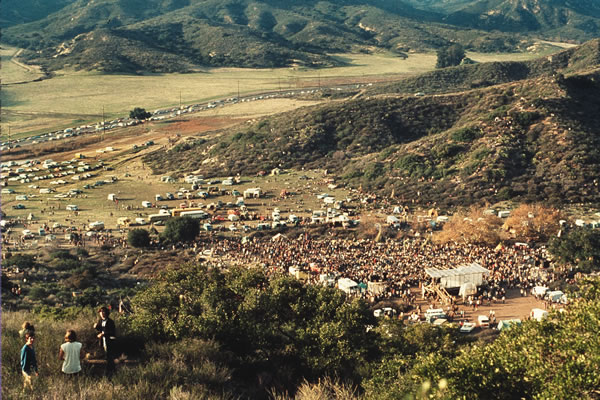 Peace, Love and Not Much to Eat

“The youth subculture in the United States has found an untraditional way to observe this Christmas weekend. It’s another rock festival—but—unlike previous such events, it seems to have happened almost all by itself, with little apparent organization.” —CBS News, December 1970

Today, 42 years after the Christmas Happening, decades of development on the 1200 block of South Coast Highway are a contrast to what’s inside Sound Spectrum record store, which was erected in 1967 and still looks like the original establishment. Young Janis and star spangled Hendrix posters hang over the well-worn terra cotta floor where piles of vinyl lean against wooden racks filled with more records. If a place for romanticizing the 1960s exists, it’s here.

“I hear a lot of young people saying they wish they lived in the ’60s,” long-time employee Wave Baker says. “We still had a lot of difficulties then. I don’t know what they think it was like.”

If those young people imagine the Christmas Happening as a peace-promoting love-in, the scent of sandalwood incense drifting over a warm sea of sunny hills where free drugs fall from the sky, they are only slightly right. Dirt, nudity, shivering nights, frostbite, traffic jams, long walks, insufficient sanitation, garbage pits, makeshift drum fire pits and at least one snake bite were very real. 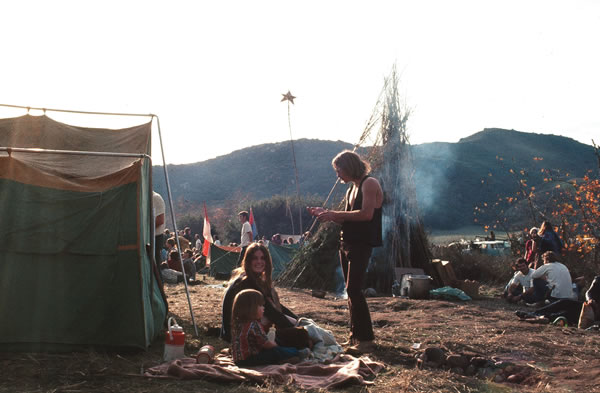 “It was just … a bunch of hippies saying, ‘Well man, we’ll have positive vibrations about it and it’ll happen,’ ” Jim Otto, owner of Sound Spectrum, says. “It wasn’t professionally approached, let’s put it that way.” Jim had gone to the event and describes it as chaotic. “There were so many great concerts going on in those days with good sound and good lighting, and this was kind of the opposite of that.”

On the first day of the event, it became apparent that high-profile musicians like Bob Dylan and Jefferson Airplane, who were said to be playing, weren’t ever going to show up. By one account, the Grateful Dead were close by but thwarted by the fact that canyon traffic was shut off as of 3 p.m. on Christmas Day. Simultaneously, food supplies were running out. According to one report, 300 bad drug trips were treated at the small medic tent.

In the Christmas Happening’s signature hoorah, a single-engine plane with its numbers covered swooped over Sycamore Flats as thousands of Christmas cards fluttered out the side door and over the crowd. Inside each was a dose of Orange Sunshine, the LSD brand of the Brotherhood of Eternal Love, which was then operating the nation’s largest narcotics network out of Laguna Beach.

“The fact that folks in the Brotherhood were able to perform the only documented psychedelic airdrop at the concert is more than impressive—and weird—enough to mitigate against all the other failures of the event,” says Nicholas Schou, author of “Orange Sunshine: The Brotherhood of Eternal Love and its Quest to Spread Peace, Love and Acid to the World.” While the event is historically significant, some participants viewed it as a failure “because they took so seriously the notion of trying to change the world.” Nevertheless, plenty of attendees enjoyed themselves: Police had to force at least 1,500 people out of the canyon early on the morning of Dec. 28.

Optimism Up for Grabs 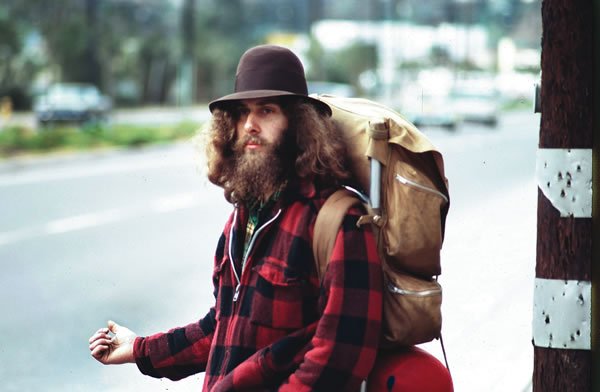 “LAGUNA SEALED OFF AS ROCK FANS GATHER: 10,000 at festival; sponsors say it could last for a week.” —Los Angeles Times, December 1970

When the Christmas Happening came together, Ronald Reagan was the governor of California, Altamont had taken place the previous December and the Summer of Love was a recent impression. The Kent State shootings had occurred just eight months before. Sympathizers of Timothy Leary were still celebrating the psychedelic revolutionary’s escape from prison in September, but in Laguna Beach, with Brotherhood leader John Griggs deceased, the Brotherhood of Eternal Love headquarters Mystic Arts World mysteriously burned, police raiding more drug operations and local residents growing weary of all the hippies in town, the scene was becoming more volatile and less utopian. One local member of the counterculture, Curtis Rainbow, aka Curtis Reed, was a sage of vegetarianism and full of youthful energy.

In William Kirkley’s yet-to-be-released documentary, “Orange Sunshine,” artist Dion Wright explains how the event took shape: “[Curtis] came up to me on the street wild-eyed … [saying] ‘Look at this, Look at this!’ He had this flyer that Bill Ogden had made; it was encouraging people to come and have a riot on Main Beach, basically. I said, ‘You can’t do this. You’re gonna wind up getting everybody in jail. Let’s change the perspective so it’s more religious, so it’s got a spiritual overtone. It’s gonna be Christmastime.’ So I made up this poster. And he took this poster and had thousands of them made and sent it all over the country.”

What happened in the canyon reflected what was going on in the country at the time. “People were trying to find a way to exist within that time period, to express their opinions and still keep their humanity,” Mark says. On Dec. 28, he witnessed police, armed with batons and SWAT gear, moving down the road. “My head had just been spun around by all this other activity and all these other cataclysmic events, and now I’m looking at the place that I’ve chosen to make my home, and here it is.” 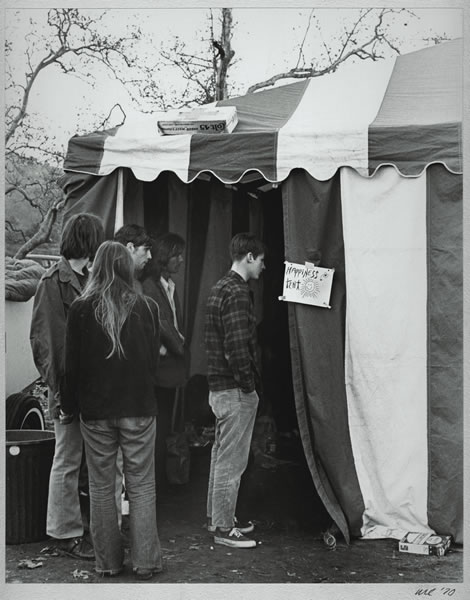 Laguna Beach officer Neil Purcell, who would later become chief of police, first saw a poster for the Christmas Happening on Dec. 11 and was told it would be the West Coast Woodstock. He was among the officers who helped peacefully confiscate drugs at the door during the first two days. By day three, it was time for everyone to go home, according to authorities.

“As the sun came up … we had surrounded in a horseshoe form, all 450 of us … Captain Brown gave the signal and down we came,” Neil says in the “Orange Sunshine” documentary. By 10 a.m., any Happening attendees who weren’t locals were on buses headed toward the 405 Freeway.

Belongings were burned or buried by bulldozers to forever rot away under hard-packed dirt.

The vibe had changed. Hippies returned to life in Laguna Beach but kept lower profiles. It was a rude awakening, says Mark, who remembers a crackdown on drifters after the Happening.

“It’s part of the collective memory now, that there were good and bad aspects to the Christmas Happening on both sides,” Mark says. “Initially the police were directing traffic, and then they turned. And initially the partiers were peace and love, and then they had some downers. … The greatest unpleasantry was the police and the city and county and state authorities overreacting, in my estimation, and just forcibly shutting it down. But it did happen without anyone getting killed.”

“The people that thought those hippies were trouble said, ‘Yep, see. They closed the canyon. That was trouble,’ ” Jim says. “If you said, ‘Oh, the man puts us down,’ [it was] ‘Jimi Hendrix would’ve been there if it hadn’t been for the man.’ ”

The likelihood of The Happening ever happening again, with its free entry, haphazard organization and canyon roadblocks, not to mention uninhibited free love and free drugs, is slim to none. It’s an event to remembered as one of the last revels of a colorful era, a time gone by in Laguna Beach.