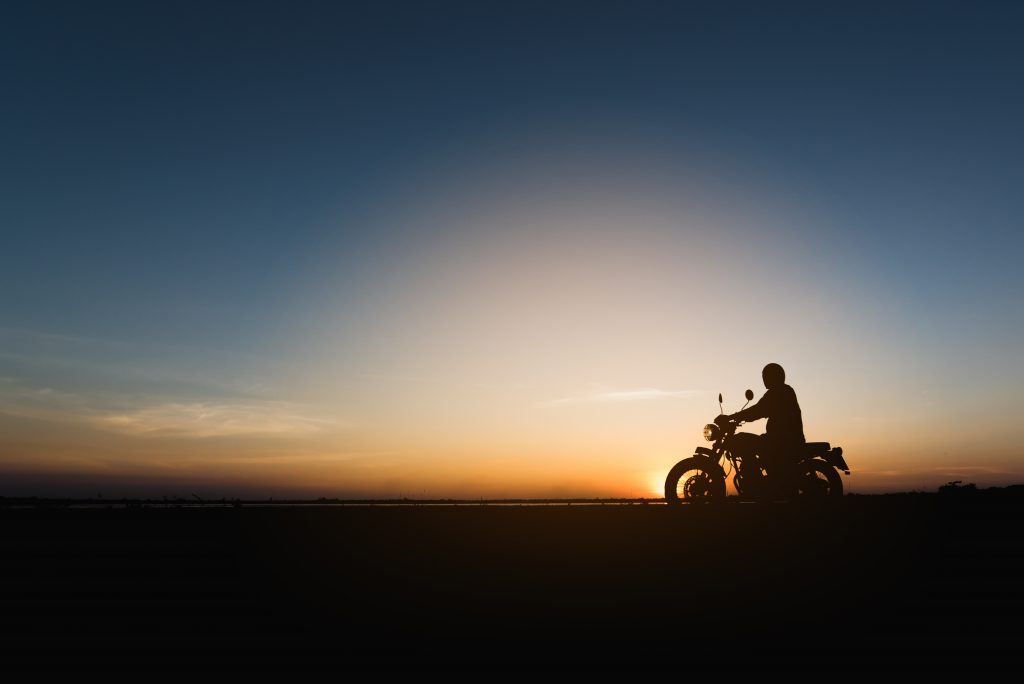 Any motorcycle enthusiast will tell you—riding a motorcycle is a thrilling experience. Handling a bike involves physical skill, balance and calculation of speed, but riders also realize a sort of calm when they ride, the freedom of the open road ahead and power of the bike underneath them. Camaraderie and adventure are also part of the experience.

The “King of Cool,” actor Steve McQueen once said, “Every time I start thinking the world is all bad, then I start seeing people out there having a good time on motorcycles. It makes me take another look.”

Evel Knievel and Hunter S. Thompson shared McQueen’s passion for motorcycles, as do the owners of the more than 8 million bikes registered in the United States. Some people were just born to ride.

Here, three local motorcyclists—Darren Kaiseratt, Neil Verni and Neal Winvick—share their stories about why they ride and where the road takes them.

“I like riding through the desert. It’s easy to unwind and enjoy the scenery,” Winvick says. “A perfect day is a ride on Highway 62 past Joshua Tree to 29 Palms and on to Amboy [on] Route 66. Highway 39 in the San Gabriel Mountains is always beautiful and challenging. Big Bear has some of the best dirt bike trail riding in the area.”

All three riders agree that there are many local events in which motorcyclists can participate, including Trabuco Canyon’s Born-Free Motorcycle Show; The Distinguished Gentleman’s Ride, which involves riders in more than 90 countries; and the four-day El Diablo Run from Temecula, Calif., to San Felipe, Baja California, Mexico.

“We are very lucky here in Southern California to have so many fun events close by,” Kaiseratt says. “I’ve rode all around the country, from overnight cross-country adventures to a quick ride to Hell’s Kitchen [Motorsports Bar & Grill in Lake Elsinore] for a bite to eat. The itch keeps me searching the map for the next destination.”

Aside from where they go, each rider also has their own, individual story about why they ride.

Eight years ago, Darren Kaiseratt, owner and operator of Kaiserbuilt Motorcycles, first drove through Laguna Canyon while on a road trip from Colorado. He told his friends, “I’m going to move here someday,” and when he did, he opened his motorcycle shop.

A relatively new Laguna Beach business owner, Kaiseratt takes pride in his shop and says it’s “not your everyday dirty, old motorcycle shop.” On the back of every business card, his slogan reads: Good, Honest, Work.

“I build [and] work more in the style of a doctor’s office, by appointment and with proper attention,” he says. “[At] the end of the day, there are dozens of motorcycle shops in Southern California. But I believe I am the best, superior in attention to detail and always [have a] positive connection with every client, large or small.”

Kaiseratt says he’s worked with engines since he was 7 years old and has been “professionally tinkering” since graduating in 2007 from the Motorcycle Mechanics Institute in Phoenix. As a teenager, he became involved in racing and freestyle, off-road, all-terrain vehicles. He’d applied to work at the local dealership, but was declined because he was only 15 and had no real field education. However, by 10th grade he was accepted to the Motorcycle Mechanics Institute.

Over the years, he has served as a personal mechanic for NASCAR legend Wally Dallenbach Jr., maintained and repaired snowmobiles for X Games athletes and built $80,000 custom choppers from the frame up.

“I’ve always loved the mechanical art, motorcycle style and culture. They can be a tad more dangerous than the magenta … Prius driving down road with the left signal light still flashing,” he says. “I have a heavy passion to be connected to the elements, to feel the temperature drop when you hit the dip in the road by Aliso Beach Creek. To feel the direction of the sun … while a cute, smiling girl on the back has her arms holding on tight.”

Laguna Beach resident and art dealer Neil Verni also began his love affair with motorcycles at age 7 when his father bought him a Yamaha Big Wheel 80 cc dirt bike, which he still owns. He says his favorite bikes to ride are what the situation calls for, from dirt bikes to Italian sport bikes to V-twin touring bikes.

“Getting my own motorcycle at that young age was the single most mind-blowing experience. [I] pretty much got hooked after that,” Verni says. “Currently, my garage has a Harley-Davidson Dyna, a Harley-Davidson Sportster and a Suzuki Savage, which I eventually plan on turning into a bobber.” (A bobber refers to a motorcycle with all extraneous body parts removed, like the front fender, plus a shortened rear fender, to reduce weight.)

Verni is also adding a 1973 Honda Scrambler to his collection. He says his mother has been holding onto it since she was in college, but has reluctantly agreed to eventually send it across the country to him.

“From about April to October, I love riding up … [Highway] 101 towards Santa Cruz. The journey really starts coming to life around Malibu and [the] landscape continues to raise the bar every hundred miles or so going into Santa Barbara [and] San Luis Obispo until the coastline unfolds into the most gorgeous stretch of road on the West Coast up through Big Sur and into Monterey Bay,” Verni says. “However, the fall and winter provide plenty of reasons to rip out to the high desert and do a little motorcycle camping out in Joshua Tree.”

The operator of a family-owned restaurant in Dana Point, and also a Laguna Beach resident, Neal Winvick says he got into motorcycling in high school by riding small dirt bikes. He bought his first “real motorcycle,” a used 1955 Harley-Davidson KHK, when he was 19.

“It was unique in that it … [was] a flathead and no one else I knew had one. It was and still is pretty rare,” Winvick says of this type of bike with side-valve engine.

Now, he says his K Model is his favorite bike because it has a lot of good memories associated with it—he’s met some of his oldest and best friends through motorcycling and it started with this bike.

“After many years of having the bike disassembled, I decided to put it back on the road,” Winvick explains. “After having the motor and trans gone through, I had the frame powder-coated, gas tank and fenders repainted, the hubs relaced to the rims, had new fork tubes made to replace the old ones and had all of the chrome redone.”

His first attempt at a complete rebuild, Winvick spent a lot of time hunting down missing and obsolete parts, and outsourcing some of the machine work. He enlisted Kaiseratt’s services to finish the project.

“I literally gave Darren a rolling frame, engine and a large tub full of parts,” Winvick says. “Darren took on the task of doing all of the final assembly including the forks, wiring, charging system, fabricating and troubleshooting. I learned a lot in the process. It took several years from start to finish.”