Artist Mia Tavonatti’s Power of Words project aims to inspire and bring together the community around words and art. – By Daniella Walsh 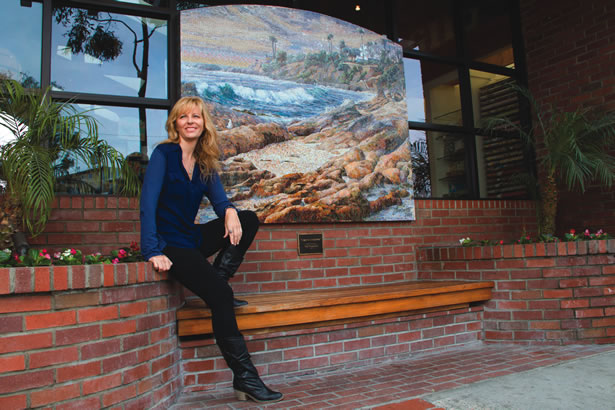 Thoughts become words, words become actions, and actions become seeds that grow communities. These are concepts to live by for painter, muralist, glass mosaic artist and teacher Mia Tavonatti, who has launched The Power of Words Project in Laguna Beach, in a mission to uplift communities through art.

“I have used one-word mantras throughout my life, and I know they work,” Mia says. “For the last years I used ‘abbudance’ with two b’s. It’s my way of making the word more powerful. After my divorce, I concentrated on ‘fearless,’ and in due time everything that had held me back disappeared,” she says. She has also used non-English words like “Svelata,” meaning unveiled in Italian, but also referencing the tearing down illusions of life. Then again, Mia means illusion of life, the existence of the unseen, she says. 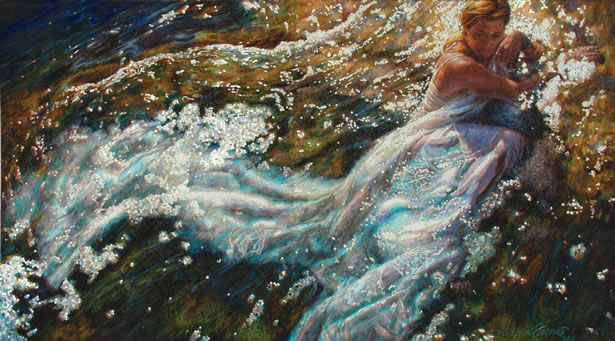 Artful Start in a Colorful Town

Although Mia maintains a studio in a contemporary loft complex in Santa Ana, she has a taproot connecting her to Laguna Beach, where she teaches painting and mural production at Laguna College of Art & Design (LCAD). The administration building prominently displays a mural done by Mia and her students, and she has also pieced together mosaic glass murals for Mozambique and Laguna Drugs.

“Mia is a spectacular talent who thinks outside common boundaries. Her art is a gift to Laguna Beach,” says Pat Kollenda, treasurer of the Laguna Beach Art Commission.

To fully understand her newest concept, it’s best to scroll back to March 2011, when the largest mural in Orange County, executed by LCAD students under her supervision, disappeared under a coat of battleship gray paint.

Located on the side of the Laguna Canyon Winery building on 2133 Laguna Canyon Rd., it was a colorful tribute to the canyon’s bucolic vibe, and was filled with images of flora and fauna.   Yearning for something more wine-related, winery co-proprietor Marlowe J. Huber had it painted over in defiance of ordinances protecting public art, hoping to replace it with prominent signage advertising his business. 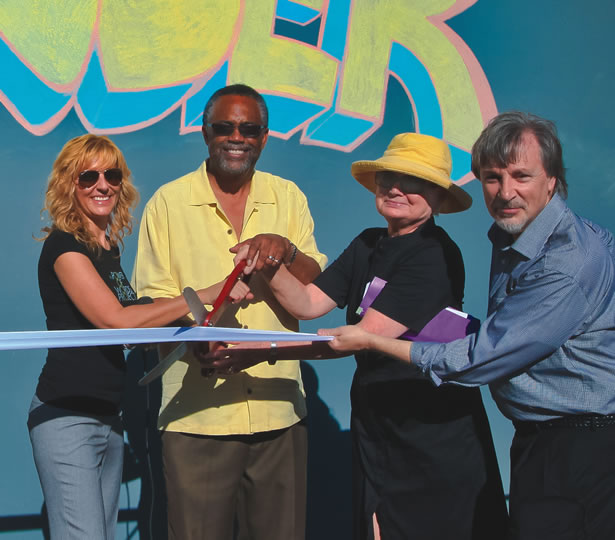 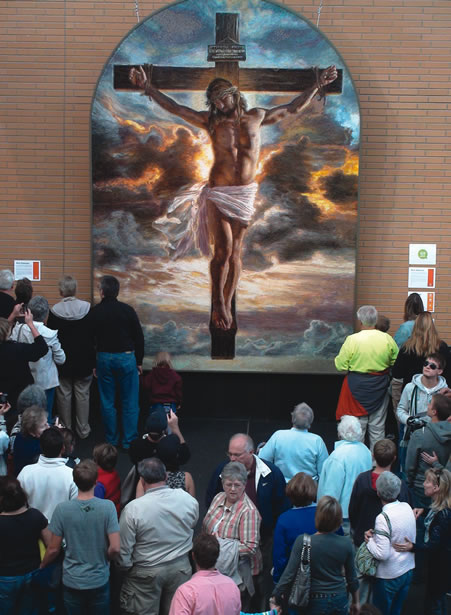 Community backlash motivated LCAD, the winery and Steve Henry, owner of the building, to commission a new mural, which is where Mia and her words project come in.

The design of the new mural is based on the students’ interpretation of a word chosen by Laguna Beach residents as part of The Power of  Words Project. The final stylistic execution, composition, images and possibly added supporting narrative content will be determined by the students’ collective choice and a panel of invited Laguna community members, and will receive final approval by the Laguna Beach Art Commission.

“The students have to go through the entire application, presentation and approval process like professional artists,” Mia says. In addition, she is hoping that LCAD alumni previously enrolled in mural classes will come forward and participate. “Ideally, I would like to reach people who have worked on the original mural and invite them to participate in the execution of its replacement,” she explains.

Wonder had been elected from roughly 1,100 words voted on by eager participants. It beat out words like love, diversity, vitality, creativity and even “je t’aime” and levitation. “Wonder is so appropriate for Laguna; it captures us,” Jane says.

The 10 students, in the know a bit earlier than the attending public, were already busy thinking about their individual designs. Mia estimates two semesters for completion of the mural.

Beginning locally, Mia plans to take the mission she named The Power of Words Project across the nation, establishing mentoring networks in local communities that will link visiting artists with local ones, schools, students and youth organizations. “The project is designed to uplift places through art, language and community involvement, especially now when so many people need uplifting,” she says.

The idea had been germinating for roughly three years when the replacement of the canyon mural and an infusion of $350,000 in cash brought it close to reality. Mia won the money via the prestigious ArtPrize, a yearly people’s choice competition held in Grand Rapids, Mich., twice in a row.  In 2010, Mia took second place for a brilliant glass mosaic titled “Svelata” and, invited back in 2011, won first place for a stained glass mosaic altar piece depicting the crucifixion of Jesus. And yet, that spectacular recognition was tainted by sorrow.

“The day they informed me that I had won, I also got word that my mother had just died,” Mia says.

Taking 2,500 hours to complete, the stained glass piece that won the prize had originally been commissioned for St. Kilian, a Catholic parish in Mission Viejo with plans for construction of a new church. When construction was delayed, Mia decided to enter the 9-by-13-foot mosaic masterpiece into the contest and trucked it across the country to Grand Rapids, Mich.

“Now I owe them another altar piece,” she says. The original, now owned by ArtPrize, may be loaned indefinitely to the Vatican.

“The composition is quite spectacular. It is contemporary with a classical technique. With her mastery of light, she brings across the idea that Christ is the light of the world,” says Father Bruce Patterson who had, roughly two years ago, commissioned her to create an altar piece for St. Bonaventure Church in Huntington Beach, setting her on a creative journey exploring religious art.

Disinterested in using the prize money for pure personal gain, she earmarked it toward the establishment of the Svelata Foundation (svelata.org), which in turn will fund the Power of Words Project and also establish scholarships for high school and college-level art students. “I’ve been wanting to do this for a long time. The foundation will donate primarily labor to the project, but we will also have to raise funds to keep it going,” she explains.

Laguna Beach artist and Svelata treasurer and board member Laura Wolf describes herself as Mia’s first staff member. “In this economy, The Power of Words is the one project that we are confident can move successfully forward. With Mia’s prize money, we can help move art into an accessible place for people. When [LCAD] contacted us about doing another mural, we knew this was the time to launch; it’s amazing what arrangements life makes sometimes,” Laura says. 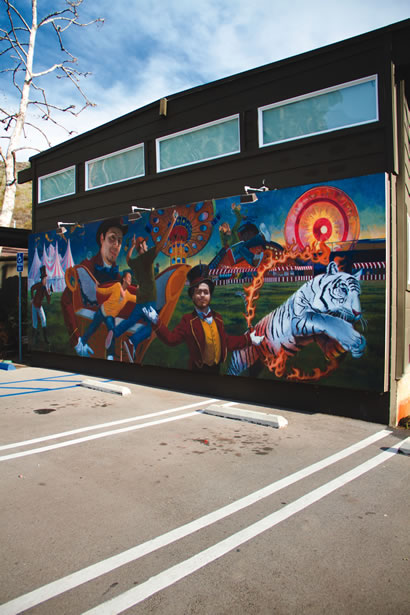 Mia grew up in Iron Mountain, Mich. Her father, Ted, was an art teacher and owned five art supply stores, and the whole family was involved with art (her sister Paris was a jewelry maker, and her sister Tara teaches art at Fullerton College). A natural “jock” growing up, Mia excelled at basketball but aspired to studying art, even when a high school counselor advised that she would be more successful studying French. “I took French and it came in handy later,” she recalls.

Intent on art school and preferably in a warmer climate, she asked a counselor to recommend the top five art schools in California. Once here, she discovered that he had given her an alphabetical list. Said list began with the Art Institute of California in San Francisco, but instead of enrolling full time, she worked in the city, experienced her first big earthquake and made a living drafting for a structural engineering firm.

Mia wound up earning her bachelor’s degree and then her MFA majoring in illustration at California  State University, Long Beach. Enamored with Renaissance art, she ventured to Europe and enrolled in art courses at several Paris venues as well classes in Italy and Greece under a Cal State study abroad program.

Now 47, she travels with an extensive resumé that includes commissions as a civilian Air Force artist. The job required her to document Air Force training missions, including the 550th Search and Rescue squad in Albuquerque, as well as five days at Randolph AFB in Texas, where she trained for her first ride in a T38 supersonic jet trainer, which is something she describes as the experience of a lifetime. Her resulting art has been shown at the Pentagon and the National Airspace Museum. In a tamer realm, she authored art instructional books and a children’s book titled “Cramped Quarters.”

Before winning second place in the 2010 ArtPrize contest, she showed the “Svelata” series of monumental-sized paintings at the Museo Arsenale in Amalfi, Italy in 2007, and a year later she won Best of Show for her paintings shown in Acquasparta, Italy. The exhibition was a group show of 20 international artists, and her award was based on a popular vote by viewers solicited by the show’s organizers, the Camaver Kunsthaus, a firm specializing in curating and placing art exhibitions into historical palaces throughout Europe.

Now, she plans to produce the first “Svelata” traveling show of 22 paintings for a world tour. Her concept involves housing the works in a movable structure independent of existing museums, galleries or palazzos.

The paintings embody a strong spiritual theme. Several show a handsome couple immersed in luminous pools of water, which ebb and flow in shapes suggesting clouds or wings or independent, celestially inspired movement. Closer examination reveals the woman as a self-portrait, inviting ruminations on spiritual emergence as symbolized by water. The man is someone who, she explains, was once close but now symbolizes an absence of true endings, a continuance in the spiritual/sensual realm.

Mia’s newest project reveals her commitment, her resources and the energy of her students to shape communities for the better. Former LCAD student Nadia Jaime assisted Mia on the crucifixion project and stands ready to delve into The Power of Words Project.

“Mia has been a mentor and a guide to connect my own inspiration to her vision,” Jaime explains. “When we worked on the crucifixion project, we all knew that this was something bigger than all of us. Now I am looking forward again to us working side by side.”

Perhaps Robin Fuld, LCAD’s career counselor, puts the lingering benefits of creating The Power of Words Project, or for that matter, any of Mia’s work best: “Mia shows students how creating a mural involves everything anyone needs to succeed anywhere, at anything—that includes creative thinking, a sense of history and continuance, teamwork, practical know how and a passion for reaching out to a community.”  LBM