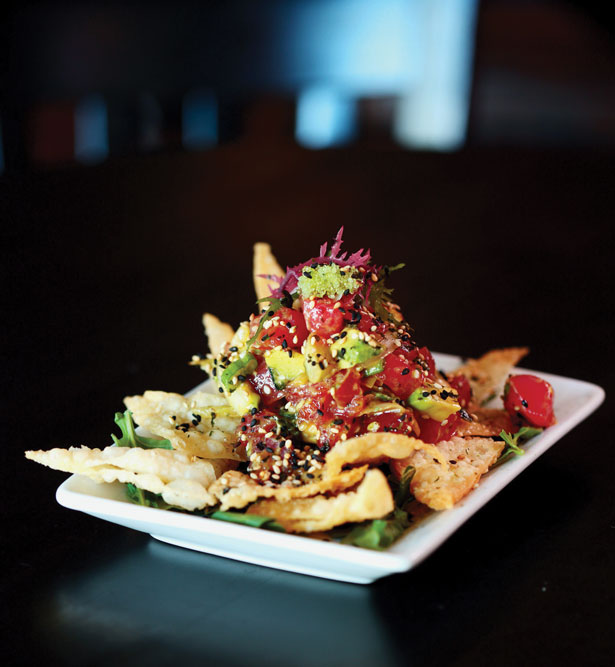 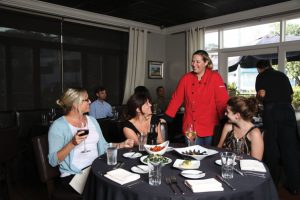 Food trends start out innocently enough. Usually a trend involves a chef coming up with a novel or rediscovered approach to an ingredient or culinary concept. Word starts to spread to other kitchens in the restaurant world, leading to other talented culinary minds producing their own interpretation of the original idea. Within a short while, the trend is everywhere, as inescapable as a shaker of salt on a chain restaurant’s table, and stays that way until a newer, fresher trend swoops in to take its place. And as a good food trend goes through this journey, it will be responsible for some of the food world’s most compelling gastronomic experiences and memories.

So what are the hot culinary trends seen right here in Laguna Beach these days? Some of them shouldn’t be too surprising given the relation between food and health, while others could be looked at as downright shocking due to the town’s reputation for possessing conservative palates. But all of them do showcase a certain level of fun, intrigue and enough power to morph into something more than just a flashy fad.

Gluten-free is not a trend as much as it is a way of life for those who are either wanting or needing to cut wheat from their diet. However, when the notion of gluten-free options first hit the scene, the resulting dishes were nearly treated like an afterthought. Thankfully, this is no longer the case. Several chefs throughout Laguna Beach have studiously applied their scientific command of ingredients and flavor composition to create gluten-free dishes that are just as complex, flavorful and intriguing as their wheat-laden counterparts. This skill is especially highlighted by dishes that seemed impossible to be made sans-wheat a few years ago, such as the gluten-free pizzas at Pizza Lounge, the gluten-free pasta options at Ti Amo or the gluten-free pancakes that Splashes serves up for breakfast each morning at Surf & Sand Resort. And as more chefs master the art of creating gluten-free dishes, the trend is poised to flourish even further. “I don’t see the gluten-free trend disappearing any time soon,” says Jeff Armstrong, executive chef at Splashes. “In fact, I think it may even grow in popularity and start infiltrating menus much like vegetarian and vegan options.” 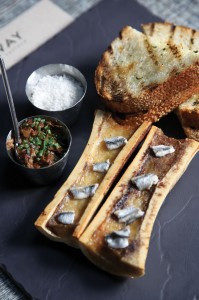 Not too long ago, items such as tripe, sweetbreads and bone marrow were ingredients that were deemed too weird, funky or scary for the Laguna Beach dining scene. However, a new generation of chefs has managed to bring customers around to trying certain parts of an animal that had traditionally been chucked in the trash. And as much as the kitchen talent deserves credit for this paradigm shift, a healthy portion of this trend lies with the progressive palates of the diners themselves. “I think people have gained more interest in different foods such as offal because they are being exposed to it more than ever before,” explains Amar Santana, executive chef and owner of Broadway by Amar Santana. “Thanks to the many different cooking shows on TV, people have been encouraged to be more experimental when it comes to trying different foods.” The sumptuous offal that peppers Amar’s envelope-pushing cuisine provides plenty of chances for his customer base to be adventurous, and other chefs around town have been known to sneak a dish or two touting unusual fare onto their menus, including Casey Overton from The Loft at Montage Laguna Beach. At Stonehill Tavern at The St. Regis Monarch Beach, the chefs feature botarga, roe  pouch of tuna or grey mullet (or sometimes swordfish), which is dried and cured in sea salt for a few weeks.

With so much information readily available at our fingertips, the world has seemingly become a much smaller place. One of the major ways this form of global shrinkage has manifested itself is through the magic power of food; as we become more educated about what surrounds us, we become more likely to try culinary items that may have previously resided out of our comfort zones. So it stands to reason that spices culled from places such as Egypt, Morocco and Malaysia have begun to play a larger role in the Laguna Beach culinary scene. And much like reading the newspaper or watching CNN allows us to keep our fingers on the pulse of current events, tasting exotic spices enables us to pick up and discern culinary trends around the world. “We like to utilize different exotic spices because it helps to bring a lot of what’s going on in the world to the city,” says Azmin Ghahreman, owner and executive chef at Sapphire Laguna. “Plus, one of the most fun, exciting things about working with spices from other parts of the world is that there is always something new to try whenever a region gets discovered internationally.” In addition to Sapphire, venues such as the Mediterranean-themed Zéytoon Café and African-inspired Mozambique use global spices to provide Laguna Beach residents the intriguing opportunity to get to know the world better, one bite at a time.

We’re all familiar with the traditional way ahi tuna is served: sashimi-style, slightly seared and encrusted with a seasoning of some sort. But what happens when you move the fish beyond the realm of the rectangle? It is a question that more and more Laguna Beach chefs are answering by building different dishes that showcase the fish’s adaptability, much to the eager delight of their patrons. “I think people have definitely gravitated to wanting to explore the versatility of ahi because ahi is such a neutral fish,” explains Michael Ingino, executive chef at The Deck on Laguna Beach. “You can pair the fish up with any kind of flavors, and it will work beautifully.” These days, ahi’s range is being stretched in all kinds of intriguing ways throughout the city, from the elegantly sculpted ahi and crab stack served with mango coulis and wasabi aioli at The Deck to more casual indulgences such as the ahi fish tacos found at Tommy Bahama Bar & Grill or the Hawaiian ahi poke offered at K’ya Bistro Bar and its sister restaurant, House of Big Fish & Ice Cold Beer. 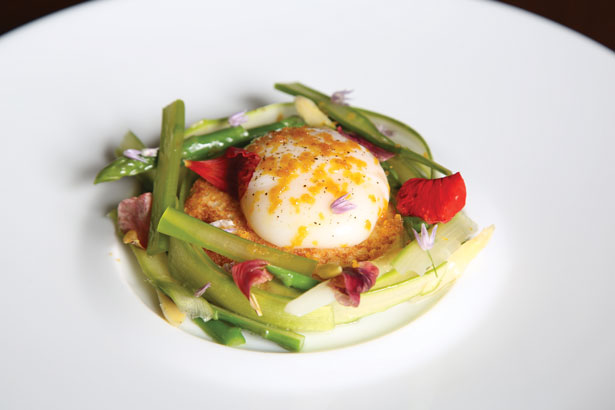 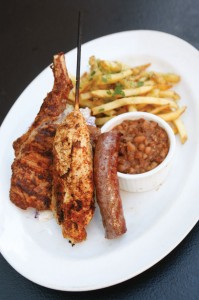 We all know that Sunday is traditionally the day of rest. Yet it is also traditionally the day where families, friends and whole communities can band together over a delicious dinner not only to enjoy each other’s company, but to also make sure everyone is doing OK. It is because of this latter element that some of Laguna Beach’s most popular restaurants forgo the day’s intended respite to make an abundance of yummy grub. “Laguna Beach is a really tight knit community, so essentially the Sunday supper trend is very reflective of this area—bringing friends and family to the table,” explains Ryan Adams, executive chef at Three Seventy Common Kitchen + Drink. “If you visit us on any given Sunday, you’ll notice the community scene in the restaurant—it is such that guests will congregate at each other’s tables to chat with other guests throughout the evening, as they all tend to know each other.” While Ryan’s restaurant provides the conduit for communal bonding in the form of a multi-course feast that changes from week to week, other venues use the Sunday dinner time period to reach out to the area in different ways. Nirvana Grille donates 10 percent of every pre-tax food bill generated on Sundays to the community organization of the diner’s choosing.

Even when the heat fades from these trends, it is hard to imagine that any of them will just vanish. After all, each trend is tied to a culinary experience that is too important, intriguing or tasty to go away completely. Instead, they will merely be shifted into normal, permanent fixtures on a menu near you, with intense focus redirected to whatever white-hot gastronomic fad may crop up to replace the old one’s buzz. And who knows: There is a chance that an enterprising Laguna Beach chef is in the kitchen right now, feverishly working on a way to bring the next big culinary trend to life.

The landscape is defined by food trends more than ever before. Naturally, these movements have a visible presence in  Laguna Beach’s perpetually vibrant and intriguing dining scene, as the following list demonstrates.

Hyper-Local Gardens: More venues have taken to growing fresh fruits and vegetables themselves year-round, either on farmland located a short distance from their doors or on land conveniently placed a few steps from the kitchen. Leading this charge in Laguna Beach is Craig Strong, executive chef of Studio at Montage Laguna Beach, whose massive beds of vegetation that stand adjacent to his venue not only provide a bounty of seasonal ingredients, but add an additional layer of beauty to the resort’s already breathtaking grounds.

Edamame: Those crispy soybean pods are no longer just a staple of the sushi counter. Maro Wood Grill uses the magic of mesquite to prepare their edamame, while Broadway by Amar Santana gently enhances their flavor with citrus salt, yuzu and lime juice. Edamame has been elevated to a place beyond the appetizer section at Umami Burger, who uses it to make their vegetarian Earth Burger patty.

Exotic Salt: The days of salt just being the tiny white granules that are lodged in a shaker at your table are long over. More and more chefs are utilizing salts that come equipped with a dazzling array of colors and flavor nuances, such as Himalayan Pink or Hawaiian Black Lava. The Beach House sprinkles Hawaiian Red and Sonoma sea salts on their Oysters Rockefeller, and Sapphire uses sage-rosemary sea salt on their home-fried potato chips.

Seaweed: It only seems fitting that a town that borders the Pacific Ocean would embrace the concept of expanding marine algae’s role as an ingredient from beyond niche Asian neighborhood restaurants and into the mainstream. Laguna venues such as Katsuya, Starfish and Watermarc Restaurant take great care to ensure that the seaweed they serve up is an exquisite, flavorful treat.

Pickled Delights: An increasing number of people have discovered how delicious a radish or a tomato can be when it has been soaking in tart, briny goodness, and it is a moment of eureka that venues like Raya at Ritz-Carlton, Laguna Niguel, 230 Forest, Umami Burger and Mozambique are more than happy to oblige. LBM