Big Changes to a Small Campus

The Laguna College of Art & Design continues its upward—and outward—growth. –By Michelle Garrido 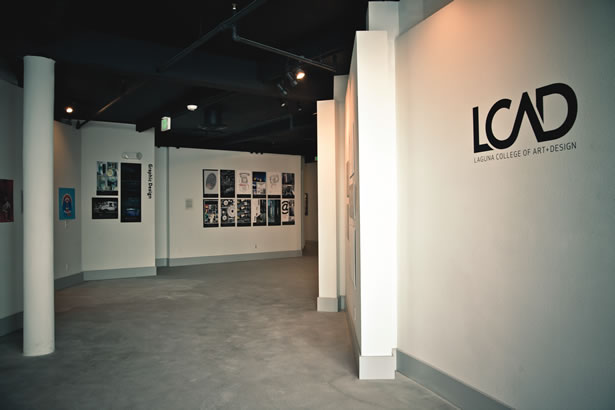 The Laguna College of Art and Design (LCAD) launched the 2010/11 academic year with some notable changes. The most obvious addition is a tech-ready, 9,500-square-foot building that houses upper division classes for three of the school’s four visual communications programs: graphic design, animation and game art.

Dubbed the Big Bend Campus for its stretch of Laguna Canyon Road, the new space sits just a half-mile north of the main campus. In many ways, it represents LCAD’s literal and figurative growth.

The school’s attendance has increased about 5 percent annually over the last 10 years. In addition, LCAD’s classical art studios seemed antiquated when confronted with modern, computer-driven curricula. To keep pace with modern twists on traditional art, a more sophisticated space was necessary.

“My staff and I had a general awareness regarding the inadequacies of those studios,” says Dennis Powers, the school’s president. “They were small. We were able to fit them with computers, but the facilities really were inadequate.”

Once used for offices, the new visual communications building had been completely gutted by the owners in anticipation of a change in tenants. When LCAD signed on for a five-year lease, the owner agreed to build out the space according to the school’s specs.

Members of the graphic arts, animation and game art staff worked with the owners’ architect to design teaching spaces that maximize efficiency and creativity.

“We got to create really state-of-the art classrooms for these visual communications departments,” Dennis says. “The teaching facilities are just about as modern as you can get.”

For example, an animation teaching space looks like a theater, with room for large screens up front and desks that ascend like theater seats toward the back. With a nod to the collaborative nature of their industries, the graphic design and game art studios have large worktables where students can work in teams.

The most exciting change for students is the addition of the latest computer software and hardware. Animation labs boast new, high-end computers at each student workstation. Although students use their own laptops for animation studio classes, the graphic design and game art studios sport high-powered, built-in desktop computers at every student terminal.

“Each of the classrooms also has a teaching station designed for that particular teaching method, complete with high-end computer power built into the furniture,” Dennis explains.

Because each of those shiny, new computers requires bandwidth giddy-up, the building is wired for speed with blazing fast Internet capability, complete with wiring to central servers throughout the ceilings and walls that feed into each of the classrooms. High-tech capabilities combined with new heating, cooling and ventilation offers a clean, efficient environment.

“I have been teaching at LCAD for more than 10 years, and this is the biggest leap forward I have seen the school make,” he says. “Each studio is around three times the size of our old studio spaces. With the increase in room size, we were able to make areas for workstations, laptops and for group discussion.”

Dan, who graduated from LCAD in 1999 with a degree in graphic design, says the studios’ 5.1 surround sound and high-def projectors make for a powerful, seamless teaching experience.

“My presentations now have visual and auditory impact to grab the students’ attention,” he says. “I lecture from a wired podium with a fast workstation. At my fingertips, I can control the volume and the lights.”

The Big Bend space allowed for some much needed changes on the main campus. Smaller teaching spaces got an overhaul by tearing down walls and adding new lighting, paint and flooring.

“We were also able to create space for an on-campus student lounge, and we moved all of our liberal arts courses—history, art history, ecology and things like that—from what we used to call ‘south campus’ to the main campus.”

The school turned the space vacated by liberal arts into LCAD’s first-ever student housing. The South Campus Residence Hall has five suites with a total of 21 beds.

“With student housing a mile or so from the campus and Big Bend a half mile away, we instituted a shuttle service that goes up and down the canyon hourly, stopping at each of our four sites and also downtown,” Dennis explains.

LCAD’s modest yet notable growth is perfectly paced, Dennis says, noting that the school wants to balance expansion with what’s best for students and the community.

“We’re not trying to bust at the seams,” he says. “We’re trying to grow intelligently and in steps that aren’t going to have a negative impact on the canyon or on the students.” 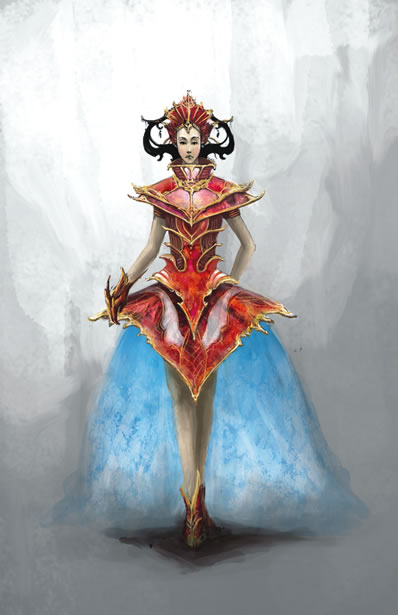 With modern digs to set the stage for LCAD’s high-tech future, it seems fitting to post a pioneering leader at the helm. To that end, the college has hired Jack Lew as vice president and dean of visual communications. A look back at Jack’s career reveals an inspiring crosshatch of academia and industry that’s perfectly suited for his current role.

Jack earned a MFA from Syracuse University and a BFA from the Cleveland Institute of Art. He taught and developed illustration programs at the Memphis Academy of Arts (now the Memphis College of Art) before moving to the Kansas City Art Institute, where he served as chair of the Design Department. During his 16-year tenure in Kansas City, Jack helped Disney develop its first internship program—a move that would land him an unexpected dream job.

“I was at Disney for a seminar, and they asked if I’d be interested in working for them,” Jack recalls. “I had never thought about it—but what an amazing opportunity. The next thing I knew, I gave up my tenured position and headed to Orlando for one of the best jobs I’ve ever had.”

As the senior manager of artists and professional development for Disney’s Orlando-based animation studio, Jack wore many hats, each complementing his love of teaching and collaboration. He worked with film artists and directors on titles such as “Mulan” and “Lilo and Stitch,” oversaw artist education and training, and managed the internship program. Two aspects of his job that would prove especially useful in the future involved art-school outreach and portfolio review.

“We saw hundreds and hundreds of portfolios from art students who dreamt of working at Disney,” Jack says. “It was a really great learning experience, seeing the work of so many young artists.”

In late 2003, after Jack had spent nearly seven years with Disney, the corporation closed its Florida studio. He was set for a return to academia when a friend working at Entertainment Arts (EA) gave his career an unforeseen reboot.

“He said, ‘You have got to see some of the stuff we’re doing here,’ ” Jack recalls. “I looked at the games they were working on, saw the sophistication of the graphics. I was amazed. It was pretty exciting stuff.”

Jack soon accepted a university relations position with EA—a major player in the video game industry—that allowed him to serve on a number of art school and university advisory boards helping to shape curricula.

“I presented to at least 50 campuses throughout the United States and Canada, letting students know what skill sets and talent we required,” Jack says. “I also saw what was going on at various art schools. Even in industry, we always looked to the universities and colleges for the great new ideas.”

A teacher at heart and self-admittedly restless, Jack spent five years with EA before returning to academia as the director of collaborations for the University of Central Florida’s new Center for Emerging Media. That role parlayed into a position as chair and then interim director of the art department, where Jack helped merge the existing art and digital media departments to create the School of Visual Arts and Design.

Jack’s first visit to LCAD came in 2007, when he served as a commencement speaker. Although impressed by the school’s atmosphere and stellar reputation, he didn’t consider working there until recently, when he visited his son in Newport Beach. While in the neighborhood, Jack had lunch with two LCAD deans—Jonathan Burke and Helene Garrison—who spoke passionately about the college, the Big Bend campus and the future of the visual communications programs.

“They were interested in having someone be the dean of this unit,” Jack says. “It was very enticing. They thought my industry and academic experience would be ideally suited to move this area forward.”

“He can bring people together to generate new ideas and new directions,” Dennis says. “He knows how to mold the curriculum of the more advanced courses so the students are well-trained for their industries.”

Maximizing the groundwork laid by LCAD’s visual communications faculty, Jack plans to bridge the gap between academia and industry further by leveraging his many professional connections. Inviting pertinent industry insiders to serve as guest speakers and teachers is just one part of his plan.

“The other part is to develop collaborative co-ops and internships, where students can actually work for these organizations and get credit while taking classes,” Jack says. “I got a lot of experience in those areas working at both Disney and EA.”

By remaining connected to changes happening in industry, Jack hopes to super-charge the school’s already spot-on curricula. The right decisions and planning will ensure the students’ education is relevant not only today, Jack says, but also in the future.

“In the past, illustrators created static images for books,” he explains. “Now that we have the iPad, [why] would we not want to take advantage of that technology to create different types of narratives and illustrations—illustrations that are animated, with audio components. We as artists must adapt our talent to the new technologies.”

It’s not just technological changes that students can incorporate into their artistic cache, but societal ones as well. The increasing popularity of action sports, such as surfing and snowboarding, demands attention—especially in Southern California. Graphic Design chair Catherine Eure has already taken steps to create action-sports themed design classes, and Jack is motivated to expand upon her idea.

“I can’t imagine any other art school or university that can legitimately and naturally offer that type of curriculum,” Jack says.

Jack has worked with some heavy-hitters in the industry, and there’s no doubt his vast experience will make a positive impact on Laguna’s relatively small art college. But for Jack, LCAD’s smaller size was part of its appeal.

“This college is small enough to be nimble so we don’t have to go through lots of layers to get things accomplished,” Jack says. “I’ve had time now to work with some of the teachers, especially the chairs of the departments that I’m going to oversee. They’re all really talented, dedicated people with lots of great ideas.” LBM