Laguna has a long history as an artists’ colony, and many of the local legends have built a live/work area where they can immerse themselves in their craft. Here, we get an inside look into the unique spaces of a glass blower, sculptor, silversmith, painter and mixed media artist, exploring how their customized surroundings facilitate their creative pursuits.

Painter Scott Moore starts his projects at the computer, searching eBay for a nostalgic item reminiscent of his childhood. It may be a wooden toy car he had when he was a boy, a vintage clock radio from his grandmother’s house, or a snow globe souvenir from a family vacation. His inspiration comes from the Internet and makes its way onto the canvas in his home studio in Bluebird Canyon.
Scott has shown his work, which he calls “out-of-scale realism,” in the Festival of Arts since 1980 and has sold every oil painting he has created.

Early on in his career, he and his wife, Carol, decided to excavate beneath their home to create a lower second floor. “We spent everything we had to build the 1,000-square-foot studio, but it was nice to have it on [a] different level,” Scott says. Most days, he can be found peering at a canvas balanced carefully on an easel in the middle of the room, brush in hand, surrounded by tubes of every color of oil paint and a variety of paintbrushes. Attached to either side of the easel are photographs that inspire the painting. 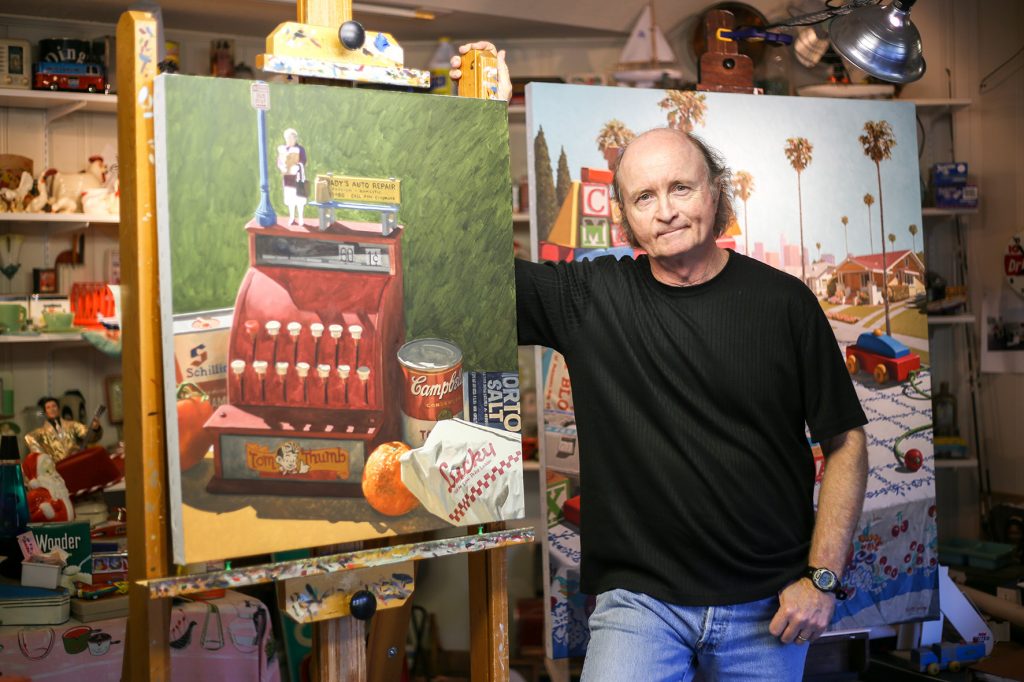 The studio resembles an antique store. Along the back wall, shelves are filled with old-fashioned tchotchkes: old metal toy cars, glass milk bottles, retro analog clocks, Lincoln Logs, a record player, books such as “Lonesome Dove” and “The Grapes of Wrath,” an aged postcard from Hawaii—it’s like stepping back into the 1950s or 1960s.

His studio is not just for art, though. Scott has a TV and a stationary bike that he uses to exercise while watching old shows or movies to get ideas for his paintings. Distractions can be a temptation for those with live/work spaces, but Scott avoids that by having a regimented schedule from 8 a.m. to 5 p.m. during the week. “Sometimes visiting with clients can cut into my weekends,” he says.

“But it’s a small price to pay to be able to work for myself.”

Many Lagunans have seen John Barber at work—he has offered glass blowing demonstrations at the Sawdust Art Festival for 37 years. He earns many “oohs” and “ahhs” as he twirls the molten glass in the 2,200-degree furnace and then blows it into the shape of a vase, Champagne flute, bowl or any number of art pieces. “Glass is exciting and challenging,” John says. “You have to be focused and in the moment. It either happens or it doesn’t. And you best like it hot. If you can’t take the heat, walk away.” 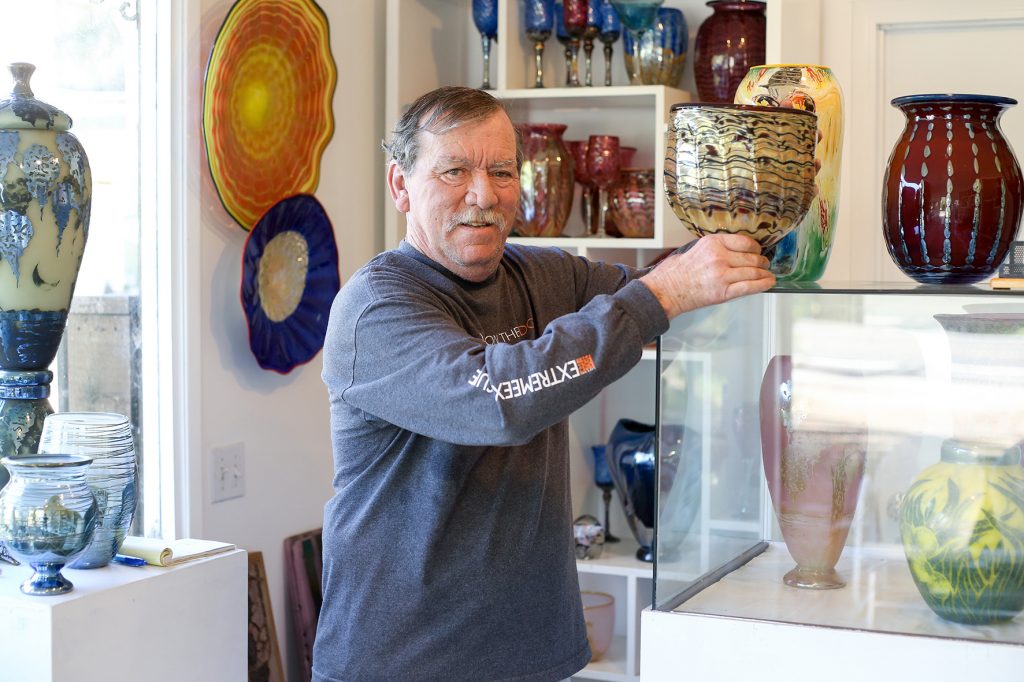 When John isn’t at Sawdust, he is creating his masterpieces using the same process at his home studio in Laguna Canyon. After he moved to the property in the 1980s, he converted the backyard from an open space into an outdoor studio by building a covered work area on a concrete slab, running a gas line and installing the furnace.

At the front of the property are his 900-square-foot home and his showroom. The latter, with wood floors and white shelves that extend to the ceiling, displays works such as his vases in various shapes and sizes, wine glasses, decorative platters and bowls, sculptures, globes, etched glass and custom chandeliers.

A gravel path leads farther down the property to the 1,500-square-foot studio. To the left is a storage area and outdoor workspace where John fine-tunes his masterpieces with tools of the trade such as blowpipes, steel rods, sheers and optic molds. Next to the workspace is the large furnace where the glass becomes malleable at high temperatures. John inserts the blowpipes into the molten glass and retrieves a blob to blow into the shape of his choice, carefully, to avoid getting burned. His home studio also allows him to do glass casting, which he used to create the 27-foot-long mural, “Eternal Sunset,” at the entrance of Montage Laguna Beach.

The area’s beauty surrounds John as he works in his outdoor studio; the property ends at the canyon wall. “We have such a picturesque backyard,” John says. “It’s a beautiful environment in which to live and work.”

When sculptor and painter Terry Thornsley, a veteran artist of the Festival of Arts, has to go to work, he has a short commute … 24 steps down to his home studio in Laguna Canyon. While designing the 1,100-square-foot workspace, he took into consideration how much sun or shade the area would have; the angle of the light (important for painting); wind direction, to ensure a breeze would go through the workshop; the height of the ceilings for larger projects; dust collection in the grinding room; and storage for completed projects.

“It was nice to be able to design a space that fit my needs,” Terry says.

Since his work is inspired by nature, he enjoys the tranquility of the area. “I especially love the deer, owls, hawks,” he adds. “It’s a beautiful place. I try to focus on the wildlife, not the [thousands of] cars a day that drive by my house.”

Upon entering the main door on the ground floor, there is a casual showroom that includes a dozen alabaster stone carvings of various forms, from human to wildlife; a dozen sizeable bronze sculptures of varied subjects; and paintings, mostly watercolor, of Terry’s Southern California favorites, such as deserts and local beaches. Past the showroom is the primary indoor workspace, where

Terry can be found equipped with a helmet and thick gloves to do tungsten inert gas welding on his bronze sculptures. He uses an air compressor to run high-speed die grinders and sanders, and an assortment of hand tools correct flaws or add texture. 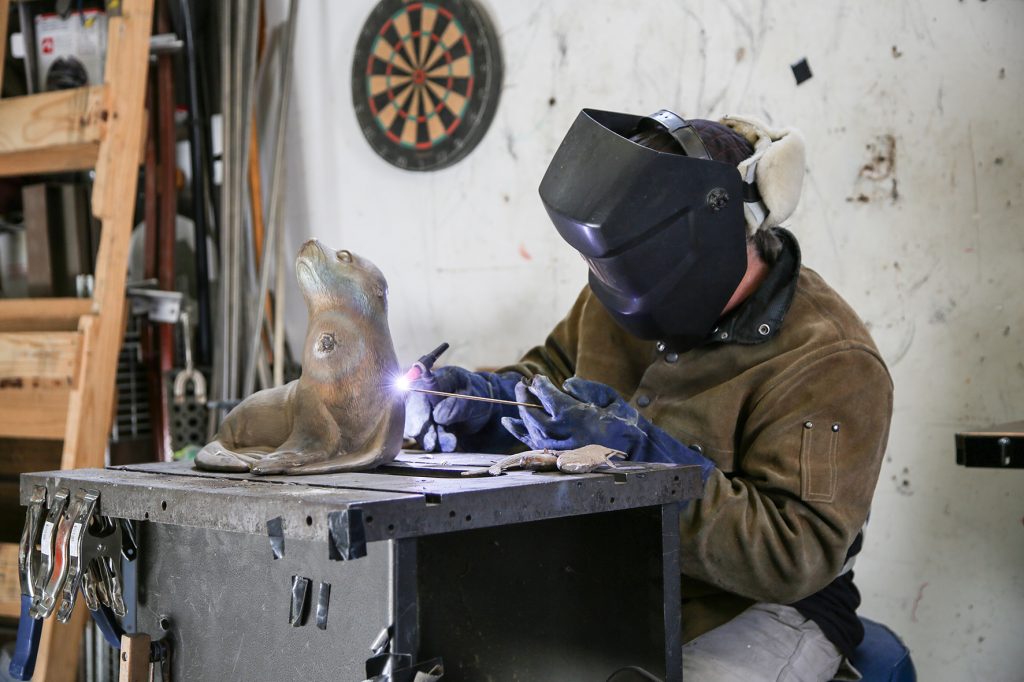 To create molds for his bronze pieces, Terry has a special area where he uses thick wax forms to carve prototypes. He makes the sculpture out of wax, applies a silicone rubber over it, coats it with plaster and eventually sends it off to a foundry to be cast.

When he’s finished for the day, he retreats upstairs to the open-concept, one-bedroom living area. A balcony located off the living room houses a hot tub and features a beautiful view of the canyon and two adjacent redwood trees.

Silversmith David Nelson doesn’t need much room for his craft, but having an area separate from his living space makes all the difference. “If it was in the house, it would be distracting,” he says. “It’s more important to be able to focus on the art.”

Since there’s no long commute required, David is able to create a flexible schedule that fits his lifestyle. “Being an artist is a gift that I was given,” he says. “My work is my love, my life, my passion. By having my studio at home, I can work whenever I want, day or night.”

Working in such a detailed art form, David doesn’t require much in the way of space. His pieces—silver and gold jewelry, belt buckles, money clips and more—are made primarily with sheet and wire fabrication with overlay, combined with stone setting and inlay. Most of his work is done from a 3-by-5-foot workbench in his home studio; the space is small, but contains everything he needs.

Perched on a stool, he peers through a large, lit magnifying glass clamped onto the workbench to begin his work with the sterling silver wire or sheets. A jeweler’s saw allows him to cut details into pieces, while other nearby tools include a torch, buffer and soldering iron.

A Sawdust Art Festival participant for 45 years, David adds that there are increasingly fewer places in town left for up-and-coming artists to carve out joint homes and studios. “It’s gotten much harder to survive and … [make] a decent living in Laguna Beach as an artist,” David says. “Because of that, Laguna Beach is forced to import artists. We need to make the town more artist-friendly by creating more affordable live/work spaces or we could lose our bohemian artists community that made people want to live here in the first place.”

Walking through artist Pat Sparkuhl’s home is like wandering through a gallery. His work can be found tucked into corners, hanging on the walls, teetering in the yard, adorning shelves—even dangling from the ceiling. Made from an assortment of items, such as dolls, shoes, crowns, flags and money, his mixed media work evokes contemplation and curiosity. He particularly enjoys recycling things and transforming them into works of art; in his front yard are two columns made from old shoe heels, titled, “A Pair of High-Heels.”

“My life is about making art that sparks discussion, primarily about social issues,” Pat says. “I have a disdain for war, and religion is a big deal to me. I’m spiritual, but not associated with conventional religion.” Behind his house is his two-room work studio, where he has nearly 40 Bibles displayed on a wall, inlaid with various objects meant to convey messages about society and religion.

His desk is scattered with objects that may seem like trinkets or displaced trash, but when placed together in a meaningful way, they come to life. A stack of old Bibles, a metal sword and a porcelain figure become a statement against child molestation by priests. “I am a visual person,” Pat says. “I have to have things to look at in my workspace.”

Pat has lived in his home since 1979, and he and his wife, Heather, raised their two (now grown) children there. His work has been on display at the Festival of Arts for more than 30 years, and he taught art at Orange Coast College for 34 years. Although he has since retired and is focusing on curating for the Festival of Arts, his studio still serves as his creative haven.

“I still work every day,” he says. “I like to be in my studio to keep myself familiar with what I’m dealing with. Having a home studio allows me to be very spontaneous, but a good work ethic is fundamental. You have to do it in a rhythmic practice and do it every day.”