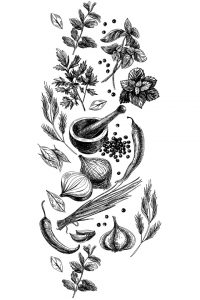 These five age-old spices are flavoring agents in dishes across town, but they offer myriad health benefits, too.

When it comes time to make a dinner reservation in town, our taste buds are truly at the helm. And, whether it’s Caribbean, Spanish or Mediterranean cuisine that we crave, it’s really the flavors of spices—from cumin to paprika or saffron—that beckon us through the doors of Laguna’s restaurants. The litany of diverse culinary options in town is a strong indicator of the increasing globalization of various ethnic cuisines, many of which spotlight pure spices or blends steeped in centuries of tradition.

Spices in their purest forms offer both tantalizing flavors and ample health benefits. They’re hugely helpful to people trying to rein in their consumption, for starters, because spices amplify satiety, the feeling of being physically full that’s crucial to preventing overeating. And they have the power to prevent diners from piling on less healthy condiments like salt and cheese, as when the right spices are present, a dish has all the flavor it needs.

Yet, far beyond their roles as weight-loss devices, it is believed that spices also offer a host of health advantages, from serving as an anti-inflammatory to relieving indigestion and lowering blood sugar. Spice Merchants Laguna Beach owner Paul Greer says that these high-impact benefits haven’t gone unnoticed by locals, who have been frequenting his shop more and more as spices have increasingly found themselves in the limelight.

“A lot of people come in already knowing about the spices they’re interested in, but they want to get fresher versions of them, and then there are people who want to get away from [pharmaceutical] drugs and medicines and try to do things more naturally,” Greer says of spices’ growing appeal both for culinary and health purposes in town.

Meanwhile, local chefs have begun playing with classic spices in new and exciting ways, creating the framework for a vibrant style of coastal cuisine that could only exist in Laguna Beach, where optimal health and happiness often go hand in hand.

One of the main spices used to make curries, turmeric is native to Asia and derived from a ginger-like root. A staple of ayurvedic (holistic) medicine for centuries, it gets its golden-yellow coloring from curcumin, a plant compound that, following lab and animal studies, has proven anti-inflammatory, anti-cancer and antioxidant properties. Today, turmeric remains a favorite of holistic health practitioners. And Greer, who considers himself a serious proponent of the spice’s life-changing properties, uses it daily as a preventive health measure. “I take about a half to a full tablespoon in a smoothie every day—I’ve done so since I opened the store more than three years ago—and I feel a clear physical difference. It works,” he says of the spice, which is also believed to alleviate heartburn and upset stomachs and ease joint pain and arthritis.

When cooking with turmeric, Greer recommends mixing the spice with other ingredients to dull the earthy, bitter taste for which it is known.

Traditionally used as both a garnish and a seasoning, paprika is the result of grinding dried red peppers into a fine powder. Most paprika is produced in South America and Spain, although it’s also commonly associated with Hungarian cuisine; today, the finest-quality paprika still comes from the Eastern European country.

“Hungarian paprika is sweet, and Spanish paprika is generally …  smoked,” Greer says of the spice, which is often mixed with cayenne pepper to generate the spicy blend with which most commercial audiences are familiar. “Many of the health benefits of paprika involve vitamins—it’s a major source of vitamins A and E … [as well as] iron.” Vitamin A is known to help improve vision, while vitamin E is an antioxidant that helps protect the body from damage by free radicals.

Recent studies have found that capsaicin, an active component in peppers, can also help alleviate pain in the body, and boasts antioxidant and anti-inflammatory properties. And some studies suggest that capsaicin may even help suppress appetite, which can help with weight-loss efforts. But even beyond its positive effects on the body, paprika is a beloved flavoring element and colors the cuisines of Africa, India and the Middle East in dishes like stews, soups and dry rubs for meats.

A widely popular spice, cumin frequently finds its way into spice blends and seasonings. Derived from the seeds of an herb in the parsley family, the highly aromatic spice is considered a cultural staple in several regions around the world, including Africa, Asia, Mexico and the Middle East, although it’s largely produced and overwhelmingly consumed in India, where it’s typically blended into curries. It’s also used often alongside chili powder and commonly incorporated into Mexican dishes (many of which include chili powder, which is also blended with cumin).

“It’s great for regulating digestion,” Greer says of the spice’s health benefits. And its long history of medicinal use also includes treating respiratory issues and diseases. Plus, cumin seeds are strong sources of iron—a single tablespoon of the spice provides roughly 20 percent of one’s recommended daily intake—as well as manganese and other vitamins and minerals. And a recent study has even found that cumin, which is packed with antioxidants, can actually help the body to better cope with stress.

According to Greer, when it comes to saffron, “a little bit goes a long way.” Just adding a couple of threads to a dish will color one’s food, giving it a deep golden hue, and adding a distinctly earthy flavor and strong aroma. “Saffron is mostly used for coloring and flavoring food naturally,” Greer explains of the spice, which is primarily grown in Mediterranean and Middle Eastern countries; Iran produces more than 80 percent of world’s saffron supply each year.

“It’s often called the most expensive spice because it’s very labor-intensive to produce,” Greer continues. “It’s all hand-picked from flowers.” In fact, it takes roughly 150,000 of the vibrant purple flowers that yield the threads to produce only 2.2 pounds of saffron.

Still, Greer says, the benefits of saffron far outweigh the effort it takes to collect it. “Saffron has a lot of potassium, which aids in balancing fluids in your cells,” he explains. A cornerstone of traditional healing, saffron has been used to treat common colds and alleviate pain, cough symptoms and even asthma for thousands of years. The spice is also believed to help with regulating blood sugar and is a solid source of iron and vitamin C.. Additionally, saffron is known for being a natural aphrodisiac; it is said that Cleopatra bathed in the spice to boost her allure.

One of the most commonly used spices and flavoring agents, cinnamon is harvested from the inner bark of the cinnamon tree, which grows primarily in Asian countries like China, Indonesia, Sri Lanka and Vietnam. “There are two varieties of cinnamon,” Greer notes. “… Cassia—which is what you’ll find in most American grocery stores, and we carry three types of that—and then there’s Ceylon, which is what most people call the ‘true cinnamon.’ ” While cassia cinnamon is far more common, Ceylon cinnamon, which is grown in Sri Lanka, is actually sweeter and more delicate in flavor.

When it comes to health benefits, some recent studies have led to the conclusion that cassia cinnamon demonstrates therapeutic effects when it comes to reducing blood sugar levels and may help in the reduction of Type 2 diabetes, though there’s limited scientific evidence available at this time. Some clinical trials have also proven that cassia cinnamon may lower total cholesterol levels in the body.

More difficult to find and more expensive than cassia, true Ceylon—the name for the region known today as Sri Lanka—cinnamon has functioned as a medicinal spice for thousands of years, used primarily to boost appetite and relieve indigestion. “One of the main health benefits of Ceylon cinnamon is that it helps jump-start metabolism and regulate body weight,” Greer explains. “It also has a lot of antioxidant properties that boost heart health, and it’s been shown to improve brain function.”