Inspired by a passion for music, Laguna’s only record store still thrives more than 50 years after it opened, much like the ever-popular vintage vinyl carried by the shop.

In June of 1967, Jim Otto attended the historic Monterey International Pop Festival. Already living as a hippie in Laguna Beach, he was searching for an aboveboard job that would draw on his love for music. Otto’s passion, coupled with his parents’ own retail experiences, inspired him to open Sound Spectrum that same year. Since then, his shop has been the town’s central hub for records, memorabilia and music-related apparel, and Otto continues to be a walking, talking Rolodex of musical history.

“Other record stores have come and gone,” Otto says. “A lot of our old customers still come into the store and, for them, it’s a flashback. I hear from people that it even still smells the same in here.”

He says he likes to think of Sound Spectrum as a “college of musical knowledge”: He and his staff spend time with customers to turn them on to music they might like or may not have heard otherwise.

“People are able to get their music here without leaving town. They know we’ll spend time with them when they come in,” Otto says. “Sound Spectrum and other small businesses keep the spirit of the town alive and are part of the thread of Laguna.”

Each year, Sound Spectrum participates in Record Store Day, a worldwide event started in 2008 for music shops to commemorate the unique culture of these types of stores. Participating businesses buy limited edition records to offer throughout the day, while also hosting a variety of festivities and activities to entrance shoppers. The next Record Store Day will be April 20, 2019, and Sound Spectrum will once again take part.

The shop was also one of the first independent music stores to report its number of records sold via Nielsen SoundScan, a system that helps track music purchases in the U.S. and Canada. SoundScan is also used to compile the Billboard music charts.

“Small store sales were originally left … [off] of the charts because they weren’t tracked. Artists were lower on the charts [than they should have been] because of this,” Otto explains. “Smaller stores like us got involved to keep track. They gave me a computer to do this back then, but now we just download the barcode scans and send them to Nielsen.”

After the fire that occured here in town in 1993, Otto wanted to give back to the community in the best way he knew how. So he offered to replace the lost music collections of those affected by the fires at cost.

“People came in to replace what they could. Some even bought 100 CDs,” Otto recalls. “Generations of people come back to visit this store with their kids and grandkids, and a lot of them remember that we did that. Music means a lot to people.”

Sound Spectrum offers a variety of new and used vinyl, artwork and apparel as well as knowledge and history from the well-versed employees. 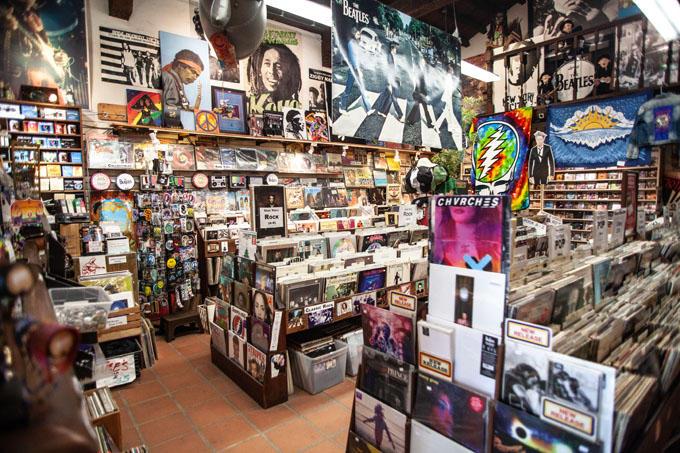 With the recent resurgence of vinyl popularity, Sound Spectrum is a great place to discover new records as well as locate old favorites. Part of the store’s selection has been secured through buying and trading with customers, who bring in pieces from their private collections. “Kids brought back vinyl about 10 years ago. Today, vinyl … [sells] three times as much as CDs,” says Greg White, the assistant manager at Sound Spectrum. “We’re restocking new vinyl all the time and buying people’s old records for cash or store credit.” Sound Spectrum showcases an extensive new and used vinyl collection of classic rock, pop, jazz, world beat, reggae, electronica and more. Collectible vinyl and rare items—like The Beatles’ album “Yesterday and Today”—are also waiting to be rediscovered in the racks.

“We like to promote and support local artists, both musical and visual,” notes Wave Baker, the store manager. “Our most notable art piece is probably the Bowie painting by Bradford J. Solomon. We have other local guys’ art here, too.” Acrylics on canvas and oil paintings, as well as a selection of tapestries and posters, can be found throughout Sound Spectrum. “This is a fun store—good for kids of all ages,” says Baker, who takes care of the store’s ordering. “A lot of young people come here to just hang out, and we talk to them about music, art and history.” 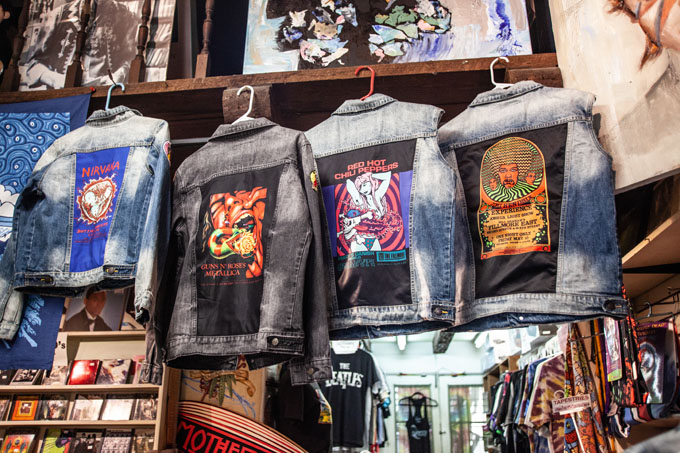 Sound Spectrum offers many items one would hope to find in an old-school record store, including T-shirts, record players, pins, patches, headphones and jewelry. Crowded with eye candy and endless items for purchase, the store’s walls promise a trip down musical memory lane. Sound Spectrum recently began carrying Dragonfly Clothing’s denim jackets, which are handmade and exclusively utilize the artwork of legendary concert promoter Bill Graham. Also beckoning to customers are racks of rock T-shirts that include sizing for men, women, children and infants. Record players ranging from top-of-the-line Audio-Technica products to beginner-level portable turntables line the back wall of the store. “People have an emotional connection to music and their collections, which includes the memorabilia and clothing that go along with the albums,” says store owner Jim Otto. “Finding new music to add to that collection keeps record stores alive.”