Exclusive Allview Terrace houses a quaint hillside community and one of the area’s most beloved landmarks.

Situated in the hills of north Laguna, the Allview Terrace neighborhood is perhaps best known as the home of the Hortense Miller Garden. Residents have benefited not only from the beauty of the garden, but also from the entrance gate that was installed when Hortense deeded her property to the city of Laguna Beach in 1976. Following her donation, locals became concerned that their single-street community would see an influx of traffic as a result of visitors flocking to the area to see the garden; in response, the homeowners association had a gate installed at the entrance to the neighborhood, and the garden is now available to be viewed by appointment only. “Our secluded neighborhood doesn’t go anywhere, so there’s no through traffic,” longtime resident Pat Payne says. “It’s quiet compared to nearby areas.”
Over the years, the gate has become somewhat representative of the tranquil community in the hills. “The gate is a symbiotic situation with residents and the garden,” says Ruth Stafford, an Allview Terrace homeowner and member of the Friends of the Hortense Miller Garden.
Here, we go behind the gate and inside the stories of three historic Allview Terrace properties. 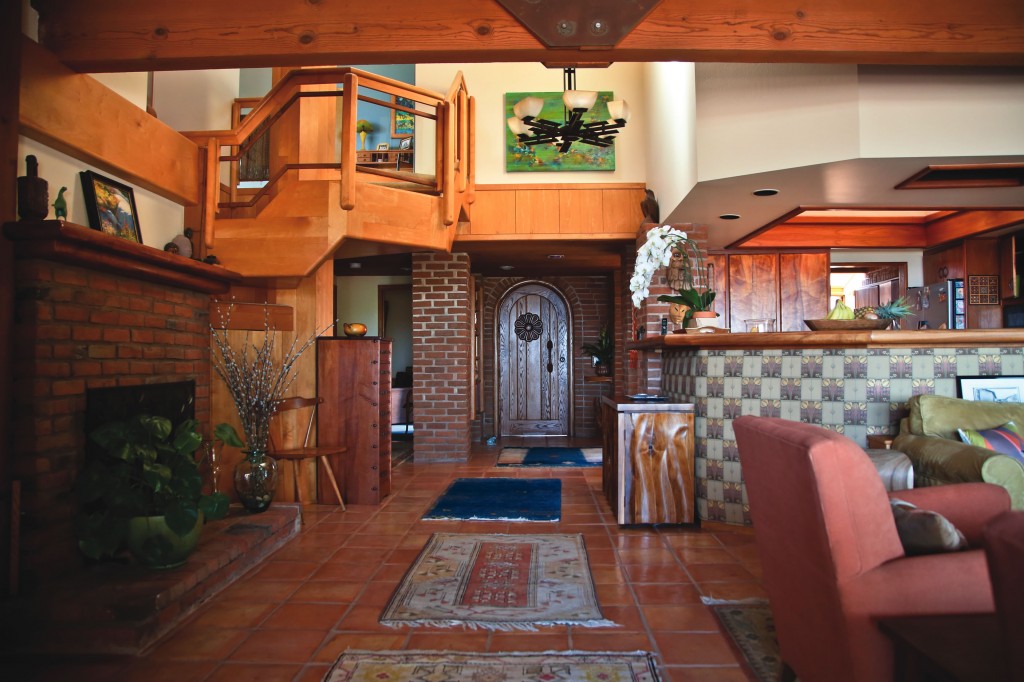 When Pat Payne and Ruth Stafford moved into their Allview Terrace home in 1974, the interior looked entirely different than it does today. Pat retired from the retail furniture business in 1985 and has spent the past 30 years customizing the home with various woodworking projects. “I always admired the really nice, high-end furniture, but we couldn’t sell it because we didn’t have the right clientele,” he says. Upon retiring, he subscribed to Fine Woodworking magazine and started copying what he saw in its pages. 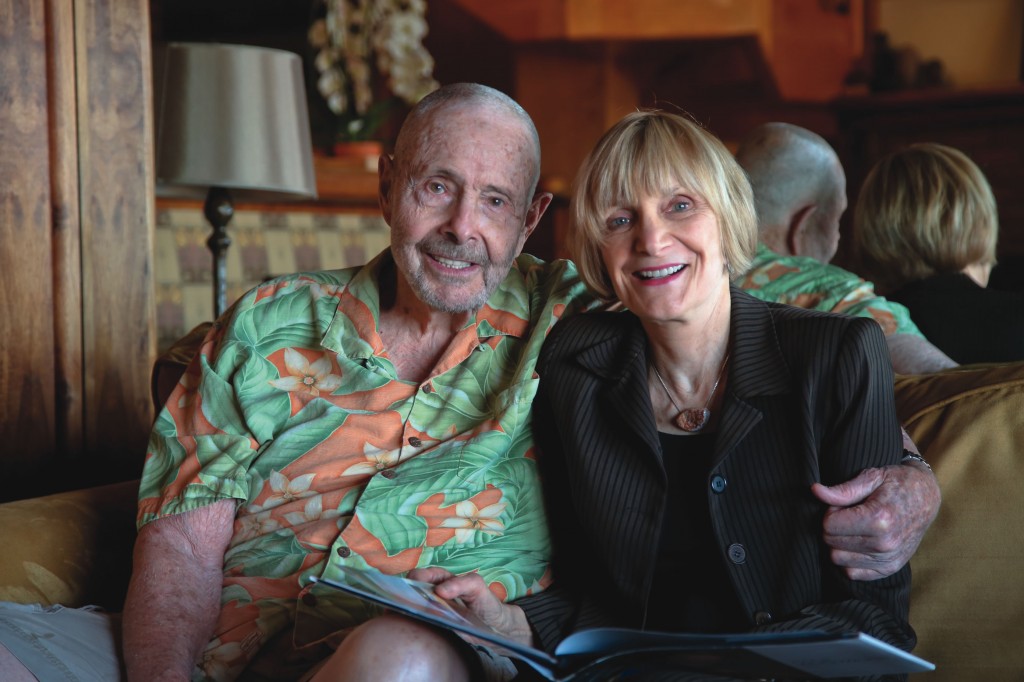 His first order of business was to remodel the bathroom into a room made almost entirely of wood. From there, he went on to build custom doors, window frames, walls covered with curly redwood, kitchen cabinets made from koa wood, dressers, bookshelves, a pullout bed, desks, mahogany tables, a maple staircase and just about anything else that Ruth asked him to create. “I love my husband’s touches,” Ruth says. “[They’re] so unique, but I have toned him down over the years. His stuff used to be so massive.” 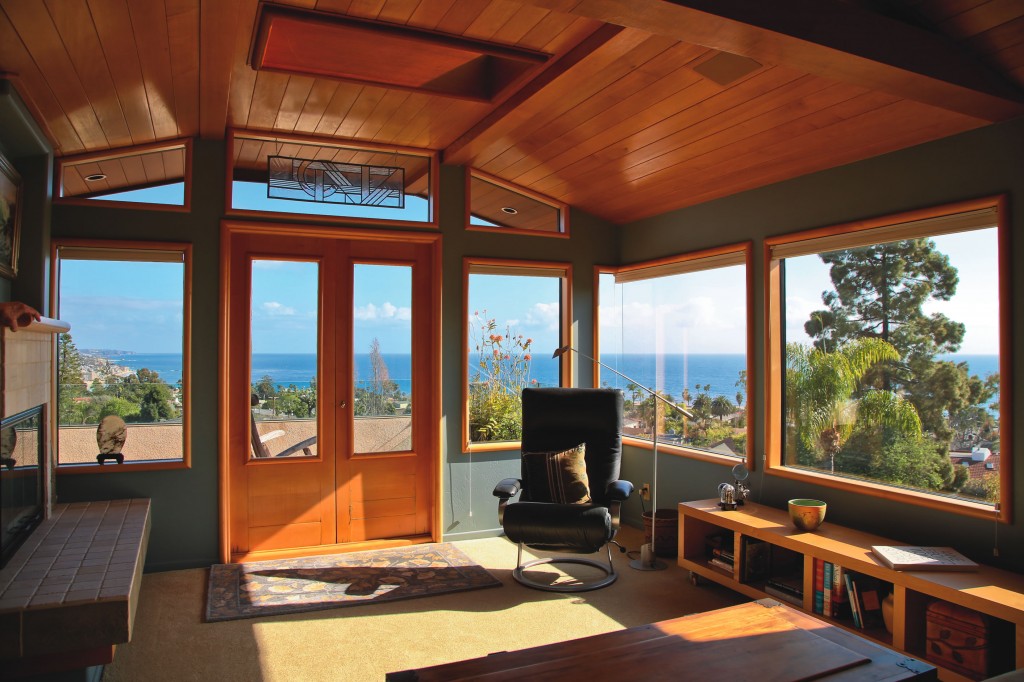 Likewise, Pat is quick to credit Ruth for the property’s personalized aesthetic. He insists that her design input has made the home what it is. “It was just a house when we bought it,” he muses. “Ruth turned it into a home.”

The home’s present design shows the progression of Pat’s work, his dedication to the craft and just how much his skills have improved over the years. “Our home has evolved from functional to artistic,” Ruth says. Some of Pat’s most recent work, which includes custom mirrors and doors, is comparable to what one might find at the Festival of Arts, but you’ll be hard-pressed to see Pat selling his wares—he creates purely for the love of the process and makes items for family only. To complement his woodwork, he also mastered the art of making stained-glass windows, which can be found throughout the home. 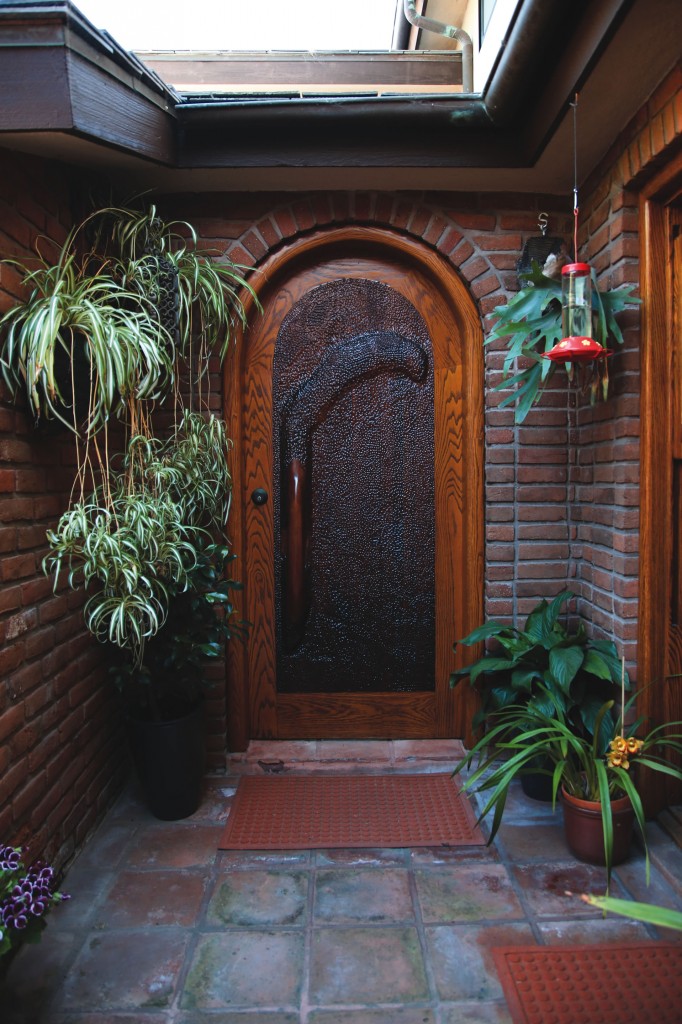 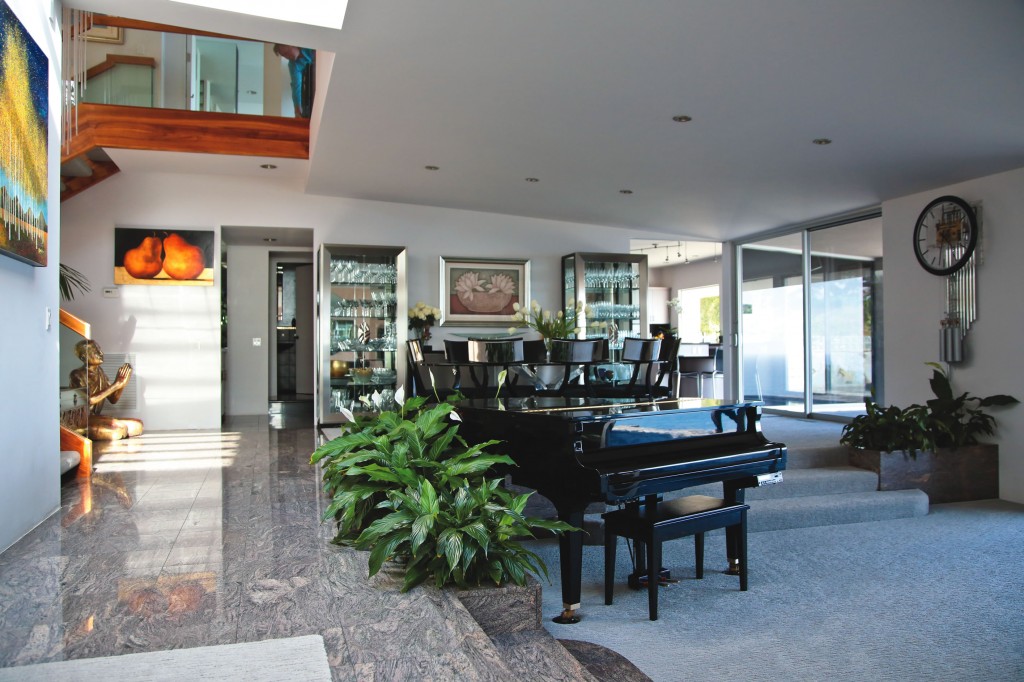 When Wayne Wright first walked into the house he now calls home, he knew he just had to have it. After a year of negotiations, Wayne finally convinced the owner to sell it in 1984 and has since enjoyed life in his dream home with his wife, Louise. “I was smitten from the moment I walked onto the property,” he recalls. “The view was stunning and … as I walked around I realized how very private it was. We couldn’t see a neighbor’s window from anywhere on the property. … The location was unbeatable at any price, and I knew right then we had to have it.” 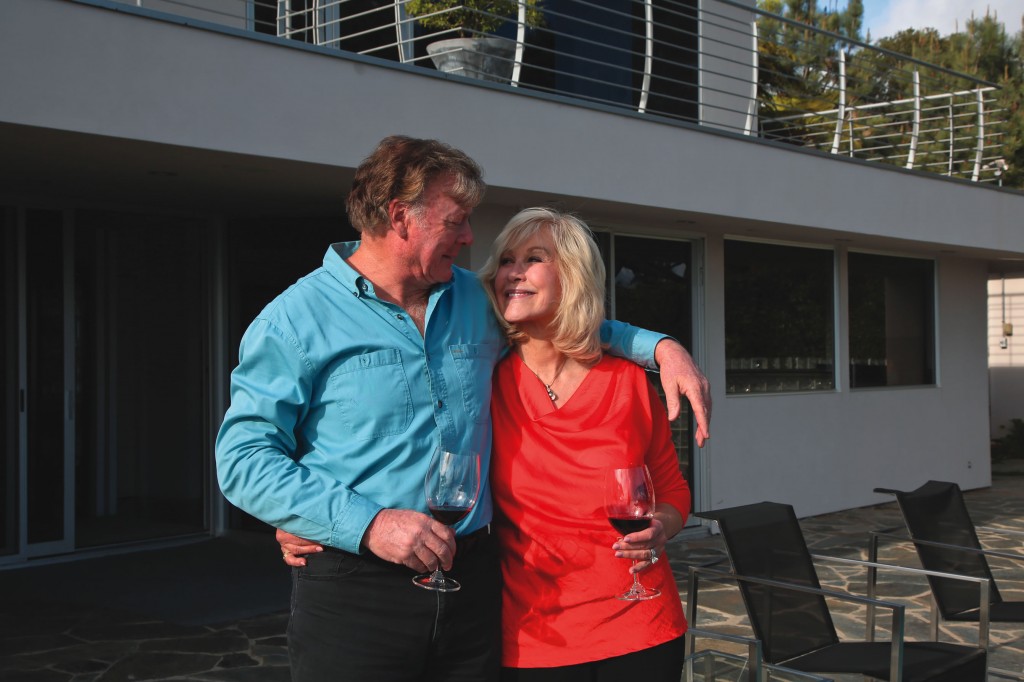 Inside the home, contemporary decor accents a neutral color palette and clean lines. Gray carpet and granite as well as purple marble add touches of understated elegance to the home’s muted design scheme. The kitchen and formal dining room also highlight shades of silver and gray, with a sparkling collection of crystal dinnerware taking center stage. One of the home’s most head-turning features is the pair of 700-year-old Tibetan temple guard statues that arrived courtesy of Louise’s cousin. “They were shipped to us from Tibet, with all the good karma still intact—at least we like to think so,” she says of the duo. “Asian elements combine well with a contemporary home.” 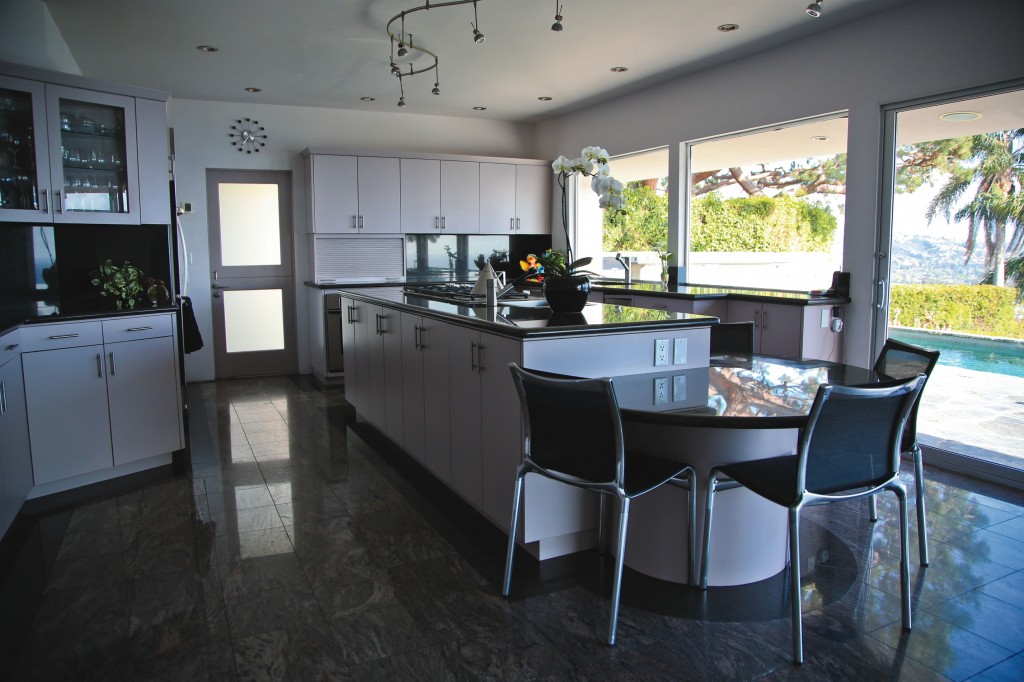 Since purchasing the property, the Wrights have embarked upon several renovations including adding a second story, second bedroom and office, thereby increasing the square footage of the home from 2,300 to 4,800. Outside its doors, expansive ocean views are a backdrop for the pool area.
The grounds also feature a large, grassy yard with roses bordering its perimeter and a 1,200-square-foot guest cottage with one bedroom and one bathroom. Wayne’s favorite part of the estate is that it houses two separate three-car garages to store his vintage car collection, which includes his favorite automobile: a 1966 Mustang convertible. 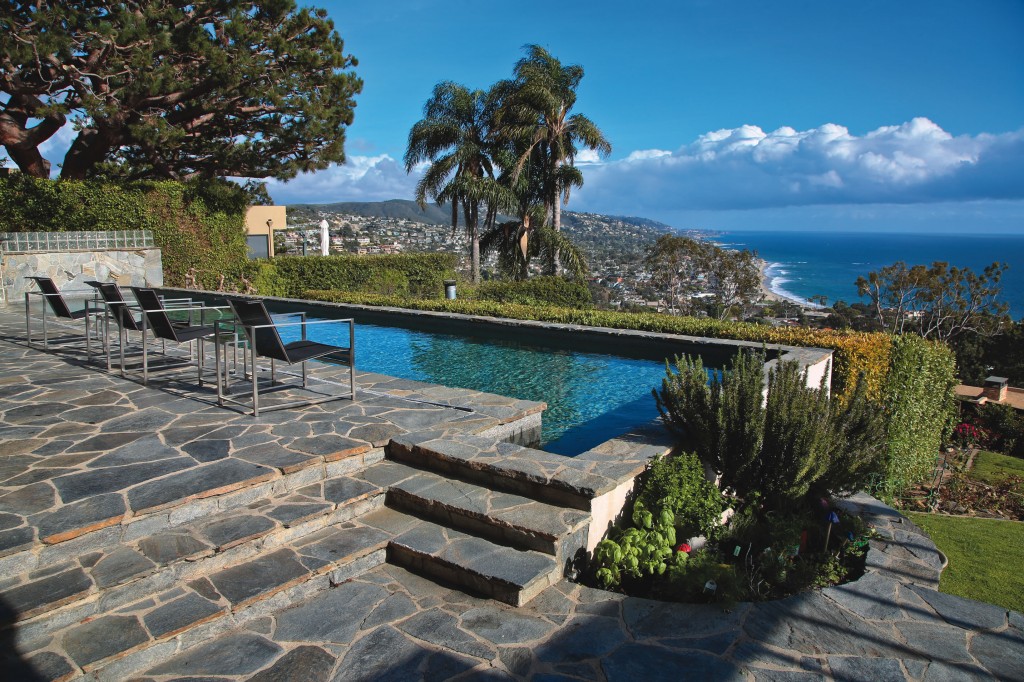 “I enjoy having a flat piece of land, car garages and privacy,” Wayne says of his home in Allview Terrace. “People in this neighborhood are great—we have made some best friends. Coming home is enjoyable.” 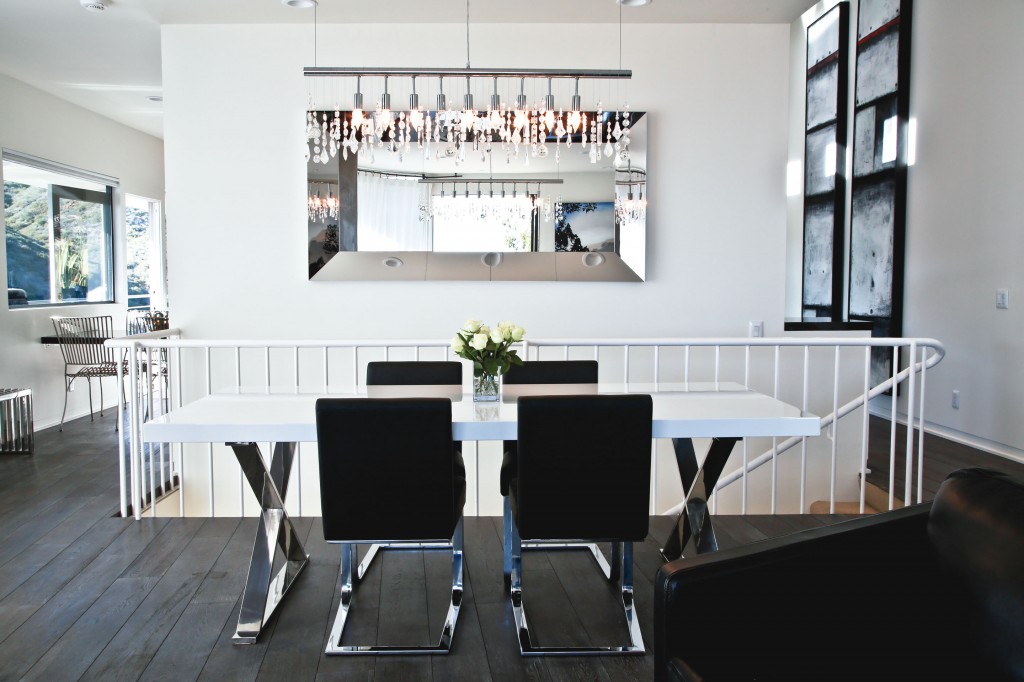 Designed by award-winning Laguna Beach Architect Mark Singer, Jonathon and Theresa Allen’s home in Allview Terrace is a juxtaposition of clean, contemporary design surrounded by rugged, wild, open space. “I like the flow of the house,” Jonathon says. “It is a unique, contemporary home with vaulted ceilings and lots of interesting edges—none of the walls are 90-degree angles—with unobstructed views of Boat Canyon and the ocean.”

The home was the last one built in Allview Terrace and has a coveted location on the edge of the neighborhood overlooking Boat Canyon with no neighbors’ homes blocking the views. “I love sitting on the balcony listening to the birds, watching people enjoying the hiking trails behind our house, seeing the ocean, it’s just beautiful,” Theresa says. The view is especially spectacular from the master bedroom that has floor-to-ceiling windows and from the master bath that has an infinity tub up against a large corner window. 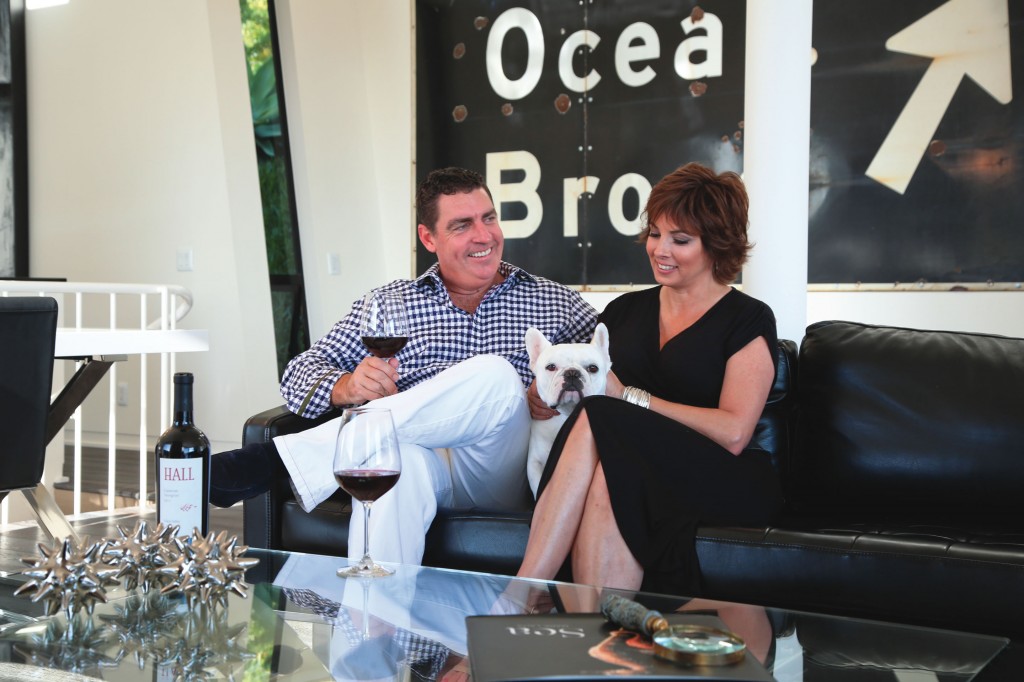 The decor of the home matches the architecture and can be described as minimalist modern with dark French oak floors and white walls, and black granite countertops with white cabinets in the kitchen. This is not the original interior. The Allens gave the home a “face-lift” when they purchased it, which included new flooring, custom kitchen cabinetry and updates to the master bath and garage. An eye-catching feature to the home is the large-scale artwork by local artist Shane Townley.

As for the neighborhood, Jonathon and Theresa feel lucky to live there. “We came from Del Mar where we didn’t know our neighbors,” Theresa says. “Now we have nights where we have dinners, go lawn bowling together, do yoga classes at our homes, have book club meetings … it’s very social. We thought we were just buying a house. We didn’t plan on getting a social life with it.” 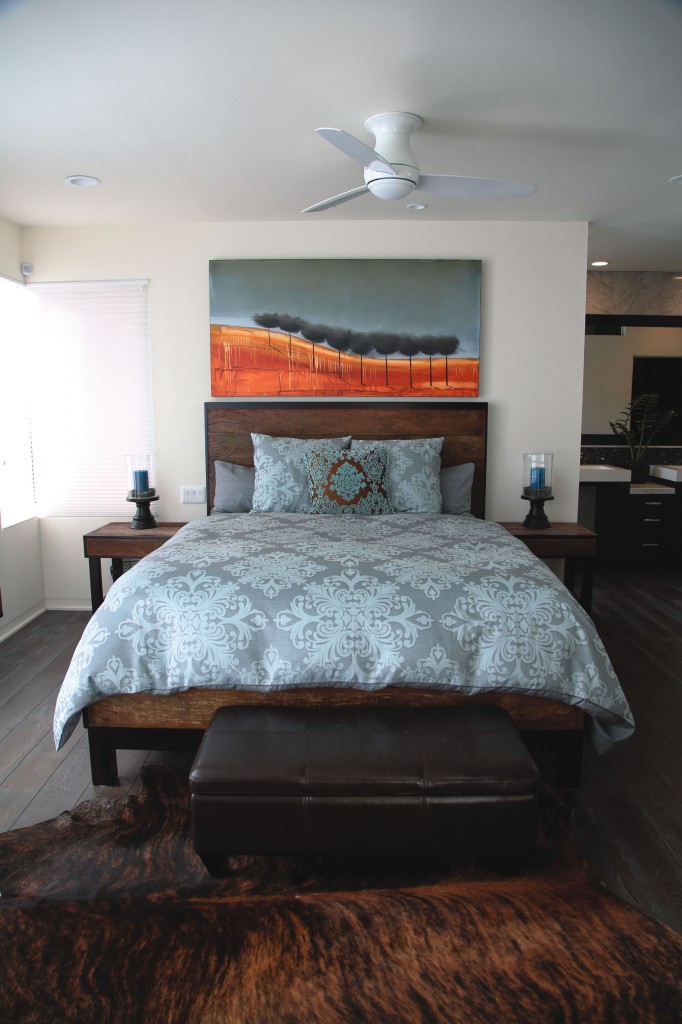 Jonathon agrees, and says he enjoys the diversity of the neighbors and their homes. “No two homes are the same in Allview Terrace,” he says. “And we have so many unique people with diverse backgrounds and experiences that make for a wonderfully eclectic neighborhood.” LBM 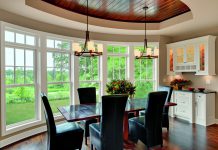 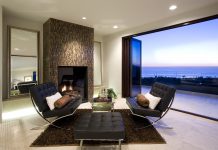 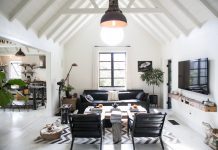