Three new murals around Laguna Beach depict what it means to live and create here on our sandy shores.

– By Marguerite A. Suozzi 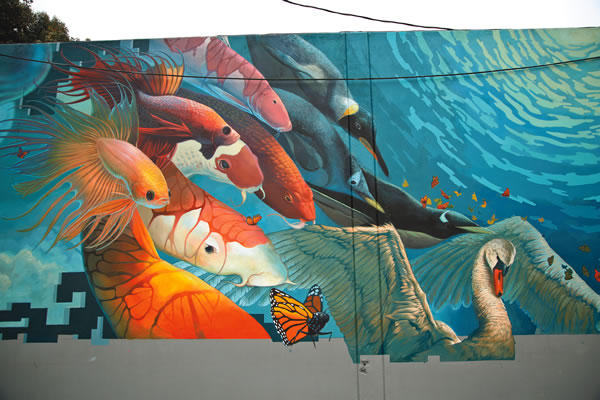 One would be hard-pressed to walk a block in Laguna Beach without encountering some sort of public art installation along the way, be it a discreetly embellished parking meter on Pacific Coast Highway or a painted ceramic tile bench outside the public library under the shade of a towering ficus tree. The city is home to all manners of sculpture as well, like “Chasing Butterflies” by De L’Esprie, marking the entrance to the Pavillions shopping center on North Coast Highway, and Ralph Tarzian’s “Canyon Spirits” on Laguna Canyon Road, dancing in front of the Seven-Degrees “idea lab.”

But perhaps most iconic among the pieces of public art decorating Laguna’s cityscape are its murals—from the titanic to the teensy—that herald local businesses, institutions and parks. Whether mosaics or paintings, sculptural walls or bas-reliefs, each individual mural with its unique style and sensibility, colors Laguna’s aesthetic and composes the city’s idiosyncratic cultural landscape. In so doing, this invaluable inventory of art for the public reveals some of the preoccupations and passions that characterize the headspace of this little self-determined, ocean-side artist colony. 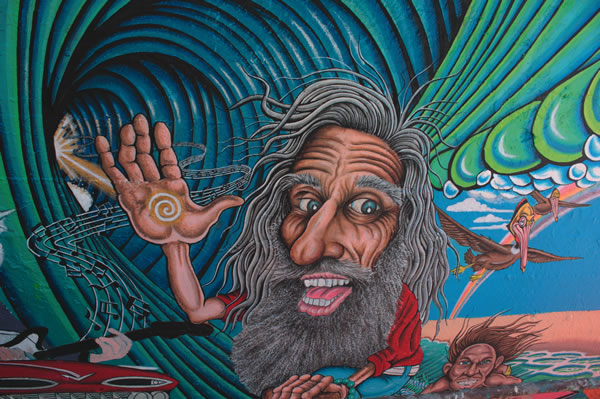 Wyland’s original, conservation-focused, “Whaling Wall” (redone in fire-glazed tile several years ago) outside his eponymous flagship gallery reminds viewers to protect and cherish our ocean heritage. Sandra Jones Campbell’s mural adorning the Rocky Mountain Chocolate Factory, entitled “Keep it Clean for the Next Generation,” pays homage to the dedicated, if not motley pilgrims of Main Beach, and with the piece’s title, urges us to protect our environment, and our future.

Laguna Beach High School (LBHS) has two sprawling murals of its own: a professionally commissioned piece donated by the class of 2009, “Breakers,” by Bridget Duffy, pictures a tsunami-like wave, crashing down through the columns on the wall facing the quad. The second piece, “Color,” created by a group of 11th and 12th graders for their production art final in spring, 2010, features waves, mountains, sun and sea monsters. “Every year, in our production art class, we try to have one larger project,” says Scott Wittkop, the teacher who oversaw the semester-long endeavor. “When the kids were doing it, it entailed a lot of school pride; they wanted to leave their mark and their ideas, and their artistic views,” he says. 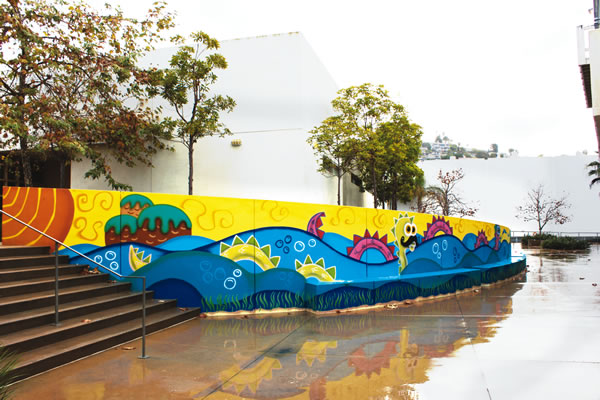 “Color” is quirky and bright, and downright colorful, and  while the concept, labor and message of the mural are completely student-driven, the class did receive crucial guidance from Jason Maloney, a muralist and art director at Hurley.

“[Hurley] is a big supporter of our program here,” Scott says. “When we started talking about the mural, they lent a hand, and the kids could see how this work is done outside the classroom. We want to bring some real-life experience to the kids’ life here, and companies like [Hurley] help us do that,” he says, adding: “We’re a city within big Orange County, but we’re a very small community and the community kind of takes care of itself.” 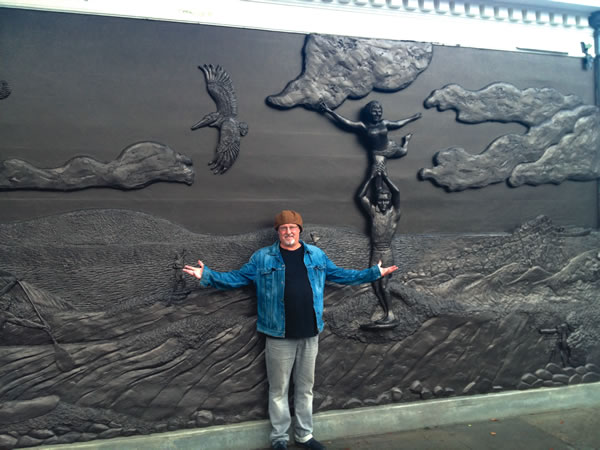 “I’m a storyteller,” says Randy Morgan, the artist and sculptor behind “The Waterman’s Wall,” the new sculptured mural on the Beach Street facade of Hobie Surf Shop, downtown on Forest Avenue. Dedicated to the citizens of Laguna Beach at its unveiling last December, the bronze bas-relief mural measures 40 by 11 feet, and honors the community’s proud waterman culture.

In the artist’s eye, the mural conjures the perfect beach day in Laguna: “That day after Labor Day when all the tourists have gone home, and we as Lagunans come out to celebrate and go to the beach,” he muses. “A little bit of offshore winds, and some Santa Anas blowing, and it’s still summer. The day before, millions of tourists were here, and then today it’s just us, with the pelicans flying, and the surfers gliding, and everybody just staring out,” he says. Indeed when the sun shimmers against Randy’s three-dimensional bronze relief, that perfect day he describes is brought to life.

Using images of local heroes, such as the late Dean Westgaard—former lifeguard and lifeguard supervisor; and legendary surfer and surfboard shaper Hobart “Hobie” Alter, to create each figure in the mural, Randy says the models in his piece are precisely that—models. “For each guy that’s in the mural, there are 1,000 guys that could have been in there that have traveled through Laguna,” he says. Each figure, representing so many other Lagunans and visitors, enabled Randy to tell the story of the city’s watermen through art.

Three years ago, as Randy drove down Beach Street, he noticed three architectural pillars framing the wall of the 1940s concrete building that surrounds Hobie Surf Shop. “To me it represented a blank canvas,” he says. “I wanted to tell the story of what the true waterman is, and of our ocean culture in Laguna.” Randy approached Mark Christy, the owner of the building and the store, about creating a mural.

To Mark, this sort of project seemed long overdue. “There really wasn’t any permanent recognition of the iconic watermen and women who helped establish Laguna as one of the birthplaces of modern beach and surf culture,” Mark says. “I had never met Randy, but was familiar with the smaller pieces he had done for my good friends Michael and Toni Leech in their restaurant, Cafe Zoolu, and when I met him, his passion was contagious.”

Clay Berryhill, executive producer for the project and its primary financial donor, says he felt a personal connection to the project as a native son of Laguna. “[The project] really resonated with me because growing up in this town, the ocean is really a big part of your life, whether you’re into the sand sports, like volleyball, or surfing or swimming or skim boarding—all the things that are represented on the mural. And I got that,” Clay says.

When the final product was finally unveiled, Randy says he and his supporters received overwhelmingly positive feedback with people saying things like, “It’s about us,” and “It’s about the people.” Perhaps most importantly: “It’s about Laguna,” he says.

Deeper in the canyon, work on another mural wrapped up recently. After the piece that formerly adorned the western wall of the Laguna Canyon Winery was painted over by winery owner Marlowe Huber, local instructor at Laguna College of Art & Design (LCAD) Mia Tavonatti went about planning for a new one. 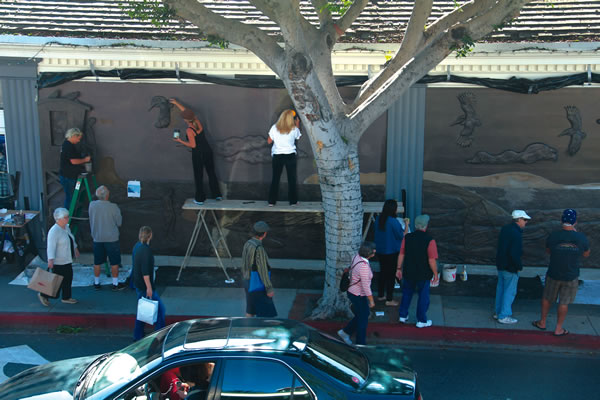 The previous mural, installed in 2003 by a group of LCAD students taking Mia’s class, was the largest piece to date that the Santa Ana-based artist had produced with the school. But instead of feeling discouraged by the destruction of the original artwork, Mia saw this tragedy as an opportunity to heal the winery wall with an even better mural, and her eighth oeuvre with LCAD. She also took this time to launch her Power of Words Project, a campaign that seeks to bring words to life through art.

But before her team could begin putting paint on the wall, the community needed to vote on a word that represented Laguna. After nominating about 50 words, “wonder” was announced the winner, at which point Mia put together a panel of six judges who voted on student designs that would serve as the blueprint for the future mural. The winning design entitled, “Wonder: An Odyssey” by Cheryl Kook, was then brought before the Laguna Beach Arts Commission, who unanimously approved the plans. From there, Mia and her students enlarged the drawing and prepared to put it on the wall.

“It’s not your typical Laguna Beach mural,” says Dillen Le, a recent graduate of LCAD who worked on the project during his final semester at the school. The piece pictures a young boy, being led out of a pixelated environment by a young girl, into a dazzling underwater world filled with vibrant plant and animal life. The pixels are meant to represent our daily two-dimensional technological lives, while the underwater world is the environment beyond our computers and cell phones that beckons us. 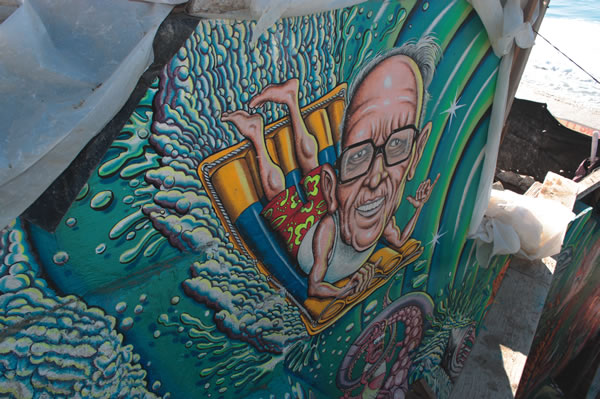 Back over on PCH at the Laguna Riviera Beach Resort, self-described surfer and dysfunctional artist Roy Gonzalez just finished his own psychedelic-acid-trip of a mural in January on the hotel’s sloped north wall, opposite North Reef. Originally from San Clemente, Roy cut his teeth doing commercial art for surf and skateboard companies, creating posters for music festivals and surf contests, and designing album artwork for everyone from Etta James to Jimmy Z and the ZTribe.

Roy was introduced to Kort Pearson, CEO and co-owner of the hotel through a mutual friend. Kort suggested Roy paint the north wall, complementing the hotel’s several existing murals by Loren Shaw Hellige, and that was that.

“[The wall] had been the canvas for a variety of folks over the years, but I felt Roy had the unique history, perspective and ability to do something truly in tune with the local surf culture, while at the same time paying tribute to some of our community members who are no longer with us,” Kort says.

Roy’s work at the Riviera is all Laguna: from the Garibaldi fish and moray eel in his undulating sea, to Laguna’s former greeter, Eiler Larsen, waving at viewers, welcoming them into Roy’s fantastical world. Meanwhile, Kort’s grandfather, Harry Willat, the original owner of the hotel, drops in on raft, as musician Joey Petrovich strums a guitar in his red El Camino, perched in a tube. This reference to Joey’s band, the El Caminos, like so many other inside jokes that inform this piece, are sure to give in-the-know locals giggles of nostalgia.

Roy describes working on this project as an honor: “I’m drawing people that I loved and respected on the wall, and drawing their friends,” he says enthusiastically. “I’m trying to inspire the California lifestyle and show how we were blessed to grow up with everything in the ocean. A lot of that is all gone now.”

For now at least, these memories are very much alive on the wall, along with so many others that inform the city’s public murals. Looking at them with the sun warming your back on the side of the road, or as damp sand scrunches between your toes, you won’t be able to help but think, “This is so Laguna.” LBM