Since opening its doors in July, Glennwood House has become a haven for adults with developmental disabilities.

By Peter A. Balaskas | Photos by Jody Tiongco 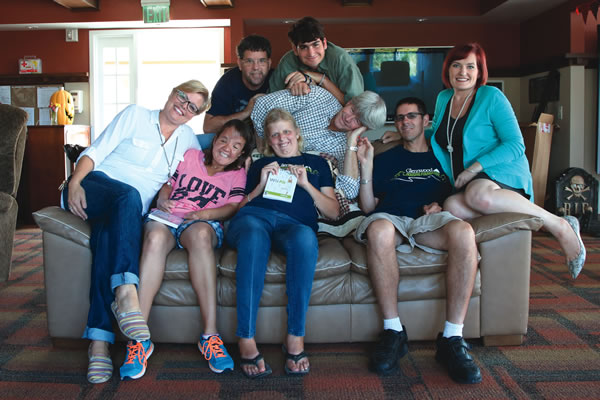 Happiness is audible at Glennwood House, where the sound of laughter flows through the tri-level building’s outdoor courtyard. The area is rife with growth: Budding fruit trees, potted plants and lush gardens line the outdoor space, along with fountains and gazebos. In fact, the property that hugs the corner of Pacific Coast Highway and Ruby Street celebrated a rebirth in July, when it made its public debut as Glennwood House, a residential facility for 50 adults with developmental disabilities and other special needs. Under the leadership of Laguna Niguel native Randy Larson, Glennwood House has shattered the paradigm of the traditional group home, effectively redefining the concept of the adult residential facility. The result is an ever-nurturing sanctuary firmly rooted in acceptance, support and community connection. 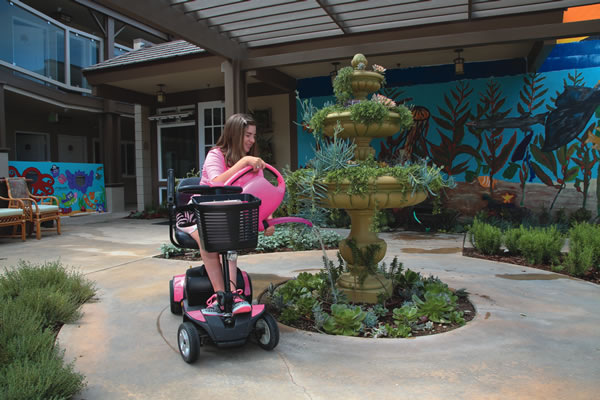 Glennwood House co-founder Randy Larson understands the pressures and concerns that accompany caring for a child with special needs: His 30-year-old son, Trevor, has Down syndrome. Randy’s experiences with Trevor inspired the financial planner and his wife, Ginny, to create The Lighthouse Group in 2003. The nonprofit organization, also known as Glennwood Housing Foundation Inc., provides educational, physical and emotional support to young adults with special needs through regular meetings, events and outings.

“[The Lighthouse Group] has social activities throughout the school year and summer camp,” Randy says. “But as [the kids] got to be 18, 19, 20 and adults … it was like, ‘We’re all getting older, what’s going to happen with our adults [after we’re gone]?’ ”

Randy’s realization led to the development of a singular vision, one he has sought to actualize since 2008: the creation of a unique residence where adults with developmental disabilities can come together to live and thrive. He imagined something more than a typical group home—a place where residents would have the opportunity to become increasingly independent through pursuing vocational employment, educational programs and leisure activities.

But before Randy could make his vision a reality, he was tasked with conquering several obstacles. An initial hurdle involved location; finding a city that not only would accept a facility that houses such a large number of special needs residents, but also promote a feeling of self-reliance among the residential community, posed a distinct challenge.

“[The Glennwood House board and I were] looking at these group homes up as far as Santa Barbara,” Randy says. “A vast majority [operate on the basis of], ‘Feed them. Send them to work. Bring them back. Shower. Watch a little TV.’ There’s no community, no activities. They can’t go down the block with their neighbors and friends.” According to Randy, San Juan Capistrano and Laguna Beach were the only local cities that truly embraced the group’s unconventional concept.

He discovered the facility’s current location at 2130 S. Coast Hwy.—formerly used as a seniors’ assisted living center—one day while driving along Laguna’s coast. Upon finding out the vacant property was for sale, he immediately called the realtors with an offer, resulting in Glennwood Foundation taking ownership of the 30,000-square-foot lot in 2010. 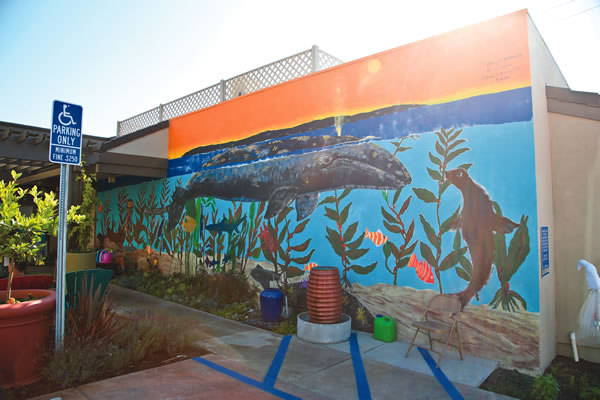 Once Randy had purchased the property, his next step was assembling a staff to help raise money and remodel the facility in a way that would reflect his desired aesthetic vision while providing the necessary accommodations for the home’s residents. Glennwood House Executive Director Shauna Bogert, who has worked in the areas of clinical psychology and developmental disabilities for 23 years, recalls how a small item in a local newspaper altered the course of her life.

“My mother was reading an article in the Laguna Beach Independent about Randy, and she said, ‘This is right up your alley,’ ” Shauna says. “So, I came down [to Glennwood House], he gave me the tour. … I said I would love to help out with the project … because this is exactly everything I ever wanted to do in a program.”

Shauna introduced Randy to colleague Stacey Enmeier, with whom she had worked at Project Independence, a Costa Mesa-based organization dedicated to promoting civil rights for people with developmental disabilities. Randy appointed Stacey the assistant director of Glennwood House, and the trio embarked upon securing 501(c)(3) nonprofit status for the growing organization.

“[Glennwood House] has been all done with private dollars,” Randy explains of the nonprofit’s financial development. “We’ve had some amazing families in town and corporations … that have just bought into the vision and the picture. They have supported us.” Notable donors include Montage Laguna Beach and the Elton John Charitable Fund, among others.

In addition to collecting private donations, the organization held a string of fundraisers—from art shows to benefit concerts—across Laguna every month for almost two years. At the same time, staff members screened more than 200 applicants to become residents at Glennwood House, including people with cerebral palsy, Williams and Down syndromes, autism, brain traumas and more.

“Word had spread through families—no advertisement, other than our website,” Stacey says. “No marketing, other than us doing Laguna events to help Laguna [residents], so they could have us into their community. … They have been wonderful.”

Once sufficient funds had been raised to offset the costs of renovations, and residents and staff members all had undergone background checks, Glennwood House officially opened its doors in July 2013. 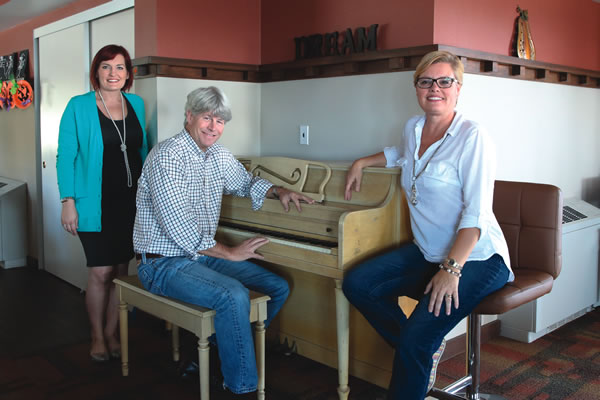 If there’s one thing that Kellie Stock wants for her 25-year-old daughter, Jewelz, who has Down syndrome, it’s to have her live in a place whose environment resembles a second home. “We looked at several [other places], and they weren’t good fits because … you’d walk into these places, and you didn’t have this huge family,” she explains. “[Glennwood House] is a safe place, a happy place, and knowing that Jewelz is here … helps [my husband and I] out. That’s comforting for us.”

What impresses Kellie most is Glennwood House’s mission to help its residents interact with the local community through vocational work. Every morning, Glennwood House residents ages 22 and older travel to off-site jobs; Jewelz, for instance, works as a bagger at a nearby Albertsons supermarket. Residents younger than 22 either participate in an adult transitional program or attend college classes at schools like Saddleback College. “We want them to be independent,” Shauna explains of the initiatives. “We want them to be ready to go [and come back] at any time.”

It’s this same sense of individual responsibility that the staff emphasizes through the overall developmental paradigm embraced at Glennwood House. In addition to vocational and educational programs, Glennwood House presents a range of activities, including art classes; yoga; financial and money management sessions; guided walks and tours; movie, karaoke and dance nights; and the option to participate in the Special Olympics. Most importantly, residents are given the autonomy to choose these activities themselves during regular resident council meetings.

“The residents meet, and we are asked to be there,” Stacey explains of the meetings. “It is their meeting. We are invited. We ask, ‘Would you like one of us to be there?’… It’s ‘residents first.’ It’s what they want to do.” 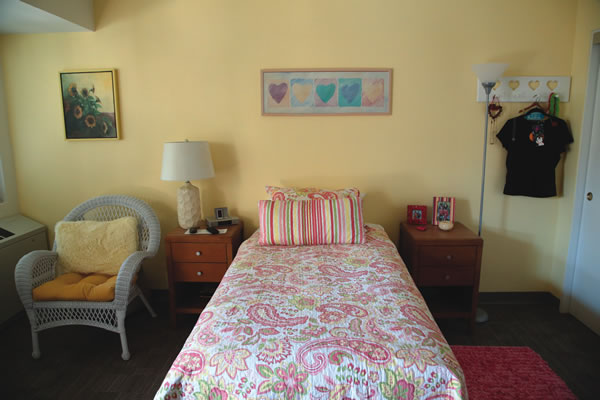 A sense of familial coziness is invoked by the center’s exquisite design by local firm Morris Skenderian & Associates, as well as decorative touches added by the staff, residents and volunteers. One such volunteer, Laguna artist and environmentalist Wyland, painted a mural of a whale on the wall outside of the dining room and kitchen; the residents and staff later completed the work by adding their own renditions of marine creatures to the underwater scene.

Dominating the outdoor courtyard is a sustainable serenity garden, where a variety of young trees and plants produce lemons, limes, oranges, apples, grape vines and other types of succulent fruit. Also present are water fountains, two spacious gazebos and a number of seating areas for residents to sit, gather and talk. The second floor includes two sun decks where residents can watch the sun set over the Laguna landscape or take yoga classes.

Other rooms on “the campus,” as the staff calls it, include a gym, a laundry room and a recreation space. Meanwhile, an expansive activity lounge features a piano, a fireplace, a flat-screen plasma TV for movie nights, a Wii gaming system—which allows residents in wheelchairs to increase their upper-body strength—and an art studio stocked with supplies. 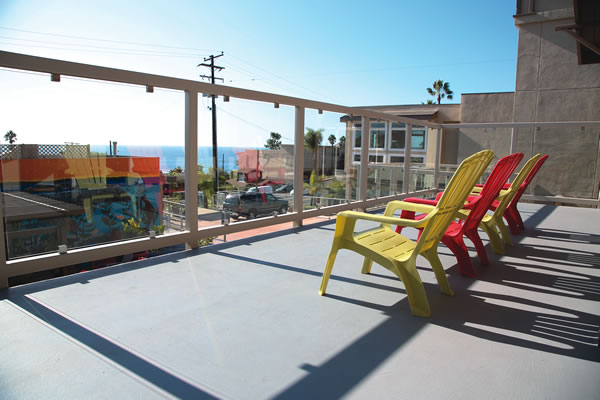 The staff is extremely enthusiastic about Glennwood House’s future. Moving forward, Shauna would like to focus on having residents become more involved in the Laguna community, potentially by volunteering with local animal shelters, Friendship Shelter, the Assistance League and other charitable organizations. She and Stacey also want to enter their most creative residents in the 2014 Sawdust Art Festival.

“I think for Laguna [residents], it’s such a great opportunity … because they are all about diversity, acceptance and community,” Shauna says. “And [Glennwood House] incorporates that into one place.”

With a view toward expansion, Randy someday hopes to open a second Glennwood House as well as collaborate with other groups that might be interested in reproducing his innovative model. “The vision is to help others if they want to replicate this, since the high bar is [now] set,” he explains. “Create a starter kit and forward that to them. And stress due diligence, and ask yourselves if this going to work in your state and community.”

He emphasizes that no matter where an adult care facility is located, two components are essential for the growth and evolution of its residents: hope and love. “The need is huge; the families need that relationship, the care, the peace of mind,” he says. “With great staff, great families and the right selection, I do—with all my heart—believe … in the larger adult residential facility as a community within the community … beyond the group home.” LBM