A quintessential village avenue in Laguna Beach, Oak Street stretches from Temple Terrace to the ocean—and for one night each year, it becomes the busiest street in town. 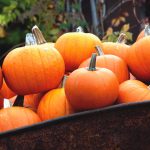 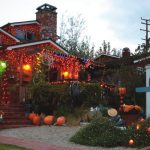 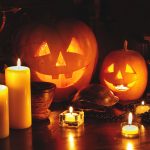 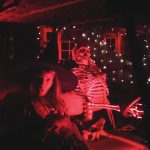 Though primarily known for its raucous annual Halloween celebration, Oak Street also offers sweeping views of the Laguna Beach landscape and an assortment of homeowners whose friendliness is unparalleled. Quaint cottages, fronted by picturesque gardens teeming with butterflies and bees, line both sides of this coastal thoroughfare. It’s calm and serene, but not an inch too far from vibrant downtown Laguna.

“There’s a real community feel here, and we can walk to restaurants and shopping,” says Oak Street resident Gary Greene. “It’s the best of both worlds.”

Neighbor Lyn Schucking agrees, adding, “Natural landscape and wildlife abound, yet cultural activities are close by. It’s a gift to have the two equally balanced.”

As the residents of Oak Street toast yet another year with haunted houses, elaborate costumes and an abundance of all things sweet, three homeowners share their impressions and memories of one of Laguna’s most iconic neighborhoods. 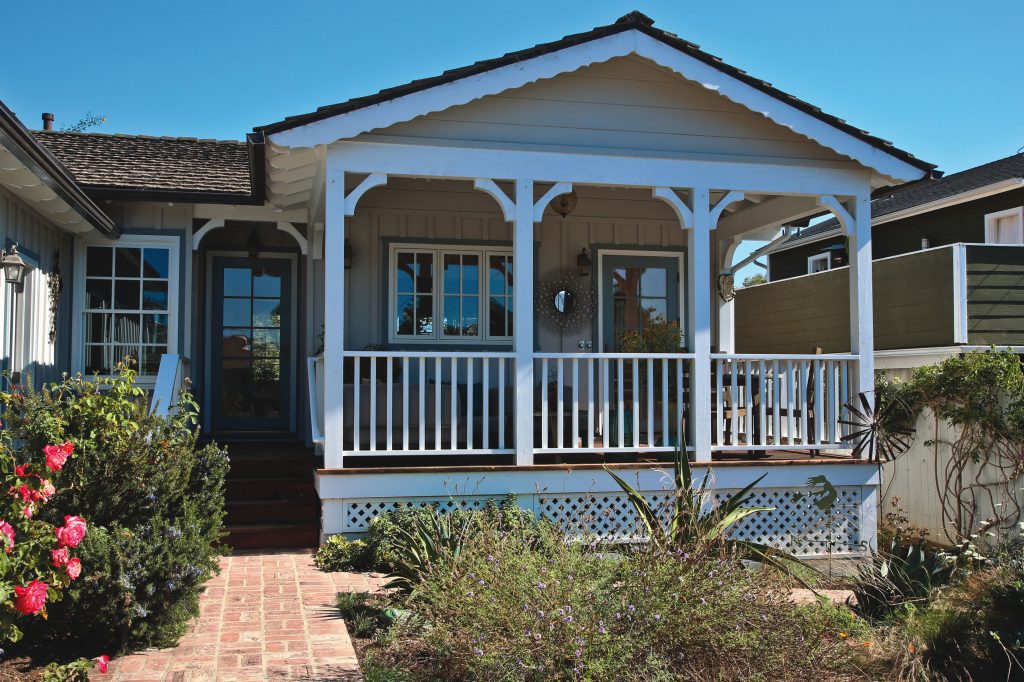 Ivor and Lyn Schucking purchased their 1940s ranch home on an impulse in 2000. “We were driving up and down the streets of Laguna looking for the right place, saw an ‘open house’ sign, walked in the door and within 60 seconds,  Ivor announced, ‘We’re buying this house,’ ” Lyn says. Though it was the home’s light that first enchanted them, its compact size proved perfect for a family accustomed to constant relocation as a result of Ivor’s work. 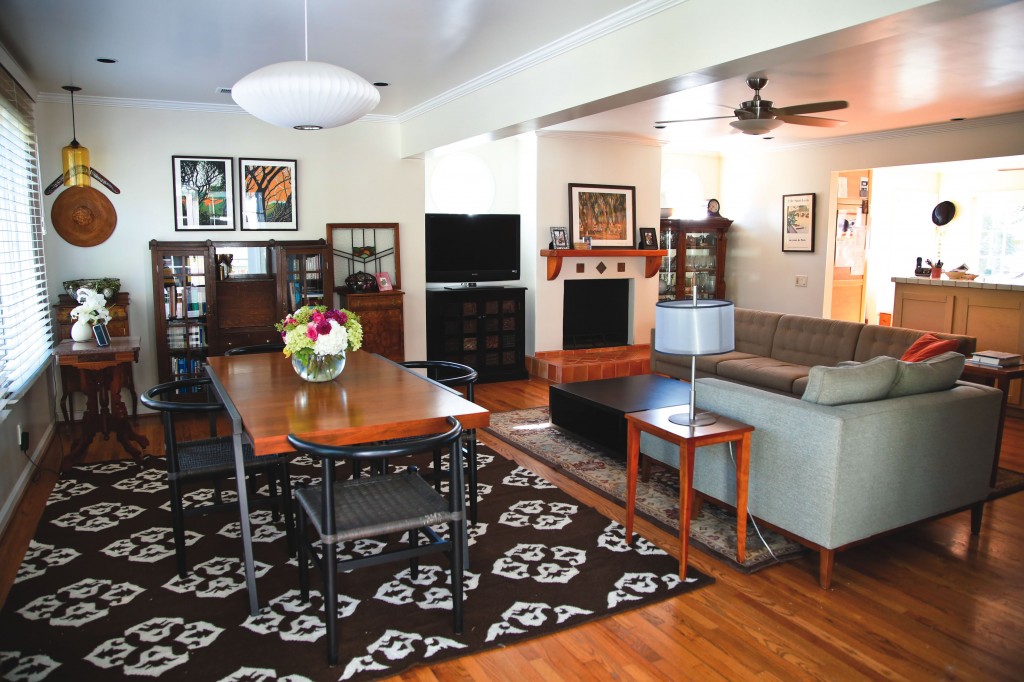 Lyn furnished the rooms with mid-century modern pieces, complemented by heirloom antiques that have been in her family for generations. The home’s front door leads into an open-plan space that incorporates the family’s kitchen, as well as its living and dining rooms. The master bedroom features an adjacent sitting area, which plays frequent host to those who seek to curl up with a book. 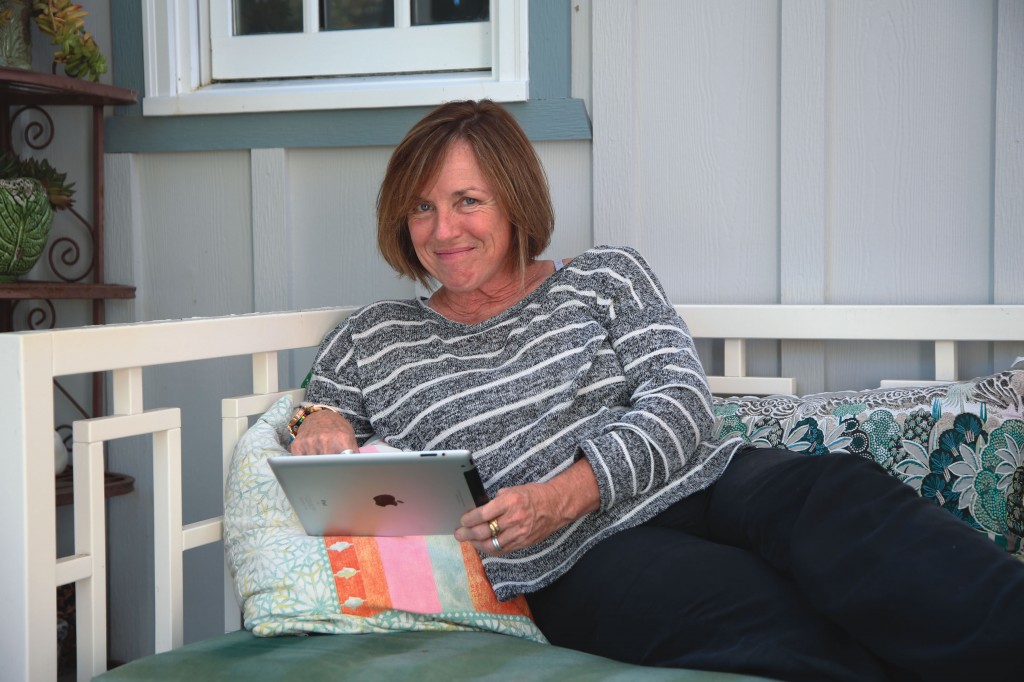 The Schuckings transformed a spare bedroom into a home office, which overlooks the front porch and yard, and affords slight ocean views through a Dutch door. Son Noah’s “man cave” offers a prime spot for the 15-year-old to relax with friends. “His bedroom is small, so this is where he spends most of his time,” Lyn says of the recreational space. 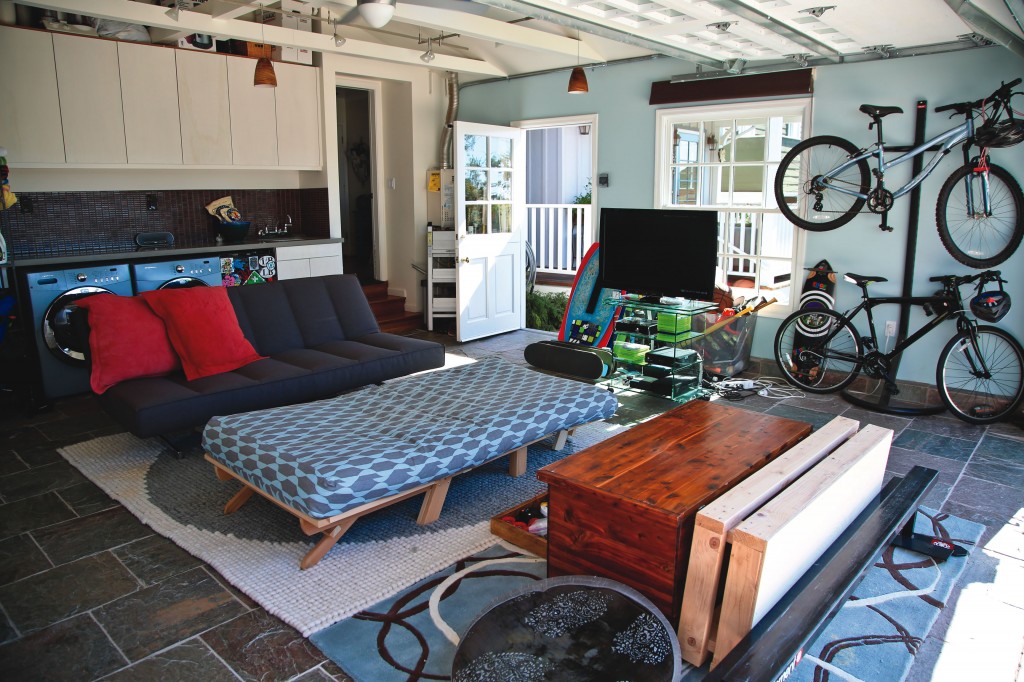 And as for Halloween? The Schuckings downright love it, and they savor the experience of celebrating the holiday from Oak Street’s peak. Lyn recalls neighbors advising the family to stock a surplus of candy for the evening, and though the Schuckings heeded the warnings, she admits the family ran out of sweets before the night’s end. Now, the Schuckings can’t resist the allure of a Halloween spent on Oak Street. Lyn adds of the holiday, “We lived in Germany for five years, and always came back for Halloween every year. It’s a great tradition.” 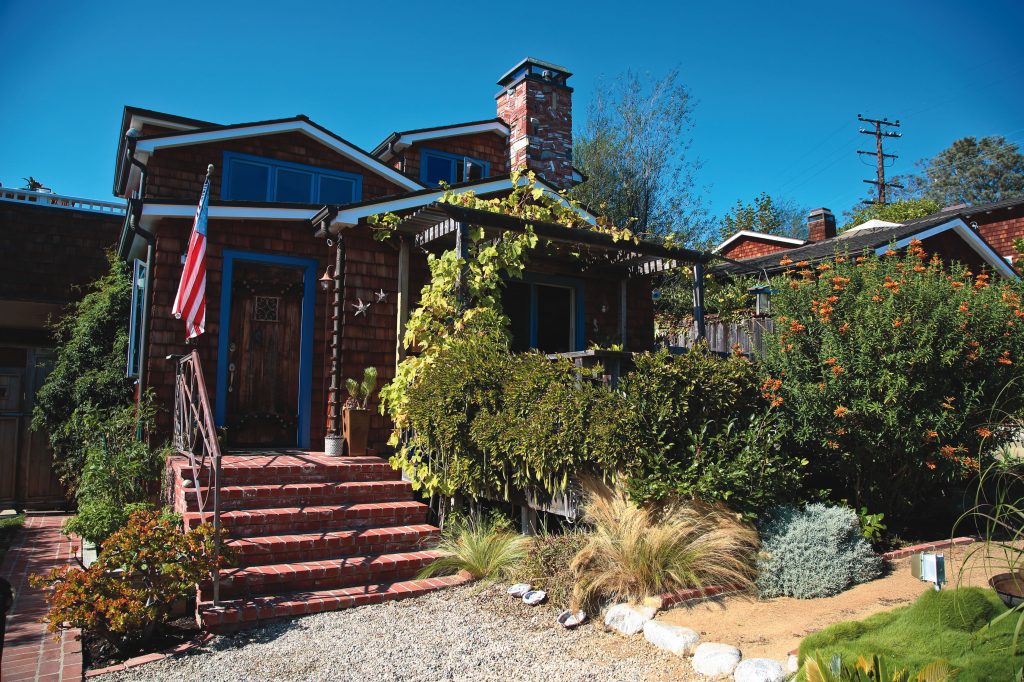 Jeff and Gina Nixon’s 1931 cottage mirrors an illustration from a children’s fairy tale. A citrus orchard in front of the house, shingled walls and a brick chimney add whimsical touches to the property.

“When we bought the house in 1998 it had been through a lot of previous owners and wasn’t in good repair,” Jeff explains. But after living in the one-bedroom, one-bathroom home for five years, they enlisted the help of Laguna Beach architect Carl Iverson to help them with renovations. “It was a great experience working with Carl and everyone on the project,” he adds. “They did a great job.” 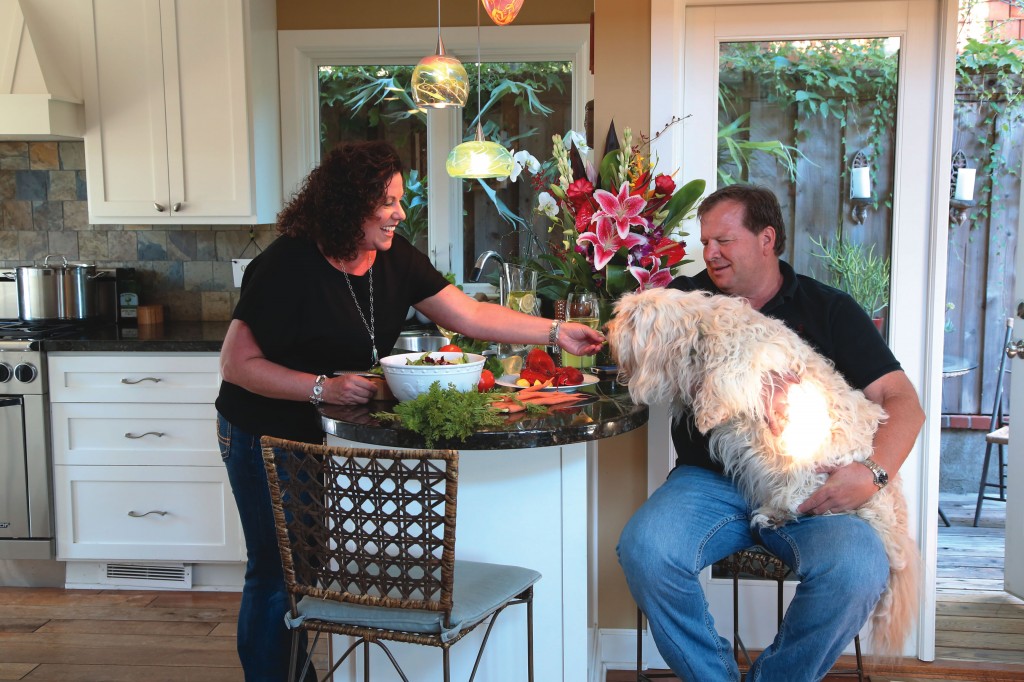 Though restored from the ground up, the cottage retains its original charm. Its design seeks to enhance its compact interior by capitalizing on an open-plan living and kitchen space. Upstairs, a master retreat comes complete with a rooftop deck that captures the Laguna breeze. 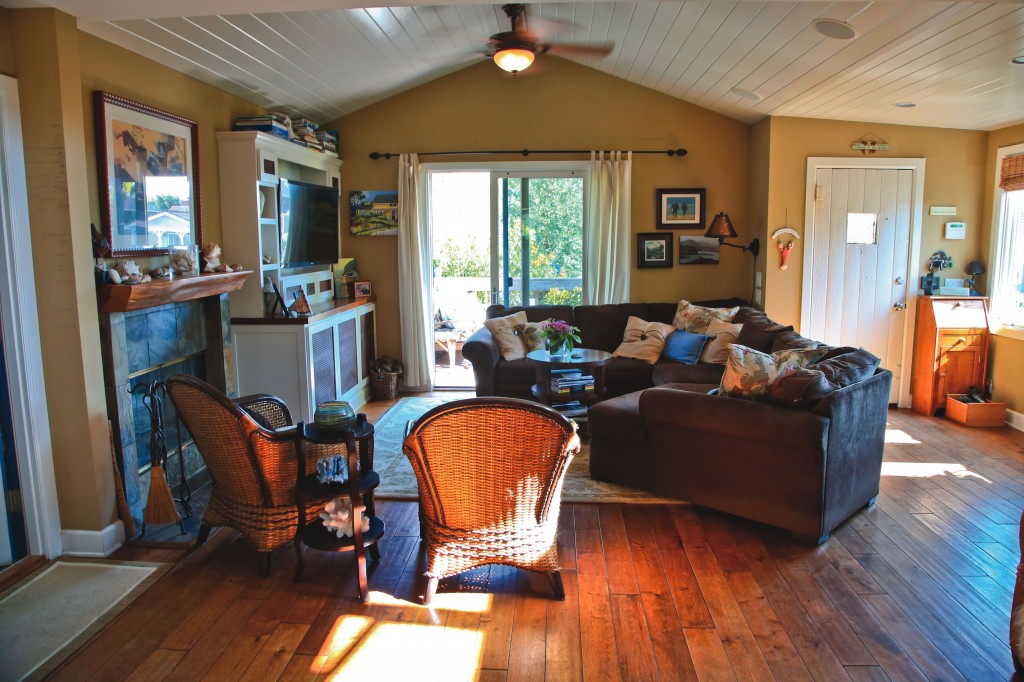 Inside, decor subtly accents the coastal dwelling. American black walnut planking and a neutral color palette mimic the natural landscape. Meanwhile, the Nixons commissioned a local artist to design and etch green glass screens in an underwater scene for the master shower.

A mason created the home’s classic brick chimney from scratch using materials selected by Jeff. “The original chimney was falling apart and had to be rebuilt,” he explains. “I collected around 1,500 old bricks from all over Laguna Beach, and the mason used some of them to create the new chimney, along with abalone shells I dived for in Mendocino [in Northern California].” 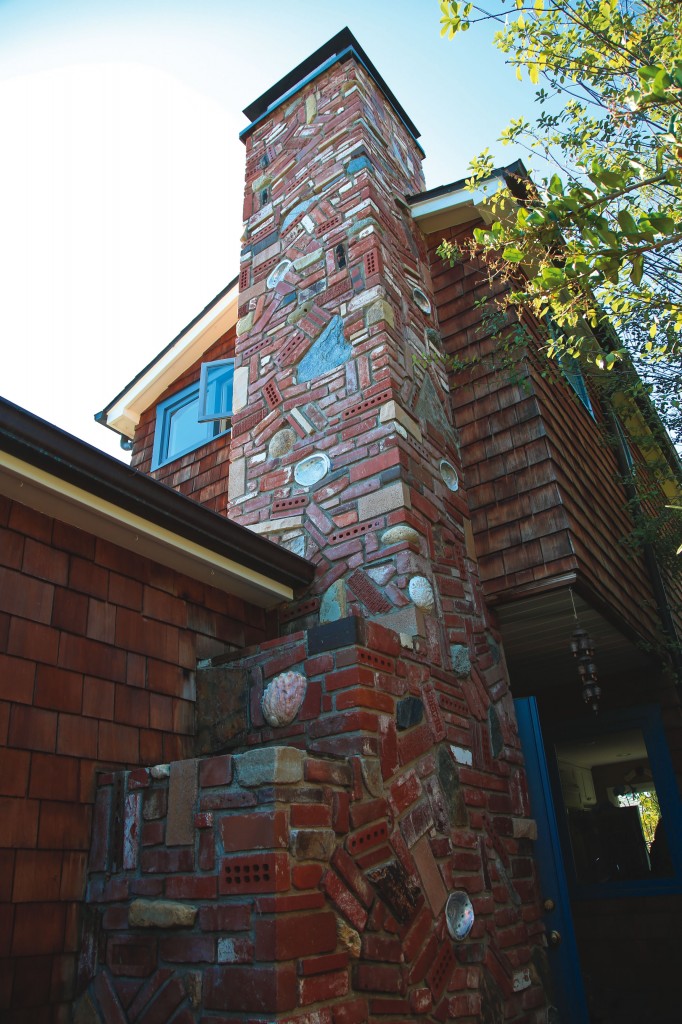 “We put a table out front and hand out around 2,200 pieces of candy during the evening,” Jeff says of the Nixons’ contribution to Oak Street’s annual Halloween extravaganza. He notes that locals from other parts of Laguna help out by dropping off extra bags of candy for residents to use; this unique sense of camaraderie is just one of the things the Nixons love about where they live.

Jeff adds, “The relaxed lifestyle, spending time with neighbors and the sense of community; it’s just a great vibe.” 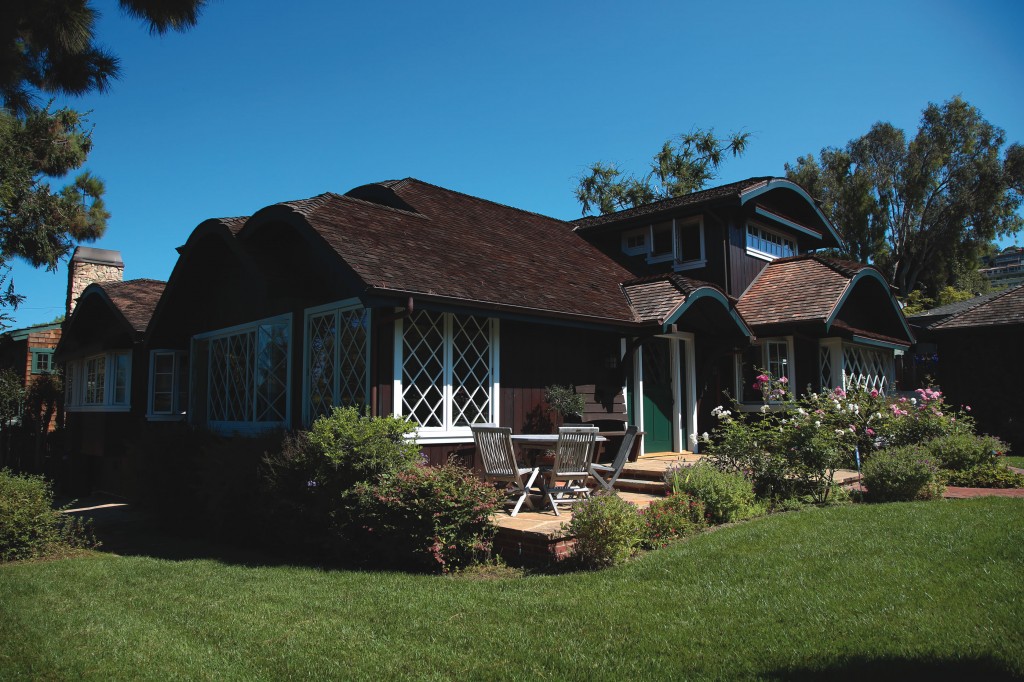 Gary and Linda Greene take pride in their gabled bungalow. “I bought the home with my late wife in 1983, and it hadn’t changed much since 1927,” Gary explains. After his wife passed away in 2004, Gary met and married Linda, and the couple decided to embark upon a complete remodel of the historic property.

In 2009, they hired Laguna architect Gregg Abel, of Gregg Abel Design & Construction, to oversee the renovation. “We kept as many of the original materials as we could, including the wood paneling in the great room, which was removed, sanded, stained and replaced,” Gary says. Original diamond-paned windows remain in the home’s eat-in kitchen and dining room. All other windows were painstakingly replicated from those designs. 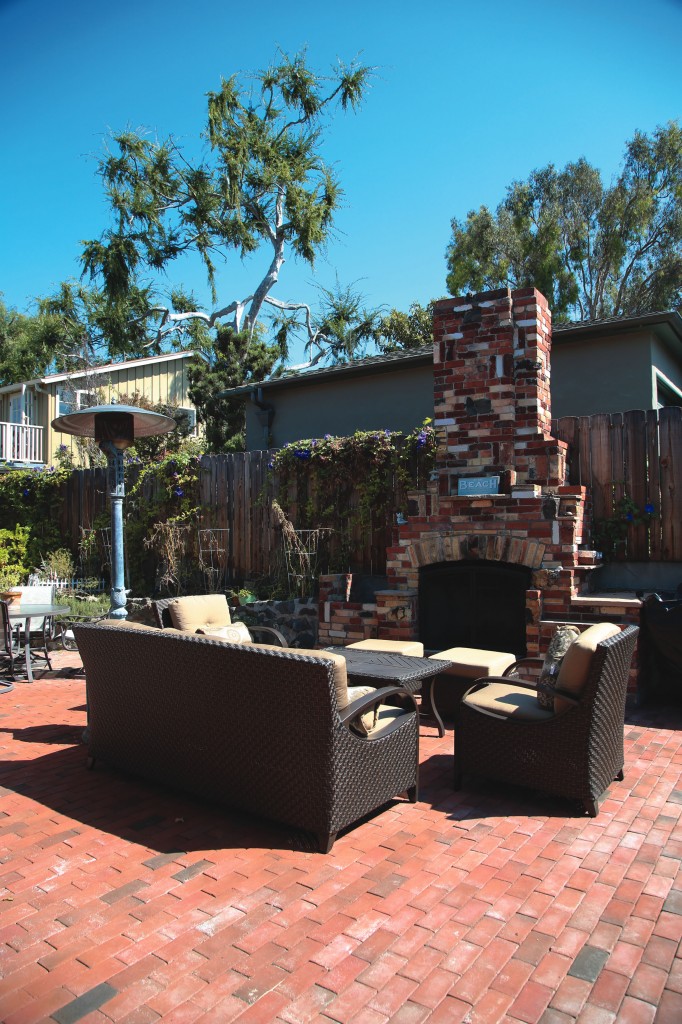 When planning the interior, Gary and Linda perused interior design books on craftsman- and bungalow-style homes and stayed true to the style of the era, adding flush-mounted cabinets and metal pulls in the kitchen, and beaded boarding on the walls. 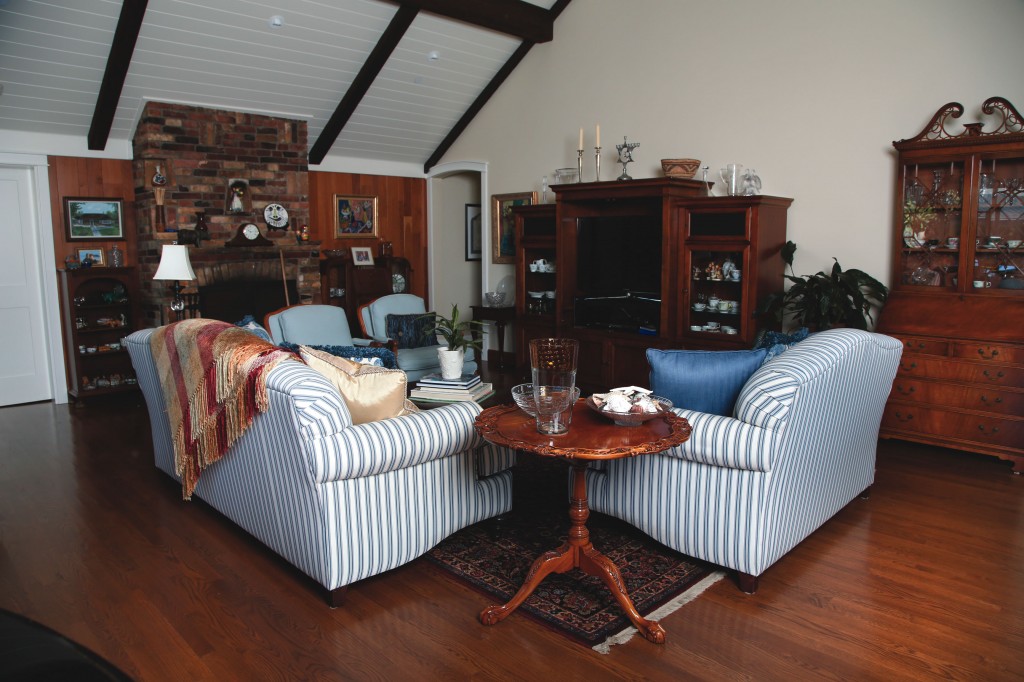 Outside, a trimmed hedge and an arbor enclose the front yard. A custom-built enclosure with foliage, rocks and sleeping quarters houses a surprisingly sprightly foursome of desert tortoises and box turtles. 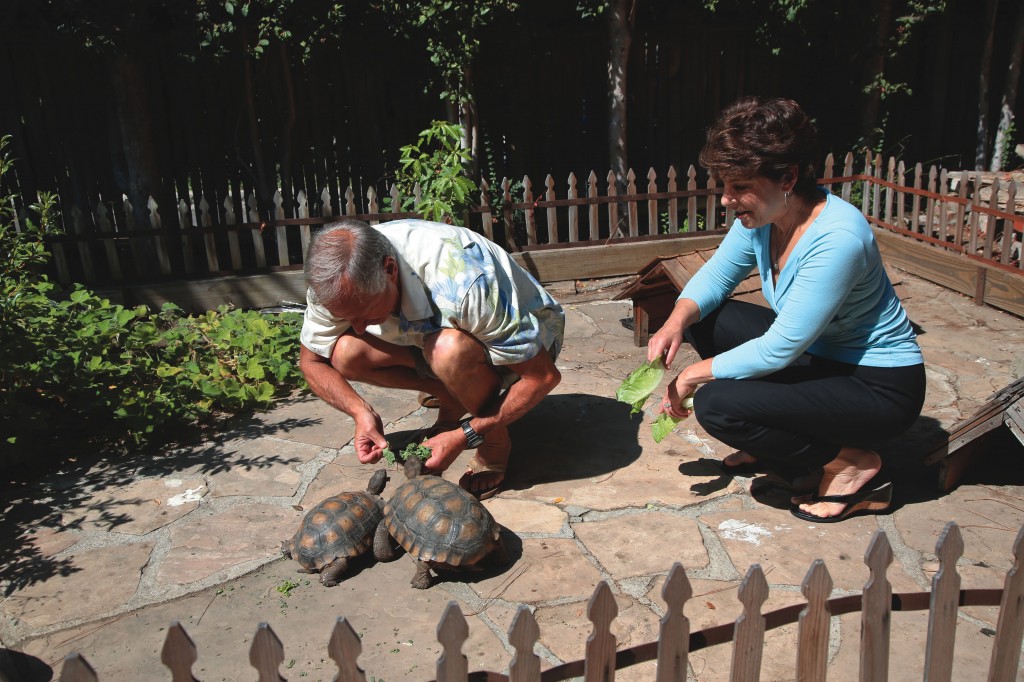 A veteran resident of the neighborhood, Gary has fond memories of Halloweens spent on Oak Street. “My late wife was raised Christian—I was Jewish—and the kids always wanted to put up Christmas lights. To compromise, I said I’d give them lights at Halloween and decorate the house.” Keeping that promise, Gary transformed the home, decorating the front yard with an array of freaky figures and perhaps unknowingly contributing to Oak Street’s birth as Halloween’s headquarters.

The Greenes agree that Oak Street is one of Laguna’s friendliest neighborhoods, especially during trick-or-treating. As Gary explains, “There are people who’ve been here a long time, as well as newcomers, and that’s what keeps the neighborhood vibrant.” 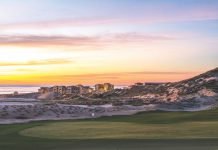 The Pacific Side of Los Cabos