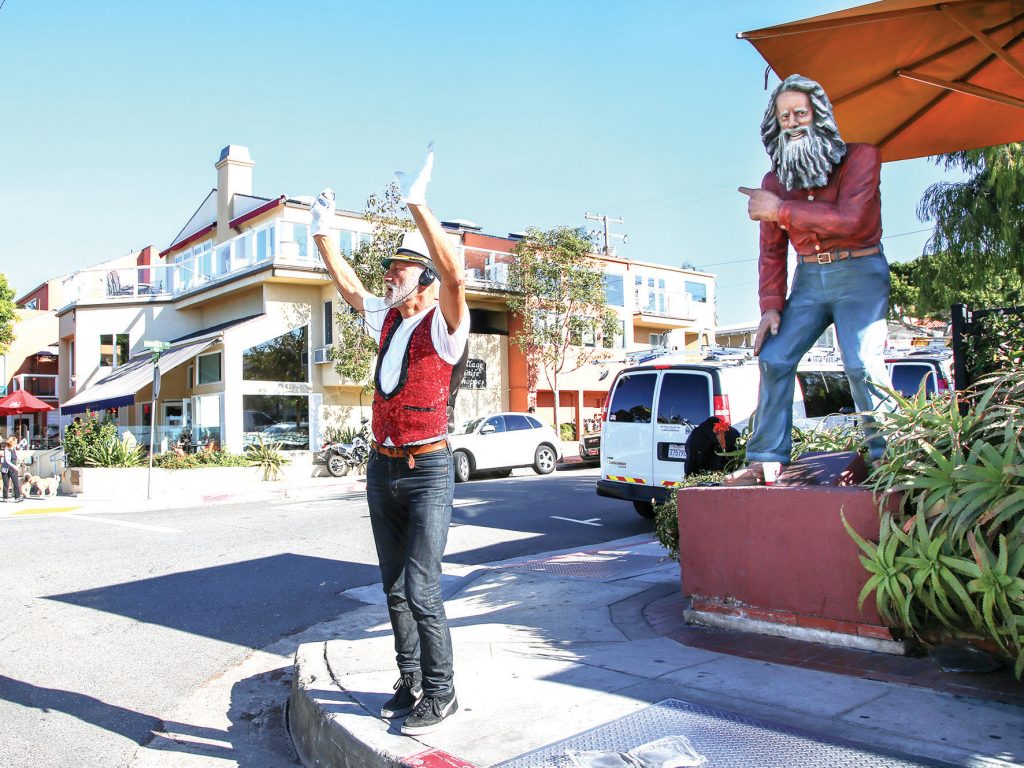 This March marks the 125th birthday of Laguna Beach’s official greeter.  Here’s a look back at his legacy and others who have welcomed so many to our town.

Every morning at 7, a man appears on the corner of Brooks Street and Coast Highway. Like clockwork, he’ll hang his bright red coat on the outstretched finger of the larger-than-life colorful statue, allowing his red and black sequined vest to glisten in the morning sunlight while he tunes his AM/FM radio to Energy 103.7. As cars whiz by, his dance moves settle somewhere between the King ofPop and the robot as he begins waving his gloved hand joyfully. The performer—Michael Minutoli—isn’t looking for much more than a smile and a wave in return.

This sight is a welcome tradition started decades ago by a drifter who settled in Laguna and couldn’t help but greet visitors to the town he so cherished. And Michael, arguably the modern-day incarnation, rationalizes why.

“[I have a] passion for this city,” he explains. “My mother told me you can’t love something unless it has a heart, but I adore this community that we live in, and I never want to leave.”

There are a handful of men who are widely recognized as Laguna Beach greeters, but the city has officially christened just one: the incomparable Eiler Larsen, who would have celebrated his 125th birthday this year, on March 27.

It all started when a shipwrecked Joe Lucas swam to Laguna’s shore in the 1880s. With a trident in hand, a mouth fit for a sailor and a heart full of cheer, legend has it that Old Joe—as he was most fondly known—became the first to proudly stand on Main Beach welcoming newcomers. Greeting stagecoaches became his hobby and, as the story goes, the town and its visitors grew accustomed to the Portuguese fisherman’s broken English and offhand remarks. The community even offered a daily $8 stipend to support Old Joe until his death in 1908, according to Laguna Beach Historical Society archives.

Around the same time, a young Danish man named Eiler Larsen began making his way to the United States. “He had the feeling of wanderlust,” says Laguna Beach Historical Society President Gregg DeNicola of Eiler’s youthful travels, which reportedly took him from Denmark to Siberia to South America and eventually the U.S.

Eiler even fought for the U.S. in World War I, but his courage led to a leg injury and an honorable discharge back to the States. “Rumor has it, with a few pennies and his thumb, he made it [from Washington, D.C.] to California,” finding work in the San Joaquin Valley fields, Gregg shares.

Shortly thereafter, Eiler headed north to San Francisco, which is where he heard news of the Pageant of the Masters.“The easiest way to see the pageant—because [Eiler,] again, really had no money—was to be in it,” Gregg explains. “He volunteered to be in one of the pieces, and he was [cast as] Judas in ‘The Last Supper.’ ”

Eiler spent two more years commuting to his role as Judas, and ultimately moved to Laguna Beach in 1942. Since Laguna was constantly swarming with new faces, Eiler began greeting them in the mid-1940s. And if Eiler wasn’t at his post—now known as the historic Greeters Corner at Forest Avenue and Coast Highway—it was common to see him doing odd jobs around town.

On Feb. 14, 1964, Mayor William Martin declared Eiler Laguna’s official greeter, an unpaid position he held until he died in March 1975.

All things considered, anyone assuming the title after Eiler had very bold sandals to fill—literally, as he was known for pairing sandals with iconic red pants and bright plaid flannels. Attempts were made, though, and a very compelling one came from No. 1 Unnamed Archer, better known around town just as Archer. Beginning in the early 1980s, he spent nearly 25 years greeting from Ocean Avenue, where his go-to call was, “You’re perfect.” Archer served as a beloved reminder of the greeter culture until his death in 2009.

Then came Michael: Much like Eiler, he traveled from the East Coast to the West, chasing his dreams. Up until this point, local greeters sported long, straggly beards; Michael proves to be the most clean-cut so far, with a fearless personal style and personality, to boot. If you ask anyone around town, they’ll attest to his infectious charm. After suggestions from people in the community, he took on greeting and it soon evolved into a daily routine by June 2011.

“I don’t take it as a job, but I look at it as a responsibility,” Michael says. “[I like] to get there before that certain group of people go to work or school. I really strive for that.”

Each day begins the same for Michael: The 55-year-old says he rises with the sun, explaining that he’s homeless by choice—irresponsible, but happy. After biking to Starbucks for a brief social stop, he pops into the White House to grab a bite to eat and say hello to owner George Catsouras. By 7 a.m., Michael makes one last stop at Heidelberg Café & Bistro for a warm cup of coffee before taking his post directly under the greeter statue on Brooks Street. Michael then throws all caution to the wind for the next three hours as he entertains the morning commuters. Occasionally, he says he returns in the evening to greet late-night visitors and “give them something to talk about on their way in,” mainly because he admits spreading this joy is where he feels most comfortable.

“It’s really not important [how many people wave back],” Michael says. “The main thing is as long as I make sure they see me wave to them. It’s … overwhelming what a smile and a wave will do for somebody.”

Many businesses and community members around town have taken the greeter culture to heart. Keep your eye out for these products and places honoring this piece of Laguna’s history.

“THE GREETER”: Elestial Productions has developed a documentary about greeters past and present, recently entering it for consideration in April’s Newport Beach Film Festival. On March 27, Eiler’s 125th birthday, the crew will be handing out birthday cake at Main Beach beginning at noon.

THE GREETER’S CORNER RESTAURANT: At the corner of Forest Avenue and Coast Highway—the historic spot where Eiler spent many of his days—a restaurant takes its name from Laguna’s famed drifter. His footprints, along with the statue, commemorate the corner’s claim to fame.

GREETERS STATUES: Two statues on Coast Highway commemorate Eiler Larsen: a painted cement casting at the contemporary Greeters Corner at Brooks Street by Charles Beauvais, as well as a redwood carving by Guy Angelo Wilson outside The Greeters Corner Restaurant. 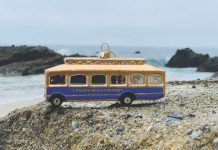