When Liliana Burgi woke up on May 7, 2013, she knew two important things were happening that day. One, she was adding a charitable component to the business model of her growing shoe company, Salt. And two, she was joining her husband, actor Richard Burgi, at an awards ceremony for an organization he supported, the National Center for Missing & Exploited Children (NCMEC). What she didn’t know was it would also be the same day that three women would be rescued from a man’s house in Cleveland after about 10 years in captivity—a victory that would be celebrated that evening.

“That night was so important to me. That’s when I knew I wanted to be part of NCMEC,” says the Laguna Beach resident, who now donates a portion of her company’s sales to the nonprofit.

The idea of using fashion, specifically women’s apparel and accessories, for the greater good is at the heart of charitable efforts for many Orange County businesses. It’s part of a national movement demonstrated by the popular “buy one, give one” approach used by brands like Toms and Warby Parker. Buy one item, they say, and a life could be changed for the better—it combines retail therapy with altruistic intent.

And in a town like Laguna, where there are dozens of clothing and accessory boutiques as well as an estimated 230 nonprofits at any given time, according to the Laguna Beach Community Foundation, it’s no wonder these models flourish. In addition to fashion-forward residents with businesses such as Salt, which donate a portion of proceeds to charitable causes, there are many more boutiques around the city with stylish products that allow customers to shop while supporting the greater good.

Liliana says that Salt started because she noticed a missing link between comfortable and sexy heels. To remedy this, she designed heels and wedges with wood bases, foam insoles and interchangeable cloth straps. As business grew, she was able to provide 10 percent of each sale to NCMEC.

Though Salt is an online-based company, there are also plenty of physical stores in Laguna where you can purchase fashionable products that give back. Taking care of communities and groups you love is also the idea behind the success of Don and Summer Meek’s The Soul Project, which has a flagship shop on South Coast Highway.

The company uses local artists to design T-shirts based on a “soul place,” which the couple describes as a location that holds special spot in someone’s heart. Then, Summer and Don donate $1 from each sale to a designated children’s or environmental charity in that particular location.

“Additionally, we create designs (in-house) for our retail store that are not associated to a specific soul place; … in that case, we donate the $1 to different charities,” Summer says. “For this summer (May through September), we [chose] the Pacific Marine Mammal Center as our charity.” This is the first time the company designated a specific charity for the retail store’s Soul Project-branded items. In the past, the proceeds were divided and dispersed equally amongst charities the couple already supported.

“As a community, Laguna Beach has been really supportive of what we’re trying to achieve at The Soul Project,” Summer adds. “It’s also what’s helped with the success of the store.”

This idea of identifying impact before choosing goods is echoed by the recently revamped mission of The T-Shirt Co. at Laguna Beach, which co-owner Lauren Segal now calls a “T-shirt shop with a conscience.”

“My goal is that half the products in the store will have some social benefit [by summer of next year],” Lauren says. “That way it leaves [the options] open—if it’s a one-man show or an eco-friendly product or even a product associated with a nonprofit, they can all benefit from us.”

Lauren explains that it’s the small efforts that matter. For example, switching her merchant services over to Process Green, which allots a portion of the store’s revenue to a nonprofit of its choice (it’s currently going to Lauren’s nonprofit, Give a Beat). Although The T-Shirt Co. may not benefit solely local efforts, Lauren says the option will be present. She is currently working with the Friendship Shelter to design a bag that the residents can sew; in turn, she can sell the product in the store and return the proceeds to the shelter in support of its rehabilitation programs for homeless adults.

If you’re looking for specific accessories, two other well-known Orange County brands are easy to find around town—31 Bits and Sea Candy Jewelry.

Keeping it local, Sea Candy Jewelry sources sea glass from Laguna’s beaches to create pieces that reflect the ocean as well as help protect it. Avid sea glass collectors, co-owners Sean Malek and Olivia Oddo began to notice more trash accumulating at the coast every time they ventured out. As a result, Sea Glass Jewelry was born as a way to repurpose sea glass (which is, ironically, trash itself) into one-of-a-kind jewelry that can be purchased at Taim Boutique, Twig and online.

Twenty percent of proceeds from sales of two products, a necklace and a bracelet, goes directly to the Surfrider Foundation, an organization dedicated to protecting the world’s beaches, waves and oceans.

“Being a skimboarder and spending a lot of my time down [at Aliso and Tenth Street beaches], I see how the beach changes and the effect the population really has on it,” Sean explains, adding that he plans to partner with Victoria Skimboards (his sponsor) to host beach cleanups. “It’s really disappointing in the summer—there [are] so many people, and there’s a disregard for picking up trash. … Surfrider [Foundation’s] efforts really inspired me to help out more rather than just be disappointed in people.”

Founders of another Orange County jewelry company were similarly inspired after meeting local women struggling to provide for their families in Uganda. Costa Mesa-based 31 Bits developed a different sort of business model, hiring women in Uganda to create colorful necklaces and bracelets from recycled paper; artisans are part of a five-year program in which they receive a consistent monthly income and education on everything from health and wellness to planning for the future. The jewelry is available right here in town, at Blue Eyed Girl, and has a far-reaching impact in addition to making a fashion statement: Each purchase of the handmade beads allows these women to send their children to school, feed and clothe their families, and pay for health care.

Shopping for a cause doesn’t always mean purchasing brand-new products made specifically to support an organization. Two thrift stores in Laguna Beach offer a twofold approach to fashionable philanthropy—individuals can donate clothing and accessories (as well as other items) in addition to making purchases that support the beneficiary.

Slightly more than a year old, Miles4Autism is a nonprofit thrift and consignment shop created with an ultimate goal: to open five locations in a 30-mile, Southern California-radius that will raise enough money to support full-time therapist salaries by 2020. The therapist will then open shop at a center to work with autistic children and take the medical bill burden off families. This will allow the money to be reabsorbed locally, according to founder Linda Hogan-Estrada.

“When parents are normally paying $175 an hour for therapy, at the max we could give [therapy for free]; we would be saving the community—the parents—about $10 million a year,” she adds. “My model is that if we save the families this money, they can instead spend it at the grocery store, restaurants, theater [and] clothes. … We’re putting the money back into the community.” 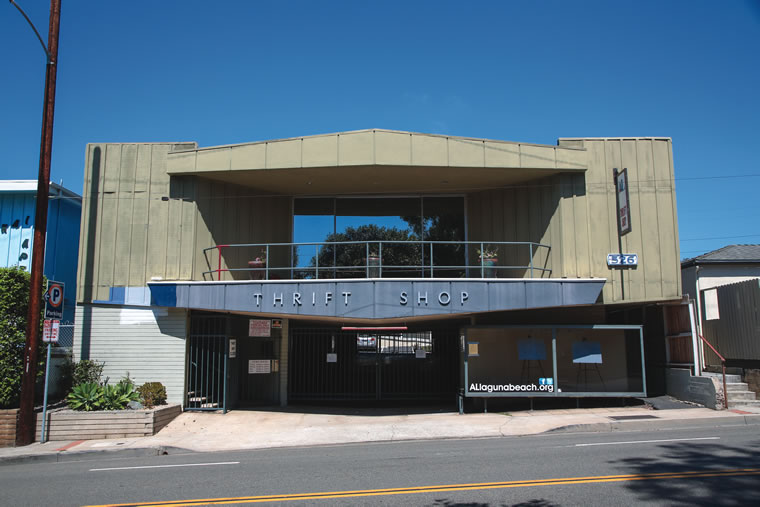 If the popularity of the long-running Assistance League (AL) Thrift Shop is any indication, the future looks promising. “We call it the Nordstrom of Laguna Beach because there [are] so many great finds here,” AL volunteer and former president Judy Soulakis says of the Glenneyre Street shop. “… Some people even say, ‘Charge me more.’ One lady spent over $10,000 here in a week’s span because she wanted to help the cause—we get all kinds of different people.”

The shop is able to put nearly 80 percent of proceeds back into 15 AL-supported philanthropic programs, one of which is the Early Intervention Program (EIP). This initiative invites local parents of special needs children to benefit from free therapy and group sessions, from birth to one year; Judy says sometimes just that little bit of weekly help can go a long way for these families.

The store’s success could be in part to the repeat donators, which include local businesses with excess inventory. Or, more likely, it’s the repeat shoppers who know their money is going back to these important programs—and that’s what it’s all about.