On the heels of its 150th anniversary, San Francisco’s Golden Gate Park offers an urban escape filled with gardens, museums and hidden treasures.

As the COVID-19 vaccine rolls out, some may be pondering future travel plans, but still desire a driving-distance destination until the pandemic is officially over. San Francisco, with ample open spaces—and plenty of museums, as long as restrictions allow indoor venues to be open—is only a six- to seven-hour drive, but feels a world apart from Southern California.

Last year, the City by the Bay celebrated the 150th anniversary of Golden Gate Park, a 1,017-acre jewel filled with hiking trails, gardens, lakes, museums and all kinds of sights to see—including windmills and a paddock of bison—providing endless paths for exploration. Pack a picnic, take a stroll, find a shady bench on which to relax and enjoy the scenery, sign up for a Segway tour or get some exercise at the numerous athletic fields, tennis and basketball courts, archery range or nine-hole golf course.

Among the more unique offerings are a disc golf course, bowling lawn area, polo field and the San Francisco Model Yacht Club and Bay Area Vintage Base Ball league, but activities like biking and roller skating are also encouraged. And, in nonpandemic times, summer brings concerts in the park.

Established in 1870 by an act of the state Legislature, and through a feat of engineering envisioned by designer William Hammond Hall, sand dunes in an unincorporated area then called the “Outside Lands” were transformed into the urban oasis that today provides recreational opportunities and a much-needed escape in nature for residents and tourists, amounting to 24 million visits per year.

Perhaps surprisingly, the space is 20% larger than Central Park in New York City. Here are just a few highlights to guide your next adventure. And, for those who can’t get to Golden Gate Park, a virtual celebration was set up at goldengatepark150.com with online exhibits, podcasts, videos of past concerts, virtual tours and more in honor of the anniversary.

There’s something for everyone in Golden Gate Park. When it comes to gardens, there are spaces for lovers of specific types of flowers like camellias, dahlias, fuchsias, roses and rhododendrons, but also the sprawling grounds of the San Francisco Botanical Garden, which encompasses 55 acres and more than 8,000 varieties of plants from around the world. Take a horticultural tour of the globe, from California to Australia, Asia, the Mediterranean and beyond. Flowering species, redwoods and succulents are all at home here. One unique section presents flora of the Andean cloud forest, a biodiverse area stretching from Venezuela to northern Argentina and nestled in between alpine peaks and hot, humid lowlands. San Francisco’s cool, foggy climate is similar to these tropical highland regions, allowing plants like Andean wax palms—the tallest palm species in the world—to thrive here.

Golden Gate Park is also home to the impressive Conservatory of Flowers, which has reopened (after a temporary, pandemic-related closure) as of press time; masks are required and capacity is limited. The building is quite a sight to behold. Opened in 1879, the white wood-and-glass Victorian structure is the oldest edifice in the park. It serves as a sort of greenhouse museum for 1,700 species of tropical and aquatic plants including many orchids, water lilies, carnivorous varieties and rare specimens like a 100-year-old giant imperial philodendron. Special exhibits including a popular butterfly room and miniature garden railroad have graced the conservatory through the years.

Also on the east side of the park, the Japanese Tea Garden provides a taste of culture. The oldest in the United States, it was developed for the 1894 California Midwinter International Exposition as a Japanese village exhibit. After the fair, landscape architect Makoto Hagiwara turned the area into a Japanese-style garden and served as caretaker, putting his own money, passion and creativity into the space. He and his family lived there until being forced to move to internment camps along with about 120,000 other Japanese Americans during World War II. After the war, the family was not allowed to return, but the garden remains as a tribute to his work and vision.

One way to further engage your senses is to enjoy a cup of traditional green or jasmine tea and other Japanese treats in the open-air tea house with views of the surrounding garden. Savor a bowl of piping hot miso or udon (noodle) soup, snack on some edamame or dorayaki (Japanese pancakes filled with red bean paste), or indulge in tea house cookies, green tea cheesecake or kuzumochi (sweet, gummy rice cakes) in flavors like strawberry, mango or lychee.

Visit in March and April when the cherry trees in this garden put on a show with their blossoms that seem to fall like pink snow in the breeze. Indeed, spring is the perfect time to visit Golden Gate Park, with so many plants blooming throughout. Every year in March, find upwards of 10,000 colorful tulips popping up around the Dutch windmill in the Queen Wilhelmina Garden, which also includes Iceland poppies. The tulip bulbs are planted every fall in this garden that was designed by Roy L. Hudson; it was named in 1962 in tribute to the longtime queen of the Netherlands, who died that year. This windmill, and another in the park, were once used to pump up to 1.5 million gallons of water every day for the city of San Francisco.

Not far from the windmills, at the west end, Park Chalet restaurant is a great place to take a break with plenty of outdoor seating. The eatery serves up house-brewed beer and guest ales on draft as well as wine, sangria and cocktails like the Lavender Lemon Drop and Blazin’ Cadillac. Sip while enjoying appetizers like buttermilk fried calamari or lobster macaroni and cheese. If you want a full meal, choose from Chalet fish tacos, braised short rib, a pulled pork sandwich, the Park Burger or battered fish and chips. And brunch is served on weekends from noon to 3 p.m. with options like blueberry lemon ricotta beignets and Dungeness crab Benedict.

Of course, the park isn’t only filled with gardens—there are two prominent museums, too. The de Young, established in 1895 and reopened in 2005 in a new, state-of-the-art building, presents 17th through 20th century American art as well as textile arts and works from Oceania, Africa and the Americas.

Meanwhile, the California Academy of Sciences boasts a rainforest inside a 90-foot-wide glass dome, a planetarium, aquarium and natural history museum all under one roof—which, by the way, is covered with grass and native wildflowers. This living roof captures storm water to prevent runoff; serves as natural insulation, which reduces energy needs for heating and cooling the building; and provides a habitat for birds, butterflies and other animals.

As of press time, both the de Young museum and the California Academy of Sciences had reopened following temporary closures due to COVID-19 restrictions; masks are required, capacity is limited and timed-entry tickets must be reserved online. (Note: The academy’s planetarium and some other displays will remain temporarily closed.)

The de Young has an exhibit titled “Frida Kahlo: Appearances can be Deceiving,” which continues through May 2 and features the artist’s personal items like clothing, jewelry and prosthetics, as well as a Calder-Picasso showcase that may be viewed through May 23 with more than 100 drawings, paintings, graphics and sculptures by Alexander Calder and Pablo Picasso; separate admission fees and timed reservations are required for these two special exhibits.

Even during pandemic closures, these well-known institutions have been sharing
their collections and inspiration virtually; online offerings are still available. The de Young features a variety of online exhibits at artsandculture.google.com/partner/de-young-museum. Choose from one about the museum’s history or virtual displays of Ruth Asawa’s abstract wire sculptures; Precisionist pieces inspired by Industrial Age machines and factories; or a fashion-focused exhibit titled “Stitching a New Paradigm: Dress Codes of San Francisco’s Counterculture.” Or peruse collections from oil paintings (from the likes of Claude Monet, John Singer Sargent and more) to metal designs and those by Hudson River School artists. Online visitors may also do a virtual tour, exploring room by room in the museum.

The Academy of Sciences also has abundant options for a virtual visit at calacademy.org/academy-at-home. Every Wednesday, catch a livestream of the newest planetarium show exploring Chile’s giant telescopes. The most popular livestreams from 2020 are also archived for your viewing pleasure. And tune in anytime to live webcams to watch the Academy’s penguins, stingrays or tropical fish in the coral reef. As noted on the website, these videos are geared toward K-12 students, but will no doubt be enjoyed by science-lovers of all ages. There are also STEM (science, technology, engineering and math) activities for children and a virtual exhibit of the best nature, wildlife and conservation photography from 2020.

Even with indoor venues now open, there’s more than enough online to feel like you’re virtually there—whether you’re taking a break between strolling the park’s gardens or sitting at home dreaming of your next trip.

Editor’s note: Due to COVID-19, the information within this article is subject to change depending on the state of California’s safety guidelines. Please reach out to the resorts with any questions or visit their websites for current updates before booking your trip.

While hotels abound in San Francisco, the Palace Hotel’s history dates back almost as far as Golden Gate Park.

A Gilded Age marvel that has hosted presidents and celebrities, the Palace Hotel was originally built in 1875—touted as the San Francisco’s first premier, luxury hotel and the largest in the world. After the 1906 earthquake and fire, the Palace was reconstructed in 1909, then later received an award-winning restoration in 1989 and another renovation in 2015, bringing together the best of modern amenities and classic style with more than 500 rooms and suites. The architecture in this AAA Four Diamond hotel still mesmerizes, especially The Garden Court (pictured): Although the restaurant here is temporarily closed due to the pandemic, the stunning glass dome ceiling, ornate chandeliers and marble columns are awe-inspiring. And, when the fitness center reopens, guests can admire the skyline while swimming laps in the heated, indoor pool with a curved glass ceiling. (marriott.com) 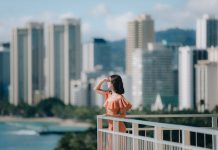 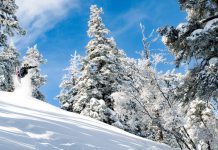 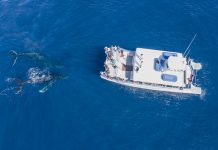 A Whale of an Adventure