Juice it up in Laguna with freshly squeezed sips that offer a boost of essential vitamins and minerals. 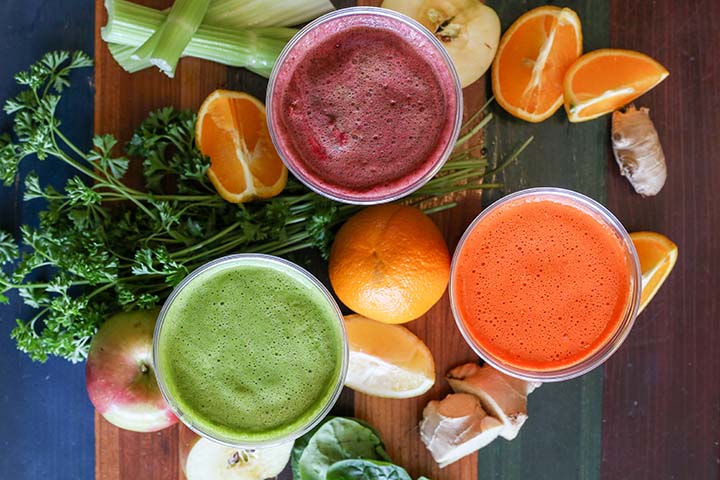 At Juice & Shakes, some customers jump-start their day with the shot board: three 2-ounce glasses of special blends with ingredients such as beet, kale, lemon and ginger. The North Coast Highway shop, which opened last fall, is the newest place for locals to get their fruit and veggie fix—and also an indication that the juicing sensation shows no signs of slowing down.

“It has been growing,” says Chris Keller, co-owner of Juice & Shakes. “I want to say 2010 is when it really started to surface, but, you know, it’s definitely taken hold and now it’s become more popular. I think the easiest way to describe it is people just want to feel good and they want to feel healthy.”

In addition to Chris’ latest venture, we have three other shops in town dedicated to juicing, as well as myriad restaurants and stores offering fresh sips. The juice scene in Laguna is ripe for exploring, with plenty of ways to get your daily dose of fresh fruits and vegetables in a 16-ounce cup.

“I think it’s really amazing the shift that we’ve seen in this country over the past five years, that people are really trying to do things healthier for themselves,” says Lori Kenyon Farley, a partner at Project Juice, which recently merged with Ritual Wellness.

While eating whole fruits and vegetables is ideal, according to Laguna-based clinical nutritionist Stella Metsovas, she explains that juices still pack a nutritional punch and tend to be more convenient than grabbing a veggie snack to-go. “Are people going to take a cucumber in the car and just chomp on it? Probably not,” says Stella, who recently completed a juice bar study for one of the world’s biggest beverage companies. “Are people going to have, you know, a cucumber juice mixed with lemon and parsley and apple? Yes.”

A single cup of juice can hold several pounds of compressed produce that’s high in nutrients, but the body doesn’t have to expend energy to break down an entire apple, for example. Juices served fresh also contain live enzymes, which are needed for digestion and other functions.

In addition to single-serving drinks, Nekter Juice Bar and Project Juice offer popular multiday cleanse packages, which involve ingesting only juice for several days. Lori explains that the idea of a cleanse is to give your body a break, allowing it to use energy typically spent on digestion to restore and repair itself. Some say this practice flushes toxins, leads to brighter eyes and improved skin.

An occasional juice cleanse is generally safe for a few days and can help reset eating habits after an indulgent period, Stella says, but the key is making good food choices afterward. She recommends a modified cleanse—supplementing juice with fish and veggies for one meal each day—and advises against longer master cleanses.

“The main problem I see with the popularity of juice cleanses is with people going strict for three days, four days, and then come the weekend, it’s time to party, basically,” Stella cautions. “You know, it’s not going to undo that, ever. A green juice is never going to come in and undo the damage caused by a real night of binge drinking or having four slices of pizza.”

The health benefits may be plentiful, but a clear cup filled with thick, green liquid can still be intimidating. “If the juice doesn’t taste good and you’re just throwing a hodge-podge of things in there, I don’t think you’ll drink it—it goes in the trash,” says Nekter co-owner Alexis Schulze.

She’s not opposed to incorporating apples—at least in the beginning—to make the vegetables tolerable, as long as you’re aware of the calorie content. As she says, “If that’s what it takes to get the rest of it in you, then you don’t have to be so elitist and afraid to have [apples in the juice].”

Taste is a critical component to juicing, one that may be disregarded by those in search of the healthiest potion possible. The shops around town have options for both sides of the spectrum and offer ways for people to be nutritious while also savoring the flavor.

“If we do anything that’s fruit-based at all, we generally put coconut water in it,” Lori says. “It’s super high in potassium (an electrolyte) … and it really helps cut down on the sugar content of the juice, but still makes it really delicious and sweet.”

For a green drink that’s more approachable, she suggests Project Juice’s Potion 10, a blend of kale and other rich greens mixed with pineapple, pear, cucumber and lime. “For people who are new to juicing or feel like they don’t have a palate for green juices, they can still get the benefits of the leafy greens, the romaine and the spinach, without actually having to get the taste of it,” Lori explains, adding that there’s no right or wrong way to make juice. “Choose what you like and make sure you throw in some greens.”

Armed with a basic of knowledge of the health benefits, many may want to try juicing at home—and Laguna’s juice bar owners have plenty of tips, which begin with finding the right equipment.

“No matter how good your juicer is, if it’s not easy to assemble and take apart and clean, the chances of you actually using it are not that good,” Alexis advises, adding that you’ll want a machine that makes it easy to incorporate juicing as part of a daily routine.

Chris, however, advocates for a higher quality: “You can get a masticating juicer from $200 up to $1,200,” he says. “It’s worth the extra money—you get more production out of each vegetable and then it’s just a better process.”

Cold-press (masticating) machines are ideal, according to Lori, as they eliminate the heating process that causes a loss of enzymes and minerals. However, she says the only true cold-press system on the market is the Norwalk juicer, which grinds the produce and then employs a hydraulic press to extract maximum liquid and nutrients. This commercial equipment is too heavy and expensive for home use, so she instead recommends buying a masticating machine like the Omega 8006.

But, in the end, it’s what goes into the juicer that’s even more important. “If you can incorporate more fruits and vegetables into your daily life … it’s really going to impact your health,” Lori says. “So choose what you like, whether you’re making it at home or grabbing it on the go. Choose organic whenever possible—just whatever will help you get more of those into your diet is a great thing.”

Juice—basically the water extracted from fruits and vegetables—contains a multimineral blend such as magnesium and vitamin C, which the body needs, explains local clinical nutritionist Stella Metsovas. Depending on the ingredients selected, juice can be tailored to provide certain benefits, from detoxing to boosting immunity or aiding digestion. Here, learn about some top ingredients that do your body good and where you can try them around town.

Kale: This dark leafy green is packed with protein and vitamins. At at Project Juice, try it in the no-fruit Deep Green or the Potion 10, a sweeter option that brings fruit into the mix. The Greenie is a good kale-based option at Nekter Juice Bar, with celery, cucumber, parsley and spinach enhanced by a touch of apple and lemon.

Turmeric: A common ingredient in curry, this root is known for its anti-inflammatory properties. It has been used for thousands of years to treat a variety of ailments; recent studies have shown that it can assist with digestive issues. Try the turmeric lemonade at Project Juice or the No. 6 on the 16-ounce menu at Juice & Shakes.

Ginger: Studies have shown this root can help balance the immune system, and it’s also known for reducing nausea. “Anytime you’re not feeling well, I kind of force anyone to take a ginger shot,” says Nekter co-owner Alexis Schulze. Project Juice offers ginger in the Immunity drink, which also incorporates citrus and cayenne.

Pitaya: Alexis is a big fan of the bright pink pitaya, which grows on a cactus along the side of a volcano in Nicaragua and is related to dragon fruit. It is low-calorie and full of antioxidants. “It’s chock-full of all these incredible nutrients and [it’s] energy boosting, so that’s another one we use in our smoothies and bowls,” Alexis says.

Check out these local shops for a dose of liquid nutrition that’s full of flavor. 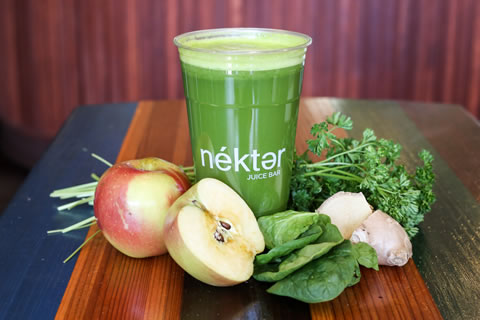 The Art of Juicing: Inside the Art of Fitness gym, pressed organic juices, smoothies and “cures”—special blends to aid in the body’s recovery from colds, fatigue, indigestion and more—are offered as well as hummus wraps and kale salad. (949-464-0203; theartofjuicing.net)

The Stand: A fixture in town for more than four decades, it’s a favorite stop for fresh-squeezed juice and smoothies as well as vegan food—sandwiches, soups, salads, burritos and more. (949-494-8101)