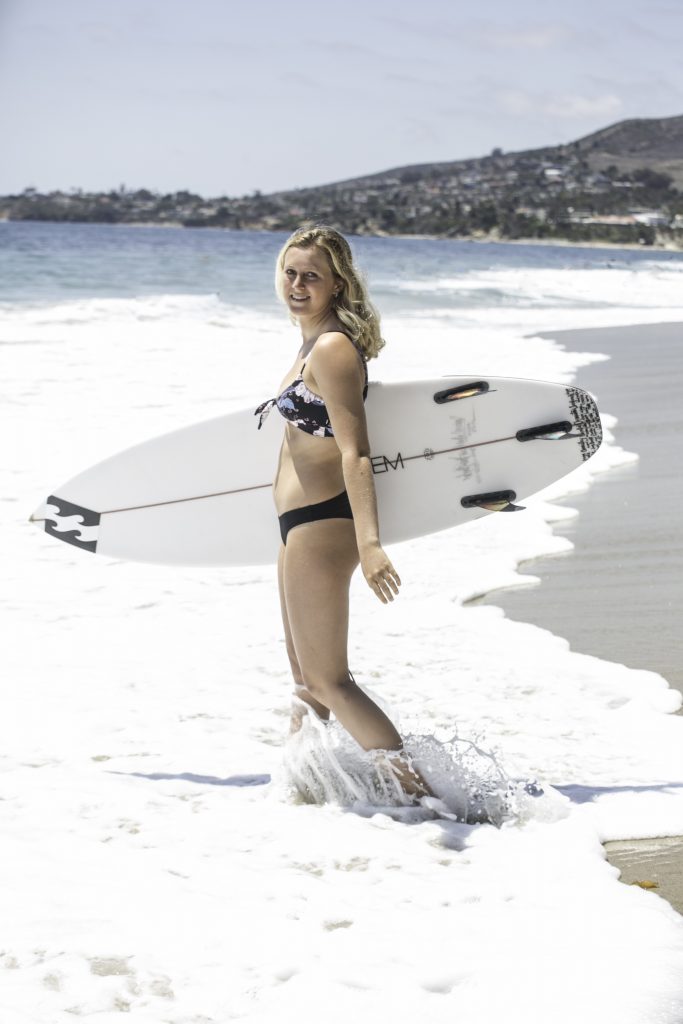 Laguna Beach junior surfing phenom Kayla Coscino is carving a path to success—in the water and out of it.

Kayla Coscino deserves every bit of attention she receives. The Laguna Beach High School rising senior was named to the USA Junior Surf Team last year and again this year. She’s one of just eight girls in the junior surf team’s under-18 group. Together with eight girls in the under-16 division, inclusion in this elite squad essentially means that Kayla is one of the top 16 female junior surfers in the nation. Quiet, humble, pragmatic and thoughtful, Kayla is a rare breed of talent and intellect—a combination that has served her well in the water.

Making the USA Junior Surf Team is only the latest chapter of Kayla’s story. And, to thicken the future plot, consider this: As of 2020, surfing will be an Olympic sport, and the San Clemente-based USA Surfing—the same organization that runs the USA Junior Surf Team—is the official national governing body for the sport of surfing in the United States, recognized by the U.S. Olympic Committee and International Surfing Association. But more on this shortly.

Kayla’s story began with her catching casual waves off the shore of Kauai, in Hawaii, between the ages of 4 and 6, then longboarding with her father as a preteen in Laguna Beach, eventually graduating to the shortboard and, finally, beginning to compete just five years ago. “My parents have had me by the water since I was a baby. … It’s just so fun and freeing,” she says.

But this is more than a fun hobby, as evidenced by the accolades that are rolling in. According to the World Surf League, Kayla is ranked 10th (as of late June) on the Women’s Junior Tour and 220th in the Women’s Qualifying Series. She placed 17th in last year’s Vans U.S. Open of Surfing, in the women’s junior division. At the Ron Jon Roxy Junior Pro, she finished ninth last year and 17th this year. She was also ranked sixth in USA Surfing’s Prime Series for under-18 girls in 2017-2018.

Primarily a shortboarder, Kayla also longboards in the summertime or when the waves are small. Powerful is often the word used to describe her surfing style.

“She surfs with power and, in international competition, that’s a big deal,” says Joey Buran, head coach of USA Surfing. “If it … [was] softball, she’s hitting home runs. She’s driving the ball out of the park. She surfs with power.”

This power has earned Kayla several titles at competitions including the National Scholastic Surfing Association Interscholastic State Championships in the high school varsity women’s division last year, and the Western Surfing Association West Coast Championships (in the under-16 age group). These titles come with hard work. In addition to training with the U.S. team once a month before contests, Kayla is a member of the Laguna Beach High School surf team, which competes year-round. She also works with a private coach a couple of times a month. Not to mention the times she simply goes out to have fun and surf with her friends. 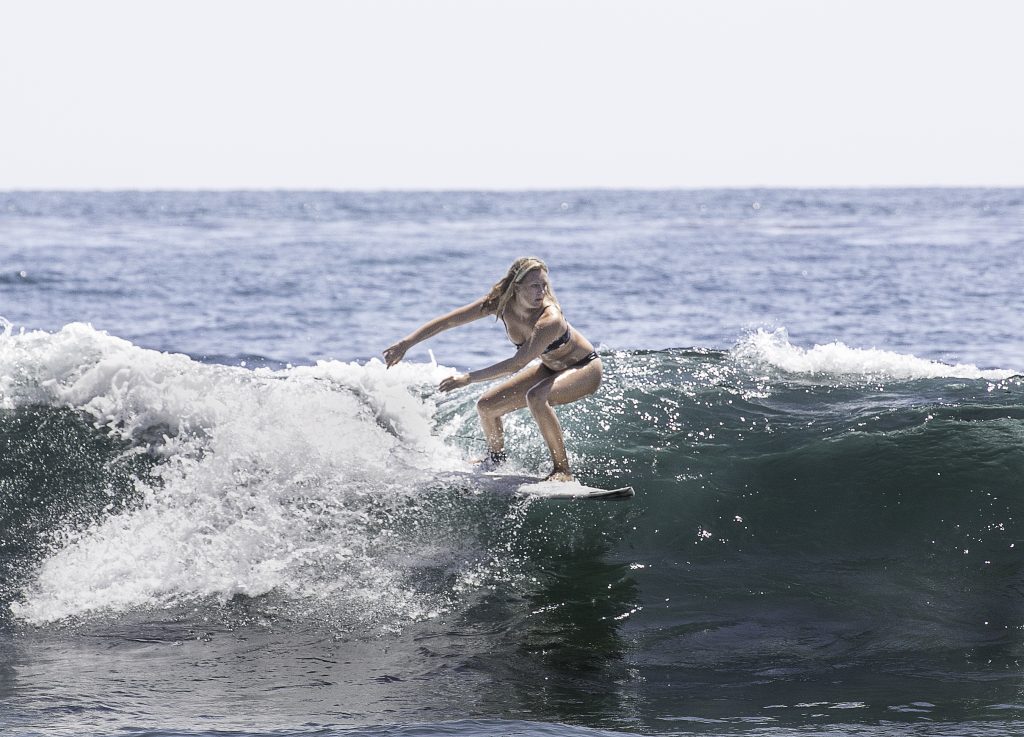 Known for “flying under the radar,” as her private surf coach Ryan Simmons puts it, Kayla does not immediately strike one as an elite surfer. “She’s like a quiet assassin,” he says. “She doesn’t say much on land, but she gets her work done. Like making the USA Junior Surf Team. … That’s a huge accomplishment and, for someone from Laguna, which isn’t really known as a hotbed of competitive surfers—it’s not a San Clemente or a Huntington [Beach]—that kind of speaks for itself.”

Laguna Beach High School coach Alisa Cairns is Kayla’s longtime mentor, a family friend and neighbor. “She’s definitely determined, pretty fearless, she works really hard [and] she’s smart,” Cairns says. “She’s a little bit quiet out of the water and, in the water, semiquiet, but she’ll hold her own. She won’t back down. … She is pretty confident in herself.”

Buran, for one, is certain that Kayla will continue to improve and trend upward in competition. “She hasn’t come close to what her ceiling is,” he says. “… She’s a really good athlete. … In the United States, she’s one of the top 10 high school-age girl surfers. Just think about that for a minute. If you told me about a girl that plays for the Breakers in soccer, and she’s one of the top 10 girls under 18 in the United States, I’d say that is amazing, and she’s heading for USC, UCLA, wherever she wants to go. Well, that’s what Kayla is in surfing. If UCLA had a surf team and gave out full-ride scholarships, they’d [have] been recruiting Kayla for two years already.”

Kayla is also known for excelling in academics. Her junior year, notoriously the most difficult of one’s high school career, she took on two advanced placement courses, earning a GPA high enough to rank her 16th in her class. She is thinking about applying to the University of California’s San Diego, Santa Barbara and Los Angeles campuses, as well as University of San Diego and Point Loma Nazarene University.

According to her mom, Karla, this drive stems partially from Kayla’s birth order. “She’s the baby of the family, so she’s super competitive,” Karla says. “She’s always had to keep up … with her brothers. She always strives to be the best she can be and to beat them. … But she’s also self-motivated. She only got on the longboard less than five years ago. She’s come a long way in five years. Nothing’s going to stop her. When she puts her mind to something, she just goes for it. The other thing is she’s really smart; she thinks about what she’s doing.”

This sentiment is echoed by all three of her coaches. But balancing the pressures of being an elite athlete and a top student has not been easy. “It’s really hard, especially when you’re traveling,” Kayla says. “If the waves are really good, I’ll do all my homework, but maybe I won’t study as long. Then if it’s flat, I’ll make up for it. I figure it out each day and each day’s a little different, but it all works out.”

Everything Kayla says is tinged with this same positivity—the faith that things will work out, one way or another. When asked about her personal career goals, she says, “I definitely want to go to college. … After I graduate, I’ll push for making the World Tour and going professional, but, if that doesn’t work out, I think I want to work for one of the surf companies—just be in the industry and travel the world.”

In fact, her biggest inspiration in the sport is someone who chose, successfully, this same less-traveled road. “One of our family friends, Taylor Pitz, was a great surfer and a member of the USA Surf Team for multiple years,” Kayla says. “She graduated from LBHS, was admitted to Stanford, attended and graduated from UCLA, and is attending law school at UCLA. She proved that it was possible to balance school and surfing, which is why she is one of my role models.”

Ironically enough, Cairns (a surfing icon in her own right) also took this path. “I definitely wanted to be a pro surfer, but I also wanted to have an education and a degree,” she says. “I can see a lot of similarities between myself and Kayla. … There haven’t been that many of us here in Laguna Beach following that path of competing and going to school. … It’s nice to see Kayla coming along.”

Eye on the Horizon

Last year, the U.S. team won the VISSLA International Surfing Association World Junior Surfing Championship in Hyuga, Japan. Kayla was not yet part of the team, but one of her top goals is to make this year’s team, which will compete in Huntington Beach in late October. Only the top six girls in the country will go—including only three in Kayla’s age group—so it’s safe to say she has her work cut out for her.

Also looming large in everyone’s mind is the 2020 Summer Olympics in Tokyo. Surfing will be an official Olympic sport for the first time and every professional surfer, to some extent, has gold medals on the brain. “I think it’s really cool,” Kayla says of surfing being inducted into the Summer Games. “It gives you something to push for and want to be in. We’ve always watched the Olympics, and now you’re like, ‘Wait, that could be me.’ ”

Getting there, especially in 2020, will not be easy—for anyone. And for surfing powerhouses like the U.S., Brazil and Australia, the qualification process is even more brutal. In a simplified nutshell, the top 10 men and the top eight women according to rankings on the 2019 WSL World Championship Tour (surfing star John John Florence of Hawaii won this tour the last two years in a row) will automatically qualify. Globally, only 40 surfers (20 men and 20 women) will compete in the Olympics. The next catch? Each country is limited to just two qualifiers per gender. That means if three Americans land in the top 10 on the 2019 tour, the third American will not qualify, and whoever wound up No. 11—given that he or she is from a country that does not yet have two qualifying athletes—gets the green light instead. To insure balanced representation from all countries, the remaining selections will come from a complicated process of 2019 and 2020 ISA World Surfing Games results.

To put things in perspective, Buran says, “If you go from last year’s rankings, it would be John John Florence, Kolohe Andino, Carissa Moore and Courtney Conlogue. … We are most likely going to be one of only maybe two or three countries that would automatically qualify through the WSL rankings.” However, he says, it’s generally believed that for the 2024 Olympics in Paris and the 2028 Games in Los Angeles, there will be more spots available and a different type of selection criteria.

So, while making the 2020 Olympic games is not a realistic goal for Kayla, her roadmap to Paris in 2024 is not an impossibility. “We have the best junior team in the world for girls,” Buran says. “We’re loaded with incredibly gifted, talented, elite girl athletes under 18, and Kayla’s one of them. The next great challenge for her is to find another gear and grab a spot to represent USA at the World Junior Championships. That’s her goal for the next two years.”

It is a goal Kayla will be taking seriously. “I would love to participate in the 2024 Olympics,” she says. “It would be an amazing opportunity to represent surfing, and America, on such a large scale. It would be such an honor to actually be one of those athletes representing our country.”

Of course, at the end of the day, all the rankings and the accolades and the potential gold medals are not as important to Kayla as the love she feels for her sport. “I just love being in the water,” she explains. Her advice to younger girls wanting to pursue surfing? A typical Kayla answer, both pragmatic and optimistic: “Stay in school for sure, you can definitely find that balance. … You learn things in school that can really apply to surfing.

“In school,” she says, “I learned time management, especially in my AP classes, and this really helps with time management during heats. In school, you also need to have a positive attitude if you want to succeed; the same thing applies to surfing. And never give up. … Everything happens for a reason.”