Home base: Grew up in Johnsburg, Ill., and relocated to Southern California seven years ago.

Background: Studied business at North Central College in Naperville, Ill., but began painting in his late 20s after realizing how expensive it would be to purchase art to decorate his walls.

Work: David’s latest works paint a picture of past and present society in Orange County’s coastal communities. Amalgamations of 1960s-era advertisements, bold paint and text overlay, his pieces illustrate the profound contrast between Southern California’s rampant consumerism and the laidback attitude of local surf and skate culture. Combining brightly colored paint with the muted tones of vintage magazines and celebrity portraiture, his pieces are reminiscent of pop art from a bygone era.

David admits that when he first embarked upon his journey from Chicago to Orange County, he’d already developed an idea of what living along the California coast would be like. The image in his head, however, was altered by reality, and he’s poured both his early misconceptions and the resulting truths into his art, juxtaposing the tenets of materialism with the ideals of the surf and skate culture for which California is known.

He explores his interest in 1960s art by borrowing material from surfing advertisements and magazines from the same period. Whether he is using an image of a surfer or simple text, he incorporates selections that contribute to the overall message of the piece, striving to make art that is both personal and relatable while still reflecting local society.

David’s latest exhibition, “Greetings From the O.C.,” will showcase art based on this surf-versus-vanity culture. New works will be on display at the Artists Republic 4 Tomorrow gallery through March 30, with an opening reception on the first night of the exhibition from 6-9 p.m. (949-988-0603; ar4t.com)

Home base: Born in Fort Kent, Maine, but has lived in New York City since 1976.

Background: Trained at the Portland School of Art and the Concept Center for Visual Studies, both in Portland, Maine, and was awarded an honorary bachelor of fine arts degree from the Maine College of Art.

Work: Don’s minimalist abstract paintings typically focus on a central element, usually a square or rectangular shape. This, along with his customary straight lines and bars, makes his work very architectural in nature.
One element that is paramount to Don’s work is the use of color. The central element is typically dark—either black or charcoal gray—and set against a white background or outline. Bursts of color come in thick bands that line either the top and bottom or the sides of the piece, radiating off of the canvas in contrast to the dark and light shades.

Each painting contains a strong sense of movement, propelling it to another level as the viewer imagines the shapes spinning atop the panel. There is a visual link between the different works, but every piece brings forth a unique emotional element that draws the viewer in.

Following shows in New York and Connecticut, Don will have 10 paintings displayed at the Peter Blake Gallery beginning April 12. More than half will be recent pieces that have not yet been exhibited. (949-376-9994; peterblakegallery.com)

Humanitarian Artists Give Back

There’s a new way to give back to the less fortunate in Laguna—by buying a piece of art. Last October, the Laguna Gallery of Contemporary Art transitioned to a fully humanitarian gallery, making it the first of its kind in the country, according to Christiana Lewis, the gallery’s art director. To further the cause, every artist showcased at the gallery now donates between 10 and 70 percent of proceeds to a variety of organizations focusing on autism, suicide prevention, domestic violence, childhood neglect and abuse, human trafficking, education, homes for the underprivileged and HIV/AIDS research.

“I loved my job, but something was missing,” Christiana explains of the transformation. “If we’re not helping, what are we doing here?” Since the switch, the gallery has received a tremendous amount of support from both local and international buyers. Artwork shown at the gallery includes a range of diverse styles, such as Jacek Lazuka’s contemporary pop art, Jon Seeman’s abstract sculptures and Bridgette Shaw’s mixed media pieces.

During the month of March, painter Sandra Jones Campbell reveals an obvious passion for both art and music as she combines the two in her artwork for “Get Jazzed.”

Then, in April, a group show features gallery artists Maria Bertran, Tom Swimm, Jacobus Baas and Bryan Mark Taylor. Tom’s exhibit will be titled “Harbors of the World,” and Maria, Jacobus and Bryan will display new oil paintings created in the city of Laguna to commemorate the gallery’s considerable impact as a pillar of the artistic community. (pacificedgegallery.com) 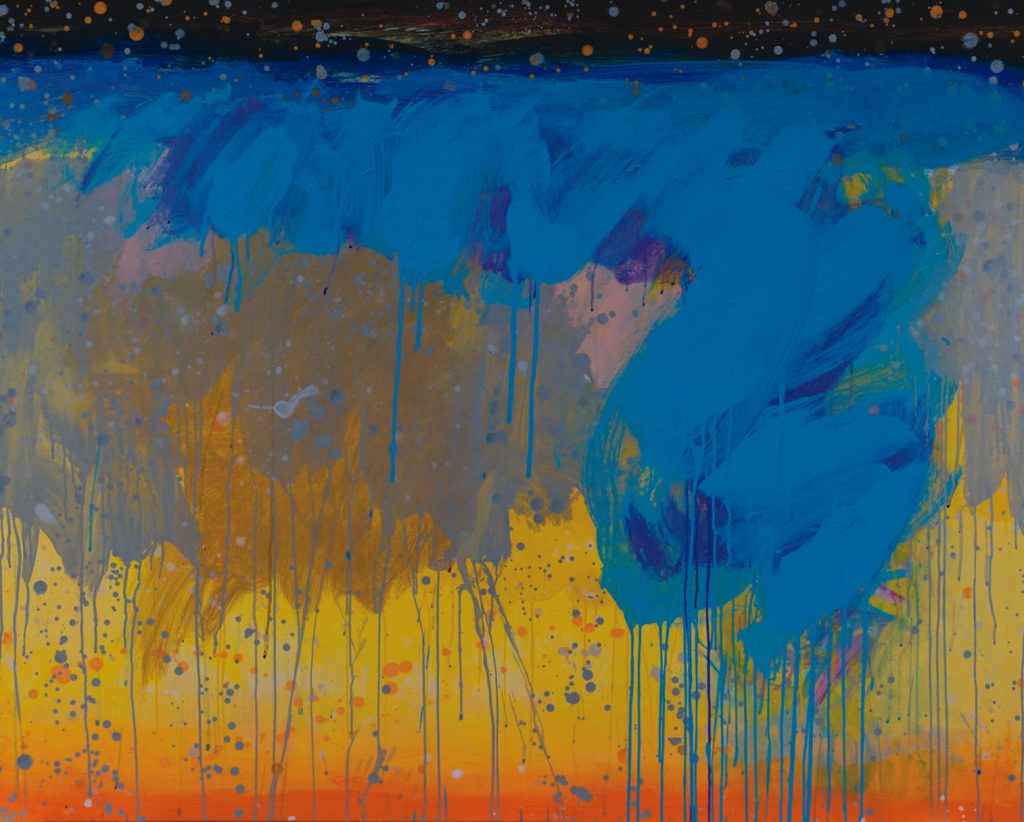 “Art That’s Small at City Hall”
The Laguna Beach Arts Commission has coordinated a citywide art competition open to local artists, and from March 17 to April 24, all accepted submissions will be on display in an exhibition at Laguna Beach City Hall. (949-497-3311; lagunabeachcity.net)

Coastal Eddy, a Gallery
“Transitioning Portals” features paintings from artist Lauren Mantecon’s “Portals” series alongside clay sculptures by local high school and college students through March 29. These clay interpretations serve as a means through which to compare and contrast Lauren’s work while allowing up-and-coming artists to gain exposure. (949-715-4113)

Dawson Cole Fine Art
Continuing through March 27, “Making Faces” examines modern portraiture and how the art form has maintained prominence throughout history to become what it is today. The exhibit features works from contemporary artists, including Chuck Close, Jian Wang and Richard MacDonald. (888-972-5543; dawsoncolefineart.com)

Forest & Ocean Gallery
Visit the recently expanded Forest & Ocean Gallery on March 15 for an artistic discussion and refreshments. The new space will spotlight photographers Tom Lamb and Hans Rindfleisch, as well as sculptor Paul Woodward, from March 10 to April 6. (949-371-3313; forestoceangallery.com)

JoAnne Artman Gallery
“Yes,” which runs through March 31, showcases new works by Colombian-American fine artist America Martin. Her annual solo exhibition features three new series: “Native American,” which focuses on the people and places of New Mexico; “Bathers,” an homage to Paul Cézanne’s famed series of the same name; and “Still Lives,” an ode to the vibrant colors and shapes of fruits and flowers. (949-510-5481; joanneartmangallery.com)

Laguna Art Museum
In celebration of Wayne Thiebaud’s recent gift of one painting and six prints, the Laguna Art Museum is presenting “American Memories,” an exhibition of 60 to 70 pieces spanning the artist’s career, through June. The assemblage highlights the artist’s repertoire through paintings, drawings and prints that depict a mixture of everyday objects and landscapes painted in the valleys of Sacramento. (949-494-8971; lagunaartmuseum.org)

Sandstone Gallery
Float on over to Sandstone Gallery to view two dreamy exhibitions: Sunny Kim’s “Cosmic Dreams” and Ann Kim’s “Dreamscapes” through March 31. Both artists convey intense emotion through works based on the beauty of the heavens and nature, respectively. (949-497-6775; sandstonegallery.com)