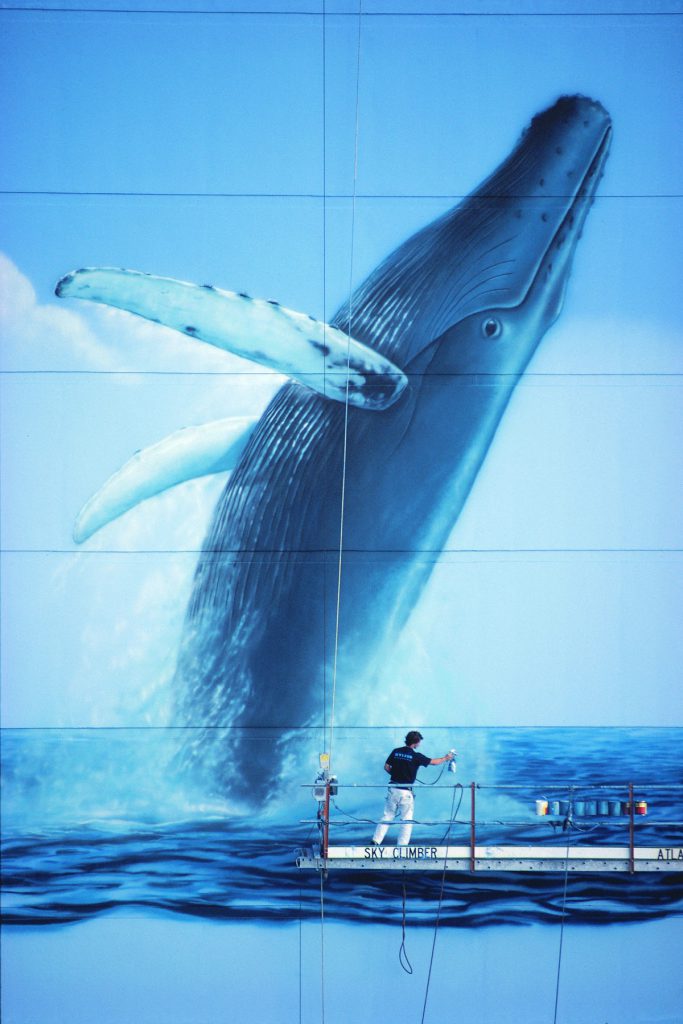 Wyland Foundation marks 25th anniversary of working to preserve the ocean and other waterways.

Bridging the worlds of art and science to help preserve the ocean was the inspiration behind starting the Wyland Foundation in 1993. Now celebrating its 25th anniversary, the nonprofit established by Laguna Beach-based marine life artist Wyland has made great strides in protecting waterways and promoting water conservation through the years.

“Most foundations were focused on one thing or the other, but I believed that art and science together could have a big impact on our environment,” Wyland says. “We would enlist some of the top scientists in the world to join and creatively inspire a generation to learn about the importance of a healthy environment and take action.”

The organization is dedicated to raising awareness through student art contests, an interactive mobile science museum and other education programs, while also encouraging people to make a change through the National Mayor’s Challenge for Water Conservation and honoring Earth Month Heroes with awards for making a difference.

“Our idea is that if we can work on a local basis and do the right things, by keeping debris and pollutants out of our watersheds, it not only benefits human health, it supports a diversity of life up and downstream,” Wyland says.

The foundation also works globally. “What happens to the waters in China, for example, will eventually find its way here off of our shores, and vice versa,” he adds.

Wyland notes that famous marine biologist Sylvia Earle, an explorer-in-residence for National Geographic, has said what we do in the next 10 years will determine the next 10,000 years.

“The good news is this generation gets the message and is taking action,” Wyland says. “I think that’s why we’re so passionate about sharing our knowledge and inspiration. In the 1960s, people were dumping waste directly into our water. Places like the Cuyahoga River in Ohio were so polluted that they literally were catching on fire. The next generation wants something better, and we want to help them achieve that.”

Over the last 25 years, the foundation has evolved, adding relevant programs to raise awareness.

“We are always finding new and creative ways to inspire and inform people about clean water and a healthy ocean,” Wyland says. “Our team has done outreach on every coast, going to hundreds of cities, meeting people [and] engaging them about clean water.”

Indeed, the foundation has had a broad-reaching effect. Perhaps the most visual examples are the 100 murals featuring whales, dolphins and other marine life that Wyland painted in more than 17 countries, raising awareness of our fragile ocean habitat and instilling an appreciation for its creatures in everyone who passes by these “Whaling Walls” around the globe.

“The underlying message of the Whaling Walls was that—even thousands of miles away from the ocean—what we were doing in our cities was finding its way downstream,” says Steve Creech, executive director of the Wyland Foundation. “What we sent to our landfills and dumped in our storm drains and put in our air would have a long-term effect on ocean health. … I think Wyland’s work and our programs are helping people to understand that we have to manage the entire marine ecosystem better overall.”

Beyond basic awareness, immersive education is also key to helping people truly understand the problems our environment is facing. “Our programs are designed to connect with people in different ways,” Creech says. “But all of them come down to inspiring people to be better stewards of our ocean, lakes, rivers, streams and wetlands.”

The foundation’s Clean Water Mobile Learning Center, a 1,000-square-foot, interactive science museum on wheels, brings the classroom to students and communities around Orange County and as far away as Mexico and West Virginia, reaching more than 1 million people so far. The biodiesel-fueled traveling center is equipped with a multisensory theater and six hands-on stations including a flowing river exhibit, touch-screen watershed display and a model that shows the effects of pollution—like motor oil and fertilizers—on the water system.

In addition to the mobile center, more than 15,000 students from 45 states have participated in the foundation’s National Art and Mural Challenge, in which they work individually or together on art projects to raise awareness about the ocean, wetlands, lakes and rivers as well as the animals that call our blue planet home, from sea turtle to manatees.

The foundation has also undertaken art projects with a conservation theme for two Olympic Games. And for Wyland’s last Whaling Wall, the foundation worked with children across the globe to make a series of murals stretching a mile long. Depicting a variety of water habitats, the murals were displayed at the Olympics in Beijing and then for two weeks along the full length of the National Mall in Washington, D.C., and were also part of the Sant Ocean Hall exhibit grand opening in the Smithsonian Institution’s Museum of Natural History.

After awareness and education, the next step is getting people to take action to reduce their effects on the environment. One of the foundation’s campaigns is the National Mayor’s Challenge for Water Conservation, which pits cities against each other to see who will pledge to make the biggest reduction in water usage from April 1-30.

Since the annual competition started eight years ago, residents across all 50 states have pledged to decrease their water usage—through taking shorter showers, turning off the tap while brushing their teeth or watering their lawns less—for a total of more than 10 billion gallons. And, notably, the city of Laguna Beach has won this challenge a few times.

Although the foundation already boasts a list of big accomplishments, celebrated at a 25th anniversary gala in November, the work is far from done. Among the recent initiatives, Wyland and Creech have been working on ways to expand the organization’s global efforts.

“Our goal was to reach out to all 7 billion people and encourage them to protect preserve and respect water in their towns, villages, cities, states and countries,” Wyland says. “The idea was that we can’t protect one body of water without thinking about the next.”

As part of this effort, the foundation last year signed a partnership agreement with the United Nations Environment program, which includes the Wyland World Water Pledge, urging people to learn how their actions on land affect the coasts and oceans globally.

“We have now partnered with U.N. Environment to engage every citizen in every country on the planet to take one minute and learn how they can conserve our precious water [because,] without water, there is no life,” Wyland says.

“All the debris that washes from our homes into our storm drains finds its way into these channels and out to the oceans,” Wyland explains. “If people can reduce trash that ends up in the storm drains, it can have a big impact in making our coasts healthier.”

And this year, the foundation is working with the city of Cleveland to restore Wyland’s 1997 mural, “Song of the Whales,” on the Cleveland Public Power Plant building to call attention to the 50th anniversary of the 1969 Cuyahoga River Fire, which focused attention on the health of this nation’s lakes, rivers and waterways, Creech says. “In fact, the Cuyahoga River fire was one of the events that led to the creation of the U.S. Environmental Protection Agency and the Clean Water Act,” he adds.

The fire started in June 1969 when a spark from a passing train ignited an oil slick from industrial waste in the river, which was considered one of the nation’s most polluted waterways and caught on fire multiple times through the years. Luckily, much has been done to clean up the river over time.

Whether highlighting the river’s struggles by restoring a mural or getting people to pledge to use less water, all of the Wyland Foundation’s work supports a singular mission.

“Our goal is to expand our efforts to connect with people,” Creech says. “We want everyone to become more creative, more inspired, but, above all, more solution oriented. I really think we need that mindset now more than ever. We want to open the doors to the arts [and] sciences and leverage those areas in support of a healthy marine environment.”

Make a difference with these tips to keep the oceans clean and conserve water.

• Use reusable grocery bags and refillable water bottles instead of single-use ones that could make their way to the ocean and harm wildlife.

• Talk to your local PTA or festival organizers about bringing the Wyland Foundation’s Clean Water Mobile Learning Center to your school or event.

• Make use of the foundation’s online resources like water conservation tips or beach cleanup instructions and data cards.

• Make a contribution at wylandfoundation.org.