These local art institutions are two of only five in Orange County to be selected as part of the Getty Center’s “Pacific Standard Time: LA/LA” initiative.

Revolving around Latin American and Latino art, more than 70 museums and cultural institutions plus over 60 galleries spanning from Los Angeles to Palm Springs and San Diego to Santa Barbara will take part in the Getty Center’s “Pacific Standard Time: LA/LA” initiative from September 2017 through January 2018.

Two local institutions that will participate in this far-reaching project include Laguna Art Museum with both “California Mexicana: Missions to Murals, 1820-1930” and “Dan McCleary: Prints from Oaxaca,” and Laguna gallery saltfineart and Rawsalt with “Descendants and Dissonance: Cultural Iconography in Contemporary LA.” Not far away, the University of California, Irvine is also involved, presenting “Aztlán to Magulandia: The Journey of Chicano Artist Gilbert ‘Magu’ Luján” through Dec. 16 at its University Art Galleries. 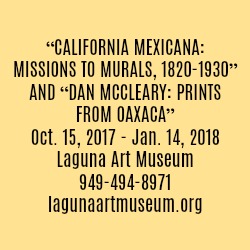 While there are many museums taking part in “Pacific Standard Time: LA/LA,” few have exhibits that encompass the theme as well as the showcases at Laguna Art Museum. While “Dan McCleary: Prints from Oaxaca” portrays a very modern look at Mexican American art, “California Mexicana: Missions to Murals, 1820-1930” provides a more historical viewpoint. “ ‘Pacific Standard Time: LA/LA’ is all about the exchange between Los Angeles and Latin America, so a lot of museums are doing contemporary exhibitions,” says Cody Lee, the museum’s director of communications. “Ours is focusing on what’s historical.”

The historic exhibition includes more than 100 pieces of art, including paintings, posters and even films. A notable painting, crafted by Ferdinand Deppe in 1832, is one of the oldest in the museum’s collection. Pieces lent by over a dozen other museums are also included. “We’re almost like a prequel for the other exhibitions that people might see,” Lee explains. “It’s a great starting point for people interested in ‘Pacific Standard Time’ because we’ll … [give] the people a really neat perspective on a lot of the cultural exchange, transitions, geography, history and cultural changes during the times represented in this exhibition.”

But this isn’t the museum’s only contribution to the initiative. The Dan McCleary display features prints that the Los Angeles-based artist has created since 2000, on regular visits to Oaxaca, Mexico. In addition to his Latin-influenced artwork, McCleary founded nonprofit organization Art Division, which provides visual art training for youth in LA.

“It’s a really great program that helps young artists transition to college and into careers,” Lee explains. “And … it serves a lot of Latin American students whose families and cultures are also very diverse.” 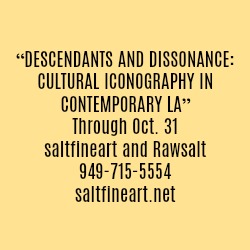 Laguna-based gallery saltfineart and Rawsalt will also be taking part in “Pacific Standard Time: LA/LA” with a showcase featuring works from Oscar Magallanes, Linda Vallejo and Sonia Romero, who visualize the mixing of iconography with culture and politics. The exhibit, “Descendants and Dissonance: Cultural Iconography in Contemporary LA,” runs through Oct. 31.

“The whole concept of ‘Descendants and Dissonance’ is the idea that … all three artists are of Mexican heritage and are very much inspired by the original Chicano movement of the [1960s and] 1970s,” says Suzanne Walsh, gallery director and a resident artist at Rawsalt.

Magallanes’ artwork offers a chilling representation of how propaganda and corporate imperialism can affect individuals. The artist combines laser-cut wood and stenciling with video clips to create pieces that take the shape of stained glass windows, propaganda posters and 3-D wooden sculptures to illustrate life, death, creation and suppression.

Also on display are pieces from Vallejo’s series “Make ’Em All Mexican,” which features gouache watercolor paintings of sacred geometry on round, handmade paper canvases. Her pieces reflect modern-day societal and political issues, and bear titles such as “52% of U.S. Latinos Experience Discrimination,” which includes color on only 52 percent of the paper.

Romero uses traditional printmaking techniques to illuminate the effects of collective trauma. Her linocut prints feature collages arranged in piles filled with images of pop culture characters such as Cinderella and Bambi. Another piece is an inverted pile of monarch butterflies that represent their migration from the U.S. to Mexico, where they typically arrive on the Day of the Dead and are believed to be ancestral spirits.

Laguna College of Art & Design (LCAD) alumna and south Laguna resident Charity Oetgen had six paintings published in the September issue of National Geographic magazine, taking her passion for combining art and animals to new heights. While showing some of her paintings at an August 2016 meeting for primatologists, Oetgen was approached by Tara Stoinski, president and CEO of the Dian Fossey Gorilla Fund, who recommended Oetgen to the magazine. Three weeks later, the artist put the finishing touches on her watercolor paintings of gorillas for an article in honor of the Dian Fossey Gorilla Fund’s 50th anniversary. Oetgen, who hopes to have a positive impact on both the environment and the animals she portrays in her work, will now be joining distinguished primatologist Jane Goodall at three events this fall as part of a tour marking the 40th anniversary of the Jane Goodall Institute. (artbycharity.com; ngm.com)

Two elements that are integral to the Laguna Beach community will be paired up this fall through Laguna Art Museum’s fifth annual Art & Nature initiative. The citywide project offers a variety of exhibitions and events that intertwine art with the natural world. It kicks off Nov. 2 with First Thursdays Art Walk, during which local galleries will showcase nature-themed art in partnership with the museum. A special installation by Mexico City-based artist Pablo Vargas Lugo titled “Seascape” will also be unveiled that day—and remain on view until Dec. 2—in the waters off of Main Beach, providing a unique take on Laguna’s ever-changing ocean landscape. Lugo will return to the museum Nov. 3 to discuss his work, and again Nov. 4 for a panel discussion on “California Mexicana: Land Into Landscape.” Also on Nov. 4, there will be a keynote speech by historian William Deverell. The event ends Nov. 5 with the Art & Nature Family Festival. (lagunaartmuseum.org)