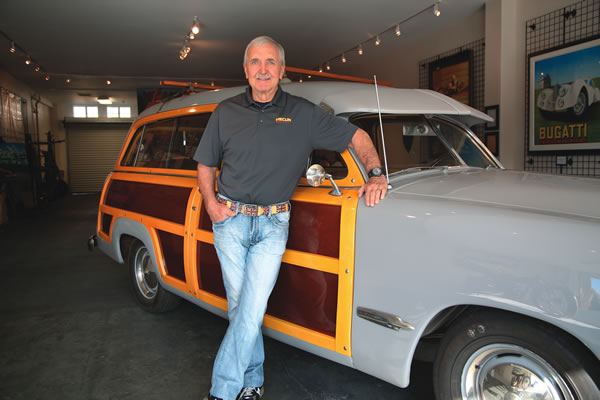 In February 2012, the doors opened to a new store on Broadway Street, a collaboration between Gavin Trippe, now motorcycle division manager of Mecum Auctions, and Dana Mecum, CEO of Mecum Auctions (which specializes in auctioning off collector, classic and muscle cars, as well as “road art” and, most recently, motorcycles). Gavin had more than 40 years of experience in the motorcycling industry, an affinity for classic cars and lived in Southern California; Mecum was looking to open a West Coast shop, so it was a match made on the raceway to heaven.

We caught up with Gavin to learn how the first year in Laguna went for the company.

Gavin Trippe: Mecum is up 30 percent out of this office. We cosigned a considerable amount of new clientele [at least 100 in Laguna Beach]. We got a bunch of new consigners and bidders just [by] having a presence and marketing. … The car people and collector community know that we physically have a presence.

LBM: You started out as an active motorcycle race promoter in the late 1970s/early 1980s. How did this transition into you getting involved with the car industry?

GT: Well, like most things, [it was] accidental. In the late ’80s, when Supercross started, I sold my business [and] then I was a manager of a Mercedes dealership. Then a friend of mine started up a software company … I got to know all the car dealers because [the company made] a leasing software that the dealers used. I reached a point where I was making a lot of money, and I thought, “I’m going to kill myself doing this,” so I moved back [to Laguna Beach] because I liked the idea of just walking to downtown.

LBM: What sets Mecum apart from other car auctioning outlets?

GT: It’s not an exclusive club; everybody is welcome. We [also] have a reserve policy: If you bring your car and don’t want to take anything less than $20,000, you still own the car if it doesn’t sell. The other thing is the Velocity Channel, which is part of Discovery [Channel] … became so popular that they now do six hours per day of auctions. And if you’ve ever watched it, it’s addictive. I get people walking in going: “Oh yeah—you’re the guys on TV.”

LBM: What is the largest auction?

LBM: How is the auction set up?

GT: We’ll start off with memorabilia—posters, signs, gas pumps—we actually trademarked [the term] “road art.” This fetches serious money. Then we start with the cars—the cheaper ones go first and the pricing goes up as the weekend progresses.

LBM: What is the highest bid at which a vehicle has been auctioned?

GT: Mecum held the record at Monterey Pebble Beach with the sale of a Shelby Cobra CSX racecar in 2009 at $7.25 million.

LBM: Mecum recently acquired a 1954 Chevrolet Corvette that was recovered from a brick-and-mortar vault in Maine after it had been entombed since 1959, per request of its owner. Is it common to find something like this?

GT: There are some weird people out there. …There’s this infinite amount of collectables … but the beauty of it is people find the stuff, and then it gets reinvented.

LBM: Do you have a particular car or motorcycle that you focus your attention on?

GT: Right now I’m rebuilding an old 1946 Triumph, and I’ve always liked old British bikes because I probably know more about them. Car-wise, I lean toward not so much the American Corvette—my first truck was an El Camino pickup, which I loved—but things like Aston Martins and Jags (Jaguars). And I like all the racecars. LBM