With ocean views, a canyon backdrop and within walking distance of 11 restaurants, the residents of Marilyn and Driftwood drives enjoy the best of all worlds. 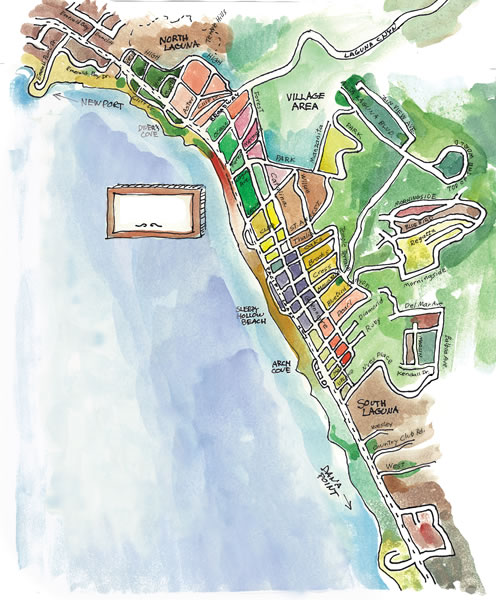 When you’re driving on Pacific Coast Highway, it’s easy to miss the neighborhood above the Albertsons shopping center unless you’re heading there for a reason. That’s exactly the way the residents of Marilyn and Driftwood drives like it. Once part of south Laguna with a different zip code, the area is now considered Laguna Beach, as the town has expanded. When Montage Laguna Beach opened in 2003, it created accessibility to Treasure Island Beach for locals and tourists alike.

“With the grocery store nearby we can shop every day, plus there’s a five-star hotel on our doorstep,” says resident Debbie Christian.

“It’s quiet. The only people who are driving around are the people who live up here,” resident Omaya Johnson explains.

Three Marilyn and Driftwood homeowners share their versions of the peaceful life—above the Montage.

The first thing you notice approaching Hans and Carmen Rey’s house are a few strategically placed boulders. “Hans and his [mountain bike]  riding friends back-wheel hop from one rock to another; I think it entertains our neighbors,” Carmen says. Considered by many to be the world’s most famous mountain biker, Hans brings a whole new meaning to bringing his work home.

Inside, the house is cozy, retaining its cottage feel. The living area is one large space with seating around the fireplace, a dining alcove in one bay window and a spacious kitchen. A pair of skis from 1922 adorns one wall. “They belonged to my grandmother who used to ski in Austria before ski runs were created,” Carmen explains. The taste for extreme sports obviously runs in the family.

There are other carefully curated antiques throughout the home, including a 300-year-old piece of Michigan timber above the fireplace, a 19th-century mirror from a Bavarian castle in the master bedroom, and a Chinese sideboard from the 1800s.

The walls are mostly white, a neutral backdrop for the furniture and antiques. There’s a pop of cornflower blue in the dining area, framing the bay window and matching the ocean beyond.

The second floor was added during a renovation in 2008, forming a master retreat with windows that slide into pocket walls for a seamless view of the ocean. The staircase is a showstopper in its own right, with a window wall creating the impression of rising into the treetops as you ascend.

Outside, there’s a waterfall, a meandering stream and a goldfish pond, plus a pool and hot tub. There’s also a separate guest room, which Carmen jokingly refers to as “the opium den,” since she painted one wall bright green, with a large golden poppy. “People love to sleep out here; it’s completely private.” Above the guest room, there’s a sun deck, ideal for alfresco dining and watching the sunset.

As for why they love living here, Carmen sums it up: “I can work from my office, take Kobe out on the trails, have lunch at the Montage, play a round of golf at Aliso Creek Inn and Golf Course, then head out to dinner, all without using the car.”

A few doors up from the Reys is the home of the Christian family. From a similar 1950s cottage footprint, this home has been transformed. “We wanted clean, contemporary and minimal with lots of straight lines,” Debbie Christian explains. When the family moved into the house in 1997, it was ideal for their needs. “The [twin] girls were 18 months old, so having everything on one level with a fully enclosed yard was perfect.”

Fast-forward seven years and it was time for a change. The home was gutted and completely rebuilt, adding a second floor in the process. At the front, there’s an outdoor seating area surrounding a fire pit made with shards of amethyst-colored glass. Inside the spacious living area, the purple accents continue through pillow fabric, a focal wall in deep plum and even the paintings on the walls. Local Laguna Beach artist Vladimir Prodanovich painted two of the pieces in the living room, while artwork sourced from the south of France graces the walls in the dining area.

Debbie designed the interior herself. “I got most of my inspiration from British design magazines,” she says. Indeed, this expatriate family decided to live in Laguna Beach when they relocated from London because of its European flavor. “The landscape and the small beaches feel like the French Riviera, and the fact that Laguna has a real downtown area is very British.”

The new second floor is a private master suite with a bathroom, walk-in closet and an ocean-view deck. There’s also an office for two, overlooking the living area and the ocean beyond. “I think the master bathroom is my favorite spot,” Debbie says. With a large tub open to the bedroom area and a shower with a view of the ocean and Catalina Island, it’s the perfect spot to relax.

Overall, it’s the sense of stability in the neighborhood that the family loves. “There’s very little turnover on the street. … People stay for generations,” explains Debbie. “We’ll be here for a long time too.” 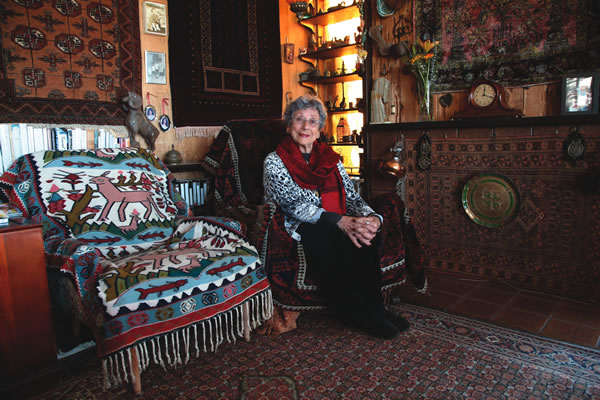 Omaya Johnson vividly recalls the first time she entered her current home back in 1965. “I dropped to my knees and I cried because it felt like I was back in Lebanon.” Born Omaya Hassan Charaf in Damascus, Syria, she and her late husband, Keith Johnson, moved to the U.S. in 1955. They came to Laguna Beach for the first time with one of her daughters’ teachers, who had built a spec home on Driftwood Drive but never lived in it. As chance would have it, the house was for sale. Omaya immediately knew she was home.

Now 90 years old, Omaya has lived in this house for 48 years. “When we moved in, everything was blue and white and there was no deck,” she explains. Her husband installed tile countertops and flooring in the kitchen, and then built the huge wraparound deck and patio. With panoramic views of the Pacific, there’s plenty of space for seating. Hilary Arndt, Omaya’s daughter, held her wedding reception here.

Omaya’s Middle Eastern heritage is showcased throughout the house, especially in the living room. Kilims (tapestries), carpets and artifacts abound—on the floors and the walls—creating an ambiance that feels like you’ve stepped into another world. “I was homesick and I wanted to feel comfortable,” she says.

The master bedroom houses more colorful kilims, as well as two whimsical mobiles Omaya made. Created from baskets, small perfume bottles and antique keys, they hang from the ceiling at the foot of the bed. Photographs and memorabilia depict decades of family history.

The home retains its 1960s vibe but with modern updates and its unique decor. The living room has even been used for sixth-grade field trips, showing kids firsthand elements of Arabic art and culture, along with indigenous food.

Above all, Omaya loves her home because of its location. “We’re in a cul-de-sac, it’s very quiet and it’s a flat lot with a wide house. That’s rare in Laguna,” she says. In fact, people occasionally knock on her door to see if she’s interested in selling. But after almost 50 years, Omaya is here to stay. LBM