Artist Doug Miller has made his mark in Laguna as a talented painter, photographer and musician, not to mention a treasure trove of local history. 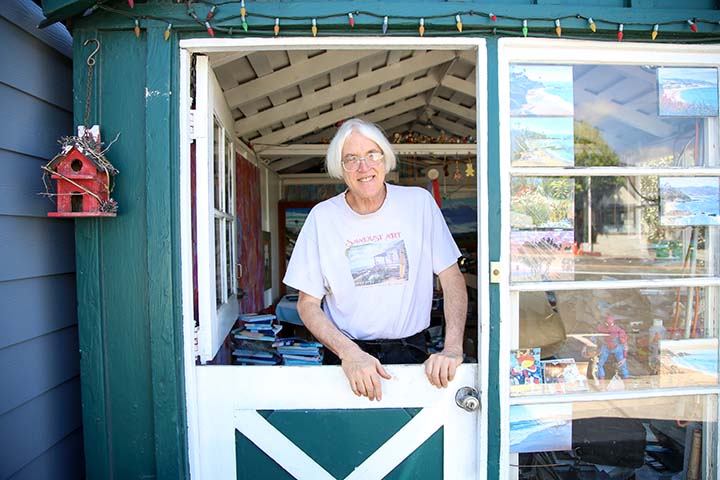 There’s a small, green studio on South Coast Highway, just up the street from Wood’s Cove, that’s unlike any other. It’s sandwiched between Romantic Boutique and a vacant building, and the windowsill is packed with cartoon figurines and knickknacks all vying for a spot to be bleached out by the sun. If the seasoned Dutch door is propped open, you’ll see that it’s overflowing with years of artwork. There are thousands of little 3-by-5-inch canvases and a handful of larger pieces stacked in Jenga-like piles covering nearly every inch of floor space. If a passerby is truly lucky, they’ll meet the man behind the madness—which really isn’t madness at all, because artist Doug Miller meticulously catalogues each and every piece. He’s lived in Laguna for nearly 44 years and is a true testament to our roots as an artist-loving town.

Longhaired, lanky and bespectacled, Doug is a painter, violinist and photographer, but above all he is a self-made historian. From the leather-bound notebooks that catalog every painting he has started, completed and sold, to the collection of CDs featuring his music and the thousands of negatives he has archived with names, dates and locations, Doug diligently records the intricate details of it all.

For those still trying to put a face to the name, Doug is the unmistakable character around town—in the trolley or otherwise—always manning a camera, and can most often be found at the Sawdust Art Festival grounds during the summer months. If he’s not on the entertainment deck, he’s posted in his booth asking for names and birth dates for his unique canvas-turned-visitor-log he calls the “Birthday Paintings.” Doug realized long ago that “people just wanted to be a part of what’s going on,” as he puts it, so he began taking notes of all the people, places and things he encountered and/or created. Fellow Sawdust artist and friend Sandra Weir is quick to note this is what stands out about Doug.

“Since I’ve known Doug, he has had a pace in his life, and that pace has never changed,” Sandra explains. “He has this pattern that he’s set for himself, and he just continues that pattern. It’s fascinating; I don’t know anyone who has that dedication here in town to get up and paint every single day—not to mention all the other things he’s doing.”

In 1993, Doug made it a personal “law” to start at least one painting a day. Today, he’s completed upward of 15,000 acrylic paintings, and he says he’s still adamant about starting one, usually two, paintings a day—typically completing a few on the same day. Art is what attracted Doug to Laguna Beach in the 1970s after he served in the Navy, and he’s been here ever since. For five to six hours every day, he can be found sitting in a chair in his current studio-home, amongst his art, creating more.

“On average, I tend to paint more complicated [pieces] and my better stuff when I’m more calm and I feel like I have more time in front of me,” Doug explains. “… If not, I choose fresh and bright colors and get it done quick.”

When the paintings get too intricate, Doug says they tend to get academic, which leads to burnout—the biggest enemy of any artist. Since Doug doesn’t drive, he finds his subjects in the beauty around him. Luckily, he prefers to capture the more popular, prolific beach scenes native to Laguna, and he favors the small, less time-consuming canvases.

“If I did just large pieces, I’d probably starve out there, but the little ones get snapped up,” Doug says of his business model. “And if I did just a few small ones, people wouldn’t care either. It’s that I have several hundred wrapped up, and people find their treasures.”

To keep up with his high personal demand, Doug spends $500 to $600 on 3-by-5 and 8-by-10 canvases a few times a year. Each batch lasts three months at the longest, and undergoes the same process: When a piece is started, it’s recorded; when completed, it gets a red mark; and when it’s sold, an underline. The goal is to sell the lot at the Sawdust festival each year.

Sandra says it’s always easy to find Doug and his art. “He’s always built his booth in a very avant-garde way,” she recalls. “Instead of it being a square, he has pieces of wood that triangulate, … [and] he uses tiny little pieces of wood to build a booth instead of using new lumber. … But at the end of the day, it looks incredible.”

Doug secured a booth at Sawdust from day one of moving to Laguna, and he’s been there ever since. He quickly took a loving to the people and the culture at this annual festival—he and his wife, Becky, even got married on the Sawdust grounds in 1979.

This year marks Doug’s 45th year as a Sawdust artist, and he has proudly kept the same booth toward the back of the festival site near the stairwell—thanks in part to his frozen seniority. And it’s not just Doug’s art for which he is known around The ’Dust; in addition to the brush, he’s skilled with a bow.

“On crowded days, he would get his violin and he would walk through the grounds making the sound of an old-fashioned ambulance,” Sandra recalls. “… People would look and get smiley; he was an uptick in the energy there at the show.”

Doug’s infectious joy as articulated through his violin doesn’t stop with his attention-catching sounds while wandering amid the festival-goers. In fact, Sandra says, growing up at Sawdust you could guarantee seeing Doug bounce between his booth and the stage.

“When I was young, I used to sit on the entertainment deck and [Doug] would be invited by the different bands to come and accompany them, and his violin just seemed to complement every single band he was invited with,” Sandra adds. “… The band was great before, but then when you added Doug, it just added a whole new facet to each band.”

“We’re not rock ’n’ roll; … that’s just pointless energy,” Doug says. “We get people teary-eyed with some of our stuff, and we get people excited and up with the other stuff.”

As the story goes, singer Grace Freeman asked if the band name could have “moon in it, please.” Doug, listening intently, says he heard the phrase “moon police” rather than “moon, please,” and, thus, The Moon Police was born. The band plans to release its first CD this April—the sixth Doug has released with his longtime friend and singer, Sasha Evans.

Unlike his music or his paintings, Doug’s photography isn’t for sale. Instead, he’s using a modern forum to breathe new life into his vintage pictures. Doug, an adamant defender of the beauty of black-and-white photography, says he’s scanning and mass uploading thousands of photos to his Facebook page every few months. This has translated into nearly 1,800 virtual albums, and the only trouble he’s encountered is not due to the amount of uploads, but rather, the history.

He now regularly comes across Facebook comments between people who moved out of town years ago and those they knew years before.

“That’s a really neat thing and that’s where my photography is now,” Doug says. “I’m doing the endgame, so to speak, on my photography—making it count.”

All this is possible because he decided early on to start keeping track of his encounters—although he learned the hard way not to rely on a notebook after losing one on a trolley. Instead, Doug has the names of everybody he has photographed—thousands of them—all cataloged in a book he keeps close by the negatives; on the back of each developed proof sheet, he details the information to correspond with each photo when held to the light.

“In the ’70s and ’80s, I was everywhere and went to every function in the town because I had my purpose—I had my camera and I was taking pictures of everybody,” he says, adding that people were happy to let him go about his business because they just wanted to be included in what was going on. This understanding is what strikes Sandra.

To facilitate his hobby, Doug built a darkroom into a nook in his house, taking over a closet and part of the space between the living room and kitchen. In this photography alcove, he would spend hours focused on his black-and-white photos, dismissing color as more of a novelty. The collection has since outgrown his in-house storage, but Doug is still shooting—capturing people and paintable scenes along the way.

“How much stuff can you have?” Doug muses as he peeks into the storage shed he built in his backyard to house his constantly growing collection of negatives. “But it’s important stuff … every one of these is an absolute treasure.”

Film documents Doug Miller’s work on the canvas, behind the lens and onstage.

Doug recently added a fourth talent to his growing list: actor. Well, not so much actor as subject of a documentary filmed by Jason Blalock. Jason first encountered Doug as a child running around Laguna Beach, but he reconnected with Doug after noticed his photography being shared across Facebook—and says he saw a story waiting to be told. So when Jason approached Doug about a documentary, the artist said, “Why not?” And thus began months of capturing the essence of Doug on film, culminating with the pre-release of the documentary, “Sawdust and Sand: The Art of Douglas Miller,” at Laguna Art Museum last December.

The line that night wrapped down around Cliff Drive, and people were being turned away. Doug greeted his supporters in the best way he knew how: by reciting “Poets,” his roughly four-minute comical poem composed entirely of artists’ names.

The documentary was a hit, but Jason’s critical eye, of course, caught some cleaning up that needed to be done. Doug says he’s since added more footage of his musical pursuits in the hopes of expanding the documentary to 50 minutes to make it eligible for a TV slot. “Sawdust and Sand” premiered at the American Documentary Film Festival in Palm Springs, and it will be shown locally at the Newport Beach Film Festival.